Seoul: South Korean officials have warned against prematurely calling the peak of the coronavirus outbreak while expressing hope the country is nearing a "turning point" in the crisis as the pace of new infections slowed.

The Korea Centres for Disease Control and Prevention (KCDC) reported 69 new coronavirus cases on Monday. The new cases brought South Korea's total infections to 7382, while the death toll rose by one to 51, the KCDC said. The rate of increase in new infections fell to its lowest level in 10 days.

"I'm still extremely cautious but there's hope we can reach a turning point in the near future," Prime Minister Chung Sye-kyun said on Monday before returning to Seoul from the hard-hit southeastern city of Daegu. 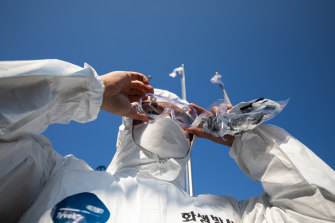 A South Korean soldier adjusts his goggles before setting off on a disinfecting mission as part of South Korea’s multi-billion dollar coronavirus blitz.Credit:Bloomberg

Health authorities say the number of new infections being identified has dwindled as most of the roughly 200,000 followers of a fringe Christian church at the centre of the epidemic in Daegu have now been tested.

Vice-Health Minister Kim Gang-lip said it was premature to say the crisis was over as new cases continued to emerge from smaller clusters.

"There are still many patients arising from Daegu and nearby regions … and sporadic infections continue to emerge elsewhere, though they're not spreading as fast," Kim told a briefing.

"In fact, now is the time to concentrate all our capabilities to bring a clear reduction in infections."

The symptoms of coronavirus include:

If you suspect you or a family member has coronavirus you should call (not visit) your GP or ring the national Coronavirus Health Information Hotline on 1800 020 080.

China's reduction in new cases also continued. Walt Disney Co's Shanghai Disneyland, which shut on January 25 amid coronavirus concerns, will resume a limited number of operations at its resort as part of a phased reopening, although the main theme park will remain closed.

In Europe, there was a sense that the worst of the coronavirus epidemic is still to come.

Deaths in Italy attributed to COVID-19 spiked, hitting 366 on Monday morning Australian time, just a day after the government approved a draconian plan to quarantine 16 million people in the country's north. The numbers were likely to rise further overnight.

Total coronavirus infections in Italy rivalled South Korea for the unenviable title of the second-worst-hit nation after China, where the virus originated.

Infection tallies in France, Germany and Britain also spiked as Europe struggled to contain the outbreak and questions grew over whether the true number of infections could be far higher than reported. 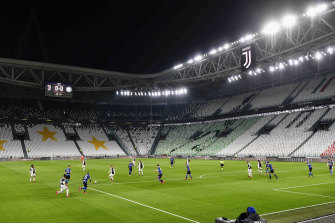 Inter Milan and Juventus played one of the biggest matches of the season in an empty stadium in Turin, with attendance at large sporting events banned in Italy until April as a coronavirus containment measure.Credit:LaPresse

Panic buying hit supermarkets in Britain and French President Emmanuel Macron was expected to convene an emergency meeting on Sunday night to determine what containment measures will be needed to control the growing infection rate.

A hotter-than-normal weather forecast for Europe in March, April and May is fuelling hope the spread of the virus could be slowed following a Harvard University study that showed the lifespan of the flu virus was considerably shorter on hot surfaces. Experts hope the coronavirus is similarly heat-sensitive.

In the US, which had 554 confirmed cases on Monday afternoon Australian time, the State Department advised citizens to avoid travelling on cruise ships because of the risks of coronavirus.

The extraordinary statement came on the day a cruise ship due to dock at Port Everglades after a Caribbean tour was held off Fort Lauderdale beach for hours while two crew members were tested for the rapidly spreading virus.

Several cruise ships worldwide have been forced to suspend their journeys and refused permission to dock in host countries after outbreaks on board the ship. The worst-hit was the Diamond Princess cruise ship which was under quarantine at Yokohama in Japan. 700 of the ship's 3700 passengers were infected with COVID-19.

US universities Stanford, Columbia and The University of Washington cancelled in-person classes for the final two weeks of the academic quarter amid rising concern about the outbreak and switched to virtual classes.