A married woman was flogged 100 times after confessing to adultery in Indonesia while her male partner, who was also married, received just 15 lashes.

The woman’s flogging in the conservative Aceh province on Thursday was briefly paused because she couldn’t bear the pain, according to an AFP reporter.

The Aceh region in Western Indonesia is renowned for being a conservative area and the only part of the country where Sharia Law is used.

Ivan Najjar Alavi, the head of general investigation division at East Aceh prosecutors office, said the court handed down a heftier sentence for the married woman after she confessed to investigators she had sex out of her marriage.

Judges found it difficult to convict the man, who was then the head of East Aceh fishery agency and also married, because he denied all wrongdoings, Alavi added. 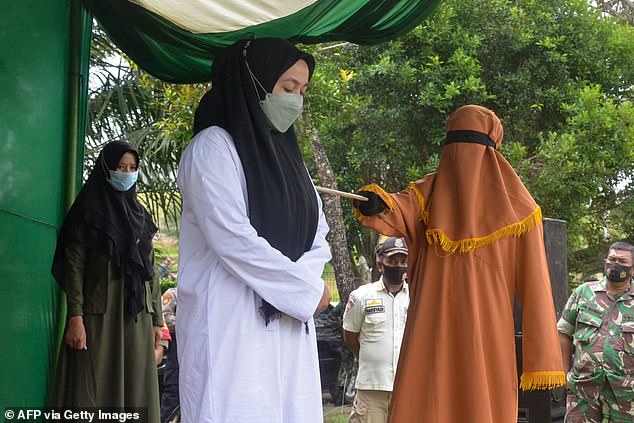 ‘During the trial, he admitted nothing, denying all accusations. Thus, [judges] are not able to prove whether he is guilty,’ Alavi told reporters after a public flogging for Sharia law offenders in East Aceh on Thursday.

As an alternative punishment, the judges found the married man guilty of ‘showing affection to a female partner who is not his wife’ after the couple were caught by locals at a palm oil plantation in 2018.

He was initially sentenced to 30 lashes but his successful appeal at the Sharia Supreme Court in Aceh reduced the sentence to 15.

Another man, who was convicted of having sex with a minor, was also whipped 100 times on Thursday and will also serve 75 months in prison for the crime, according to prosecutors.

Dozens watched, recorded and posted Thursday’s flogging on social media, a spectacle criticised by rights groups but one which regularly attracted hundreds before the pandemic.

Aceh is the only region in Muslim-majority Indonesia to impose Islamic law, which allows whipping for charges including gambling, adultery, drinking alcohol, and gay sex.

Once one of the most powerful Islamic sultanates in Southeast Asia, the area had long used an informal kind of Islamic law mixed with local laws, known as ‘hukum adat’. 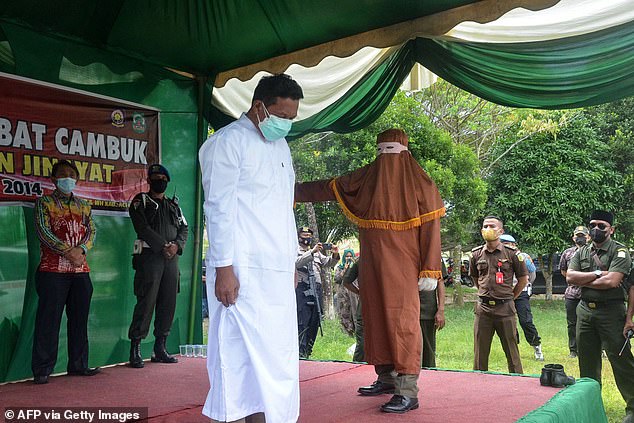 Judges found it difficult to convict her partner, a married man (pictured), as he denied all  wrongdoings. He was given 15 lashes on Thursday

As part of that deal, Aceh won the right to be the only Indonesian province to use Islamic sharia law as its legal code.

The laws have been gradually expanded to more offences, most recently in 2014, when Aceh approved an anti-homosexuality law that can punish anyone caught having gay sex with 100 lashes.

Engaging in homosexual acts is not a crime under Indonesia’s national criminal code but remains taboo in many conservative parts of the country.

The public beatings have become more prevalent in recent years with a number of reported incidents of those being punished collapsing in pain on stage.

Religious police in Aceh have been known to target Muslim women without head scarves or those wearing tight clothes, and people drinking alcohol or gambling.

Over the past decade, the central government has devolved more power to regional authorities to increase autonomy and speed up development.

Human rights groups have slammed public caning as cruel, and Indonesia’s President Joko Widodo has called for it to end. But it has strong support among Aceh’s population.