Home » World News » What are the ‘Jesus died for me what an idiot’ t-shirts?

"JESUS died for me what an idiot" is trending on social media.

Shirts containing the phrase are apparently going fast on Amazon. 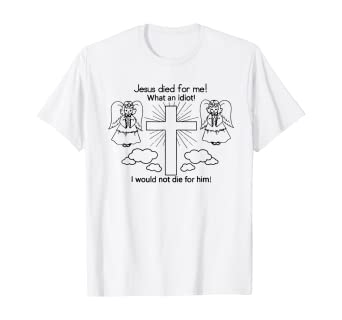 What are the 'Jesus' t-shirts?

T-shirts containing the phrase "Jesus died for me what an idiot" are being sold online, including on Amazon.

The phrase "I will not die for him!" is also featured on the shirt.

The shirts come in five different colors, including white, and and are lightweight.

What are people saying about the 'Jesus' shirts?

People are raving about the shirt online.

"My christian friends don’t like it…PERFECT :)" one buyer wrote on Amazon.com.

However, others are disappointed and criticizing the shirt.

"Why would you even sell this, is this a joke?" wrote another.

Sweatshirts with the same phrase are also been sold, and one person was criticized as an "idiot" on Reddit for wearing it.

"Around here a sweatshirt like that would probably get someone beaten up," another person wrote.

"I would fear for their safety."

Another user wrote on Reddit: "Interesting. I didn't even think it was that mocking of Christianity, I thought it was more going for shock value.

"Most Christians say they would die for jesus so they tend to expect people to agree with it, but as an atheist I can say I probably wouldn't die for jesus.

"Dunno, maybe it's a little jab, but I'd say on the same level as saying 'hey look I drew the prophet mohammed!'"