Home » World News » ‘Voting with their feet’: Working fathers demand more freedom to be with kids

Michael Gunner’s resignation as Northern Territory chief minister while on paternity leave is perhaps the highest-profile example of what Australia’s workplace observers have dubbed a post-COVID “recalibration” among working dads.

Like Gunner – who moved to the backbench after declaring this month that “my head and my heart are no longer here, they are at home”, with his wife, their two year-old and new baby – many working fathers are reassessing what really matters, say work and family observers including National Children’s Commissioner Anne Hollonds. 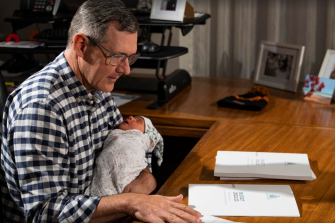 The then Northern Territory Chief Minister, Michael Gunner, with his new baby, Nash, shortly before he handed down the 2022 budget this month.Credit:Michael Gunner

COVID lockdowns have shown many dads what they stand to miss, especially if they have not been around much to see the early months of their first babies’ lives.

Not all fathers have the luxury of cutting back their workload, or demanding flexibility to allow them to be present and hands-on, but those who do – often those who are in more senior roles – are increasingly making this happen, especially if they have more than one child.

“I think there’s been a recalibration, people are thinking about the way they’re going about their lives … and a lot are realising working all the time, if you don’t have flexibility, it’s incredibly difficult to manage a family with children,” says Georgie Dent, executive director of childcare lobby group The Parenthood.

“What we need to work and care for family has become crystallised through COVID.”

“People are feeling a bit empowered to make decisions based on what really works for them and not just the expectation and status quo [assumption] that there’s nothing that matters more than an all-consuming job.” 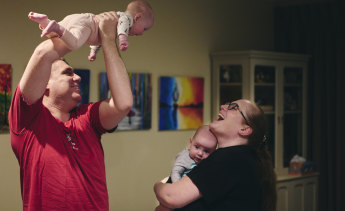 Rob Morris has 120 staff in a large IT and engineering-services provider, but was determined not to miss his babies’ fisrt yeas and has dropped back to part-time work.Credit:Rohan Thomson

Rob Morris, a Canberra-based senior executive at IT systems provider Leidos, has a high-level management role and 120 staff, but was not going to miss the early years of his twins, Lucy and Samuel.

After his wife, Sarah, gave birth in December, Morris took three months parental leave, then worked three long days a week for the first month after he returned. He will now work four days a week, spending Tuesdays and Thursdays in the office, and leaving at 4pm on Tuesdays to go home and walk his babies with Sarah.

“COVID has opened people’s minds to more flexible work arrangements – I would like to hope everyone starts to look into it [because] family is so important,” he says.

“It has felt natural and not like a challenge to get the flexibility: I haven’t encountered anyone in this process who has made me feel in any way that I’m not doing my job, they’re like, ‘Rob, go be with your family’ or, ‘How can we help you?’.”

Morris’ company is one of 70 organisations certified on Tuesday as Family Inclusive Workplaces under UNICEF Australia’s National Work + Family standards initiative, supported by the federal government.

Prue Gilbert, chief executive of Grace Papers – the consultancy used by Morris’ employer to coach it in family-friendly strategies – says the shift towards men insisting on being able to participate more in the lives of their young children is so evident that in some large organisations almost 50 per cent of parental leave is taken by fathers.

“There is definitely a movement of men who want to play a bigger role in family life and we’re seeing it … even in male-dominated organisations,” Gilbert says.

Children’s Commissioner Anne Hollonds, a former director of the Australian Institute of Family Studies, says until recently Australia lagged behind similar economies in its attitudes to men being hands-on fathers. However, younger, corporate fathers are changing this.

Gunner’s emotional announcement that he needed to be with his family felt significant (even though a political rival has since claimed that his resignation came as the territory’s Independent Commissioner Against Corruption investigated travel expenses made by some of the chief minister’s team before the 2020 election).

“A lot of dads would not be in a position where they could just resign, that is not an option, and if they are not in one of those big companies that is very generous, then they really do miss out,” she said.

Seeing public figures discussing fatherhood being a priority makes other men feel more able to use paternity leave policies that they may be entitled to at corporate employers. “When it’s more socially acceptable to take it, and [prominent men] do take it, that gives social permission to do it,” said Hollonds.

“In Australia, we’re still a bit embarrassed about [men taking parental leave], people are a bit reluctant to ask their boss, which makes use-it-or-lose it policies important.”

More senior men who have the benefit of competitive employers were “leading by example” and using flexibility policies, which makes other more junior staff feel freer to do the same.

“What we need to work and care for family has become crystallised through COVID, now many workers are looking for jobs that enable them to do both, and if they’re not getting that from their employer, they’re voting with their feet at the moment,” he said.