Van Gogh painting seized by the Nazis from Rothschild family in occupied France becomes the Dutch master’s most expensive watercolor as it sells for record $35.9 million in New York

A Vincent van Gogh landscape seized by the Nazis from the Rothschild family during their Second World War occupation of France has sold at auction in New York for $35.9 million, a record for a watercolor by the Dutch impressionist.

The 1888 work, ‘Mueles de ble’, was purchased by an undisclosed buyer for well above its pre-sale estimate of $20-30 million, auction house Christie’s said. It was last exhibited in 1905 in Amsterdam.

‘Mueles de ble’ (Wheat stacks) by the Dutch master depicts a rural farming scene in Arles, France, where van Gogh lived for more than a year in the 1880s.

The painting shows farmers harvesting wheat in a Provençal farmyard, with tall stacks of golden hay and a a cluster of farmhouses set against a bright blue sky.

Unlike Van Gogh’s best-known work, which were painted with oils, the painting was executed in watercolor, gouache, pen and ink on paper.

The painting formed part of the Cox collection with two other works in oil by the artist, which fetched $71million and $46million. 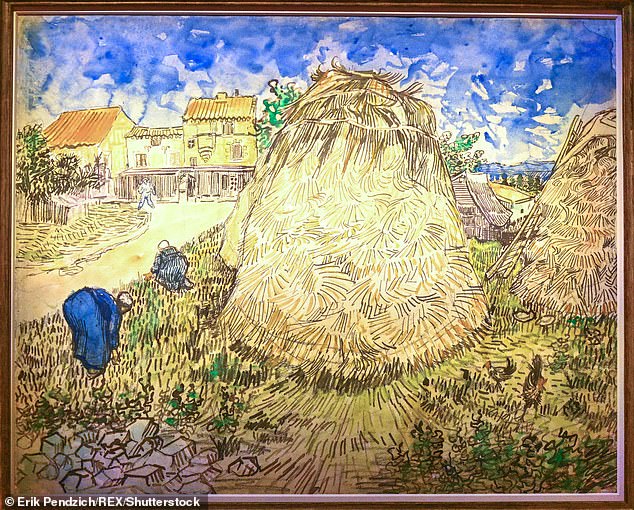 Pictured: ‘Meules de blé’ by Vincent van Gogh on display during the ‘The Cox Collection: The Story of Impressionism’ auction at Christies on October 29, 2021 in New York. The painting by the Dutch master has sold for $35.9 million dollars

The work was initially owned after the artist’s suicide at 37 by his brother, Theo van Gogh, and was bought by German collector Max Meirowsky in 1913.

When the Jewish collector sought refuge from the Nazis in Amsterdam, he gave the work to a German art dealer in Paris for safe keeping.

In 1938, he sold it as the persecution of Jews began to escalate in the country, and by 1940 it was in the possession of Alexandrine de Rothschild, a member of the French branch of the wealthy Jewish banking family.

However, it was soon confiscated by the Germans in 1940 during the Nazi occupation of France in the Second World War.

Following the war, the painting’s whereabouts was unclear until 1970s when it resurfaced as the property of oil tycoon Edwin Lochridge Cox, who bought it from the Wildsenstein Gallery in New York late in the decade.

Cox hung the painting in the drawing room of his mansion in Dallas. His ownership of the painting was kept a secret to everyone but his closet friends until his death last year, according to The Art Newspaper.

Christie’s purchased the work through a settlement with the collector and heirs of Meirowsky and Rothschild, allowing it to be sold.

One of the features of Mueles de ble, the Mas de Griffeuille farmhouse seen in the top-left behind the hay stack, can still be found mostly intact in Arles today.

It is found in the eastern suburbs of the town in amongst more modern apartment blocks. 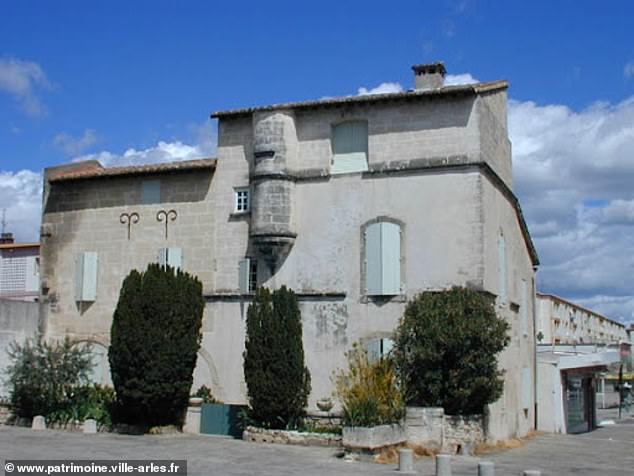 One of the features of Mueles de ble, the Mas de Griffeuille farmhouse seen in the top-left behind the hay stack, can still be found mostly intact in Arles today (pictured, file photo) 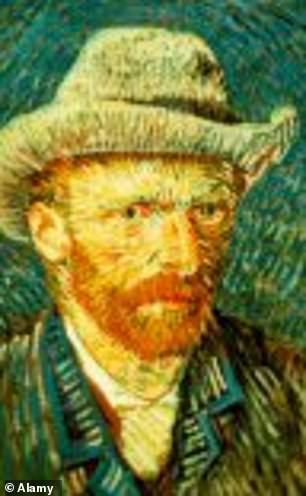 Pictured: One of Van Gogh’s self portraits

Mueles de ble becomes the most expensive Van Gogh watercolor to ever be auctioned, after an earlier watercolor by the artists sold for almost $17million.

However, it is far from being the most expensive Van Gogh painting ever sold.  His Portrait du Dr. Gachet (1890) sold for around $81.5million in 1990.

In total, Christie’s raised $332,031,500 from the Cox collection auction – well above the estimated $228million. The collection also included works by Claude Monet and Pierre-Auguste Renoir.

Van Gogh is considered one of art’s greatest and most influential painters, although he saw little commercial success during his lifetime.