Johnson & Johnson’s single-dose Covid vaccine has finally been authorised for use by the UK medicines regulator but it will not be available until later this year.

Health Secretary Matt Hancock hailed the jab as another ‘another weapon in our arsenal to beat the pandemic’.

The vaccine can be stored at fridge temperatures, between two to eight degrees, making it ideal for distribution to care homes and other locations across the UK.

Professor Jonathan Van-Tam, previously said could be used for hard-to-reach groups of people, where recalling them for a second jab is not always successful.

Health officials believe the one dose schedule could be more appealing to vaccine-hesitant Britons, who they fear are harder to convince to turn up for two appointments.

The vaccines currently being rolled out in Britain require two doses, given three months apart.

Britain originally ordered 30million doses of J&J’s vaccine but the order has been reduced to 20million these are not expected to start arriving until mid-summer.

In April, the European Medicines Agency said a warning about unusual blood clots with low blood platelet count should be added to the product information for the vaccine.

This followed eight cases of blood clots in more than seven million people vaccinated in the US. 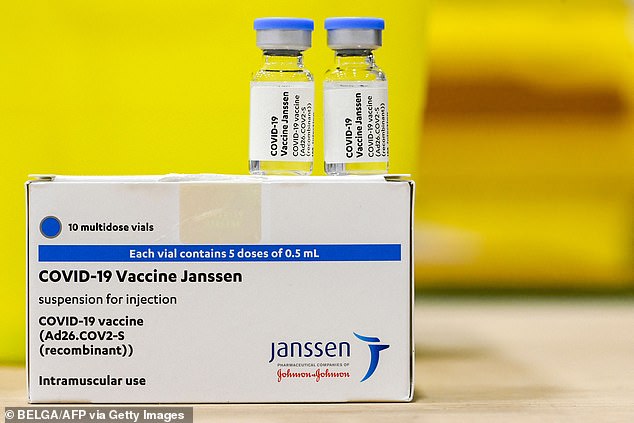 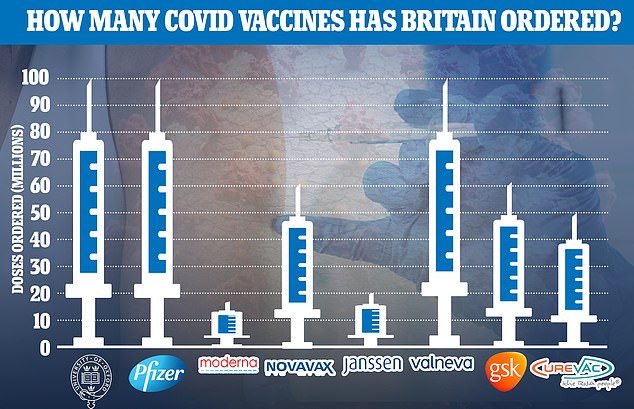 Britain originally ordered 30million doses of the Johnson and Johnson, or Janssen, vaccine but its order has been reduced to 20million

Germany is to make Johnson & Johnson’s Covid vaccine available to all adults.

The country’s Health minister Jens Spahn announced the plans earlier this month, adding the shots will be offered on the advice of a doctor.

But it left it up to the European Union’s member states to decide how to use it.

Germany’s move to offer the J&J single-dose vaccine widely follows the lifting of restrictions last week on the AstraZeneca vaccine.

The AstraZeneca shot had been earmarked for people aged over 60 following similar reports of very rare but sometimes fatal clotting events in younger people, with women disproportionately affected.

Health and Social Care Secretary Matt Hancock said: ‘This is a further boost to the UK’s hugely successful vaccination programme, which has already saved over 13,000 lives, and means that we now have four safe and effective vaccines approved to help protect people from this awful virus.

‘As Janssen is a single-dose vaccine, it will play an important role in the months to come as we redouble our efforts to encourage everyone to get their jabs and potentially begin a booster programme later this year.’

As with all vaccines, the government is in regular contact with the manufacturers, including exploring how best to optimise supply across the current programme and preparing for a potential booster programme from later this year.

The Vaccine Taskforce originally secured 30million doses of the Janssen vaccine last year, based on the predicted clinical need at the time.

With the UK’s Covid vaccination programme continuing at an unprecedented scale and pace, the government has decided to amend its original order to 20million.

The Joint Committee on Vaccination and Immunisation (JCVI) will submit updated advice for the Janssen vaccine before doses become available.

Vaccine Deployment Minister Nadhim Zahawi said: ‘The Janssen vaccine will be another weapon in our arsenal to beat this pandemic.

‘We are doing everything we can to vaccinate all adults as quickly as possible and I encourage everybody to come forward for a jab as soon as they are eligible.’

In a clinical trial involving 43,783 people, published earlier this year, the level of protection against moderate to severe Covid infection was found to be 72 per cent in the United States arm of the trial. 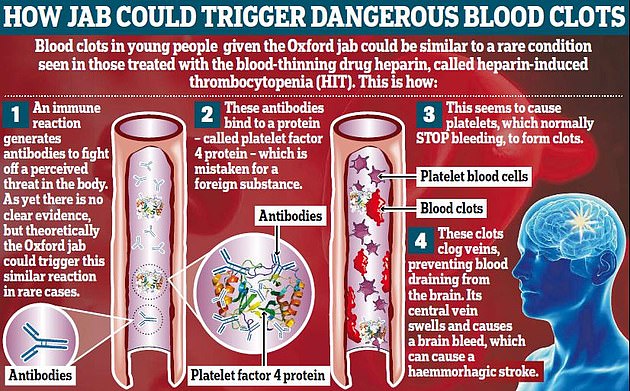 Data on clots has spooked health chiefs across Europe, with Denmark stopping the use of the jab completely and other nations restricting its use to older age groups.

Britain has already recommended all under-40s should be offered an alternative to the AstraZeneca vaccine — which uses the same viral vector technology as Johnson & Johnson’s jab — but only because infection rates are so low.

UK health chiefs say the benefits of Astraenecaa’s two-dose jab for younger adults, who rarely get very ill with Covid, no longer clearly outweighs the risks.

Regulators say the risk of suffering a blood clot after the jab is vanishingly small, but is higher in younger age groups at an estimated one in 60,000. Clots are happening alongside low platelet levels, a condition named thrombocytopenia.