The UK’s foreign aid budget is set to fall below £10billion in 2021/22 as Dominic Raab confirmed the spending cut and said there are ‘no easy choices’ as the coronavirus crisis wreaks havoc on the public finances.

The Foreign Office today set out how much each Government department will be given to spend on official development assistance (ODA) in the next financial year.

And the estimated total figure is £9.985billion – significantly lower than the approximately £15billion which has been spent in recent years.

The confirmation of the cut comes after Chancellor Rishi Sunak announced at the Budget in November that the UK was slashing its aid commitment from 0.7 per cent of gross national income to 0.5 per cent.

Mr Raab defended the reduction this afternoon as he told the International Development Select Committee that ‘you have got to cut your coat according to your cloth’. 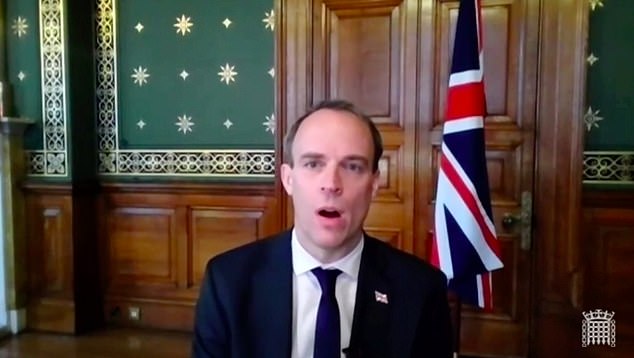 Mr Raab told MPs: ‘The Foreign Office is dealing with, as the rest of Whitehall is, the implications of Covid on the economy, the public finances as you know, the biggest contraction we have been through in 300 years, double the budget deficit that we faced after the financial crash.

‘I think we all have to look at that and I had long, as you can imagine, quite intense, in detail, focused discussions about this before we took the decision.

‘But I understand there are no easy choices across the public service and public sector piste.

‘The first thing to say is we have still got £10billion worth to spend in the year that is coming.

‘This still leaves us as one of the top ODA spenders on DAC definitions. But you have got to cut your coat according to your cloth.’

The Foreign Secretary set out the 2021/22 aid spending figures in a written statement to Parliament.

Highlighting the financial context in which the budget cut was agreed, Mr Raab said the UK is facing a ‘budget deficit of close to £400billion’.

He said: ‘At 19 per cent of GDP this is around double that of the last financial crisis.

‘As announced last year, given the impact of this global pandemic on the economy and, as a result, the public finances, we will move to a target of spending 0.5 per cent of GNI as ODA in 2021.

‘This is a temporary measure and we will return to 0.7 per cent when the fiscal situation allows.’

But Mr Sunak insisted at the time that keeping the commitment was ‘difficult to justify’ during the coronavirus pandemic as ministers borrow billions of pounds to keep the UK afloat.