London: The British government has called a meeting with its sports authorities and broadcasters to discuss how events could be staged without fans present if the coronavirus outbreak escalates, two people familiar with the matter said.

The department in charge of sport will meet on Monday with sports governing bodies including soccer and horse racing to discuss all outcomes including the possibility that some events could be staged behind closed doors if mass gatherings are banned, one source said. 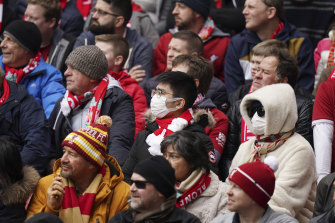 Sky News sports correspondent Martha Kelner reported that another contingency being considered was advising people over 70 not to attend matches or even banning them. People over 70 are at higher risk of death from the COVID-19 illness.

The department declined to comment. A third person said they have been in regular dialogue with the government for some time.

Britain's four-phase plan for dealing with the virus is currently in its initial "containment" stage but preparations for the next phase – known as "delay" – are advanced.

A planning document published earlier this week said that in the delay phase the government would consider taking action to reduce the number of large scale gatherings to help slow the spread of the disease throughout the population.

One person has died in Britain from the virus so far and more than 160 people have tested positive.

Italy has ordered all major sporting events throughout the country, including top-flight Serie A soccer games, to be played without fans for one month in a bid to curb Europe's worst coronavirus outbreak.

In England, the top-tier soccer Premier League is two thirds of the way through the season and is due to end in May. The Six Nations rugby union championship has already been disrupted, with games in Italy and Ireland postponed.

Some matches in the UEFA European Championship soccer tournament, including the final, are due to be held at London's Wembley Stadium in June and July.