Acclaimed Ugandan author Kakwenza Rukirabashaija, a well-known critic of the country’s authoritarian President Yoweri Museveni and his son, Lt. Gen. Muhoozi Kainerugaba, has been arrested and detained by the government on unknown charges.

“I’m under house arrest. Men with guns are breaking my door. They say they’re policemen but are not in uniform,” Rukirabashaija wrote on Facebook on Tuesday. “I’ve locked myself inside.”

It is unclear why Rukirabashaija was detained, but his lawyer, Eron Kiiza, said the police crime intelligence agency was holding Rukirabashaija in Uganda’s capital, Kampala, according to BBC.

Rukirabashaija has been critical of the Musevenis and reportedly called the lieutenant general “obese” and said “the Musevenis have imposed enormous suffering on this country.”

Rukirabashaija became nationally famous for his fiction and nonfiction writing about Uganda and his literary criticisms of the nation’s government and social system. His most well-known books include “The Greedy Barbarian” and “Banana Republic: Where Writing Is Treasonous.” 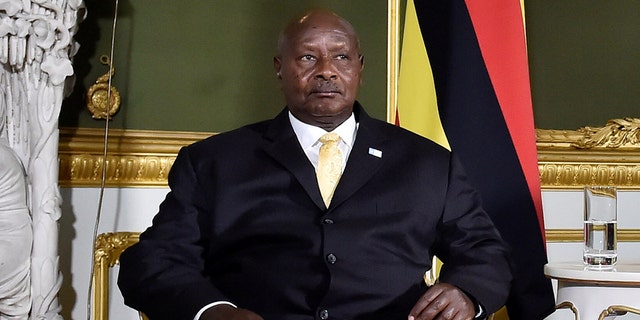 This isn’t the first time Rukirabashaija has been detained by the government in Uganda. In April 2020, he was interrogated and subject to torture while being detained for seven days over some of his fiction, The Guardian reported.

In “Banana Republic,” Rukirabashaija details how dictators in Africa “will always think that one is writing about them” when writing political fiction and think you are trying to “embarrass him.”

“In Africa, when you write fiction, especially political fiction, such as the political allegory ‘Animal Farm’ by George Orwell, the leaders will always think that one is writing about them. Of course, every dictator will suspect that the writer meant to embarrass him,” Rukirabashaija said. “Yoweri Museveni, the president of Uganda, felt that it was him that I had written about, and so he sent his hoodlums to arrest and torture me in order to hamper my creativity. The idea was to completely stop me from being creative.”

The Ugandan Forum for Democratic Change published a demand for Rukirabashaija’s release to social media Tuesday, saying, “We strongly condemn this act of injustice, the NRM regime and its deep state MUST Free the author of The Greedy Barbarian.”

Associated Press contributed to this report.