Hundreds of thousands of NHS patients face waiting weeks for life-saving scans and X-rays because of a radiology staffing crisis, medics warn

Hundreds of thousands of NHS patients face waiting weeks for crucial scans and X-rays due to a staffing crisis among radiologists, medics warned today.

Official figures from the NHS for February show 327,663 patients were waiting more than six weeks for a key diagnostic test such as an MRI scan or ultrasound.

But the Royal College of Radiologists warned the crisis could get even worse unless the staffing shortage is urgently fixed.

Experts fear the crisis may put lives at risk by delaying diagnoses for cancer or other life-threatening diseases.

The RCR’s poll of radiology bosses from 164 trusts found 58 per cent feel they do not have enough staff to keep patients safe. 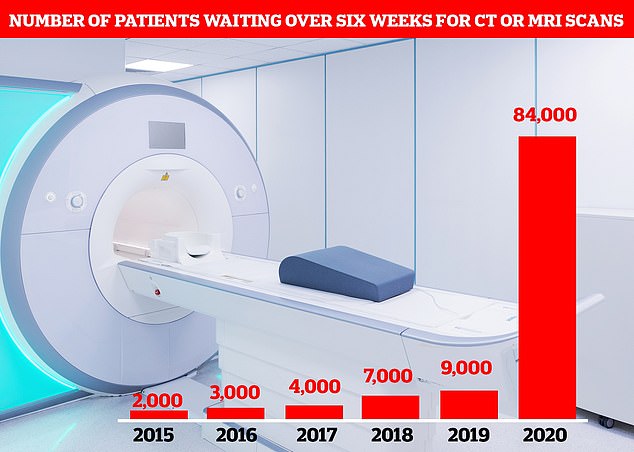 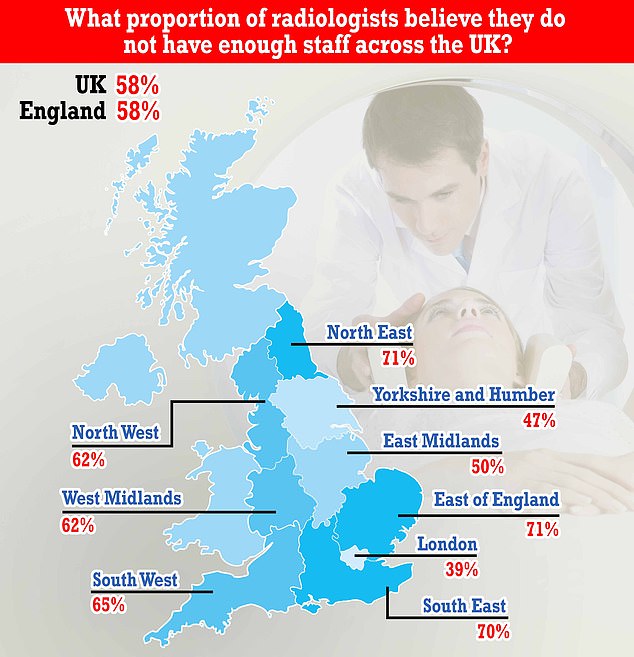 Unless more consultants are trained and there is better retention and recruitment, by 2025 the UK’s radiologist shortfall will amount to 3,613 consultants (44 per cent).

The Department of Health and Social Care have been approached for comment.

The appeal comes less than a week after NHS unions called for billions of pounds to hire more staff and stop a ‘chronic undersupply’ of health workers across the board.

In an open letter to Boris Johnson, they warned there will be a ‘haemorrhaging of doctors, nurses and other frontline health workers’ if staff rosters aren’t filled up to ease the workload.

The Prime Minister last week pledged the NHS would get ‘all the funding it needs’ to get back on track after the Covid pandemic and No10 has promised to boost doctor and nurse numbers.

Professor Mark Callaway, radiology workforce lead at the RCR, said: ‘Our new report has found the NHS needs thousands more radiologists to ensure patients get the safe and effective treatment they deserve, amplified by the first-hand experience of frontline doctors who witness the impact of consultant shortages on patient care on a daily basis.

‘The staffing forecast for 2025 makes grim reading but, even more worryingly, swathes of demoralised radiologists are imminently looking to work less or leave the NHS.’

The college said radiologists are working hard to clear the backlog of work caused by the pandemic, but are having to scan at a slower rate due to the need for enhanced infection control and social distancing.

Half of trusts and health boards (47 per cent) in the UK reported not having the staff or transfer arrangements needed to run safe 24/7 interventional radiology services, meaning patients are potentially missing out on life-saving procedures.

Some radiology bosses admitted they cannot deliver adequate services for patients and can no longer provide cancer and acute care safely.

The RCR said the UK has reached a ‘tipping point’ when it comes to staffing, with shortages posing a serious threat to NHS recovery. As a result, it said patients are facing ‘long, anxious and inevitable’ waits for diagnosis and surgery.

The RCR’s report noted that the UK has 4,277 radiology consultants, equating to 3,902 doctors working full-time, an increase of 170 full-time consultants compared with 2019.

But while consultant numbers are increasing, it is not fast enough to keep up with patient demand, and the shortfall in staffing ranges from 24 per cent to 38 per cent across the UK, it said.

Furthermore, a poll of 1,089 UK radiology consultants at the start of April found 41 per cent were ‘moderately or severely’ demoralised in their jobs post-pandemic and 48 per cent are planning to work less after the past year.

Professor Callaway said: ‘The coronavirus pandemic has bluntly contrasted the everyday heroism of NHS teams with the chronic underfunding of services, and the cracks in radiology, as elsewhere, are becoming undeniable.

‘Unless hospital imaging capacity is massively improved, the UK will continue to lag behind other countries on cancer survival rates and patients will face worse outcomes for trauma care and all kinds of conditions.

‘The need for investment is urgent.’

Breast Cancer Now said around a quarter of breast radiologists (24 per cent) are due to retire in the next five years.

Its chief executive, Baroness Delyth Morgan, said: ‘Today’s census paints a bleak picture of vast shortages in breast radiologists across the UK at a time when a fully resourced imaging and diagnostic workforce is needed more than ever.

‘The already over-stretched NHS is facing unparalleled pressures due to the pandemic, and a frightening consequence is that some women with breast cancer may not receive an early diagnosis which is critical to their chances of survival.’

Shadow health secretary Jonathan Ashworth, said: ‘Years of underfunding and cutbacks meant we entered the crisis with waiting lists growing and targets for cancer treatment missed and these have only continued to grow during the pandemic.

‘It is now crucial that there is an NHS rescue plan that includes a proper plan to recruit and train the NHS staff we need to bring down waiting lists and leave services fully staffed for the future.

‘Leaving patients in limbo waiting for tests and treatment risks their condition worsening leading to permanent disability, loss of livelihood and tragically for some loss of life.

‘Ministers must put patients first and do all they can to bring down these spiralling waiting lists.’