A few years ago, the school I attended, Knox Grammar, was discussed, at length, in the Royal Commission into Institutional Responses to Child Sexual Abuse. The head of the school had not effectively dealt with abuse; the teachers – several later convicted of crimes – had not been reported to police.

This was a shock; I had known some of those teachers. Most of all, it was confronting, asking me to re-examine my fairly happy memories of that time. I had had a good experience; I had taken away much of value, as had many of my peers. Most of my teachers had been brilliant. But what did those experiences mean, when stacked up against the horror some children faced? Did it make any sense to say both that the school had been, for some of us, a good school, and for others a hell? Or did any claim the school made to having been “a good school” simply vanish? What value should be placed on the HSC results of those years, or the enrolments, or the money the school had made? 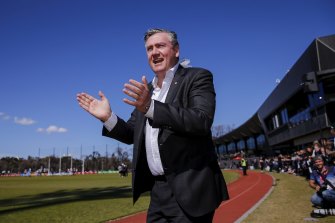 Presiding over a club found to have a problem with systemic racism didn’t stop Eddie Maguire’s tenure at Collingwood being judged as a success.Credit:Wayne Taylor

Some of you, perhaps even most of you, will have your own clear answers to those questions. I wonder, then, what your answers might be to a set of similar questions – on a very different issue – in relation to the recent controversy around Collingwood Football Club.

The situations cannot be compared directly. But as I watched the parade of public figures farewelling, with varying degrees of joy and sorrow, Eddie McGuire, I found myself considering similar questions. Again and again, McGuire’s success was mentioned, even by his detractors. He had steered the club to glory, united warring factions, moved training grounds, rebuilt the club. In various ways, he had promoted inclusion, and helped those in need. This was predictable from his allies, but it came from critics too: he had failed on systemic racism, but in most other areas he had been very effective.

I found myself wondering how these farewells might have looked had the categories been reversed. What if McGuire had been wildly impressive in stamping out racism, while the club, broke, played to tiny crowds at a rundown stadium while languishing at the bottom of the ladder? Would he have been described as a success? Of course not.

He would have been a footnote, pushed out long ago. But I am more interested in a slightly different question, which is why we find one of these ideas absurd, the other unremarkable. “McGuire stepped down from his leadership of a broke and failing club today after a hugely successful reign” – it sounds stupid. But we are broadly accepting of the idea that McGuire can reasonably be judged a success, with the caveat of the systemic racism. 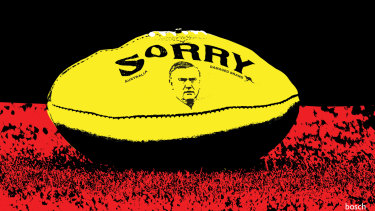 Much has been made, this last week, of McGuire’s description of the release of a damning report into racism as a “proud day”. But the more remarkable assertions were these: “There was not systemic racism as such” and “We’re not a racist club.” The report had been clear on both: Collingwood’s history of racism was “distinct and egregious”; that racism had been “systemic”.

It is not surprising that McGuire could not immediately admit this. Listening properly is an incredibly difficult thing to do. Listening involves an acceptance that somebody else’s story has validity; that the story you have been telling yourself is incomplete, or not entirely accurate. And sometimes it involves admitting to yourself that the two stories are entirely incompatible, and that you are the one who’s got it wrong.

The reason I introduced the example of my school is not because the cases are the same – let me say, again, they’re not – but because their very difference should force us to consider difficult questions: just how seriously do we take the harm that racism does? How do we weigh it against other achievements, and how should we define success?

I suspect that the reason many of us (those of us who have not experienced racism) are able to hold the two ideas in our head – that it is possible both to preside over a racist structure and to be a success – is that we have not learned to judge racism with sufficient gravity. Most of us do not understand the depth of harm it causes, the trauma that racist nicknames and taunts can leave decades later. (And here can I urge you to read the words of Heritier Lumumba on all of these matters.)

I don’t think this is a simple matter. I don’t think that a life, or a career, can often be defined by a single thing. But I also felt, last week, as though the farewells to McGuire (caveat: systemic racism) risked repeating the failures of the football club he led. Weren’t we saying, in effect, that there were two stories – one shameful, the other proud – and that we would just go on telling both of them, with no regard to the fact that they were fundamentally incompatible? Wasn’t this the very definition of failing to listen properly to what we were being told?

Coincidentally, Saturday marked the 13th anniversary of the Apology to the Stolen Generations. On Monday, it will be commemorated, in Parliament, by the Prime Minister. Perhaps then he will mention the shaming fact that, since the apology, the number of Indigenous children being removed from their families has risen – it had doubled by 2017. In too many ways, this country continues to fail its First Australians.

Of course, this is the same Prime Minister who is famous for exclaiming, “How good is Australia?” Sometimes he tells us how fair the country is, too. Of course, it’s not just him: this is a commonplace of Australian political rhetoric. But aren’t the two stories fundamentally incompatible?