Singapore: Prime Minister Scott Morrison will have to clear a COVID-19 test on arrival at Singapore’s Changi airport before a flying visit to meet counterpart Lee Hsien Loong in the city-state on Thursday.

Morrison is stopping in Singapore en route to the G7 summit in the UK where he is expected to have his first face-to-face meeting with US President Joe Biden. 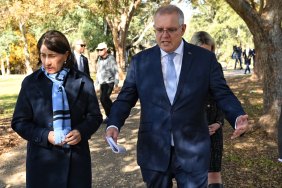 But with Singapore in partial lockdown since May 16 as a result of rising COVID cases, the restrictions in place in the island-nation have limited the size of the Australian delegation.

People are only permitted to gather in groups of two at present. That will allow Morrison to be accompanied by an adviser and then to meet Lee at the presidential palace, The Istana, but most of the Australian travelling party will remain at the airport in transit during the six-hour visit.

Discussions have taken place about what kind of COVID-19 test Morrison and a small team conducting bilateral talks will have after disembarking.

Arrivals from Australia are allowed to enter without having to undergo the 21 days’ quarantine that applies to people from most other countries flying into Singapore. But they can only enter the general community after receiving a negative result to a PCR test conducted at the airport and there has been no exemption made for Morrison. 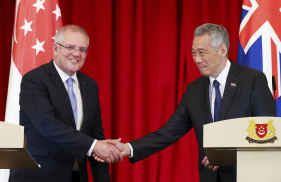 The result takes about four hours but aides have been investigating how the process can be fast-tracked and whether Morrison can instead undergo a rapid antigen test, the results of which are typically generated in 30 minutes.

While he has been vaccinated, planning has also centred on how to shield the Prime Minister and the Australian delegation from possible infection. Virus numbers have been falling – there were five new positive tests in the community on Monday – but unlinked cases in previous days have continued to be a concern here.

Lee will greet Morrison despite announcing on Sunday that he was “taking a short break” until Friday, two days before restrictions on social gatherings are due to be relaxed.

“Mostly staying home to catch up with reading, experiment with photo apps, and try home delivery meals,” he wrote on Facebook.

“Look forward to venturing out again when restrictions ease.”

Morrison’s visit carries additional significance as it is the first at leadership level to Singapore since the onset of the pandemic.

The pair held their most recent bilateral leaders meeting in March 2020 by videoconference signing a treaty of military training and announcing new agreements on digital cooperation and cyber security.

Regional issues such as the rise of China and Australia’s links with ASEAN are likely to be on the agenda this time along with possible discussion on collaborative action towards reaching lower emissions.

The resumption of international travel is expected to be another talking point but there is unlikely to be anything tangible to emerge on that front with Australia’s vaccination rate still extremely low and its doors to the world very much closed.

The superpower has been active with its face-to-face diplomacy in the region during the pandemic including multiple high level meetings at home and abroad with Australia’s nearest neighbour in south-east Asia, Indonesia. The latest was in Chongqing on Sunday between Indonesian leader Joko Widodo’s presidential envoy Luhut Binsar Pandjaitan and Chinese Foreign Minister Wang Yi.

There hasn’t been an in-person meeting between Australia and Indonesia at leader or ministerial level since Joko’s state visit to Canberra in February 2020.

“It’s good that the Prime Minister is visiting Singapore because senior Australian officials need to spend more time on the ground in south-east Asia if they are to maintain regional relationships in this time of renewed geopolitical competition,” said Ben Bland, the director of the south-east Asia program at the Lowy Institute.

“The pandemic has made travel difficult but Zoom and Webex are no substitute for face-to-face meetings in south-east Asia – a fact China has acknowledged through its intensive in-person diplomacy with the region during the last year.”