TED Cruz posted a video showing the "inhumane" conditions inside what he calls the "Biden cages," showing children on the ground with mylar blankets crammed inside pods 15 times their capacity.

"These are the Biden cages. (Faces blurred.) Thousands of kids, in the midst of a pandemic, crammed in at 1500% capacity," Cruz tweeted. "This is just one of the “pods” at Donna. There are SEVEN more, equally full." 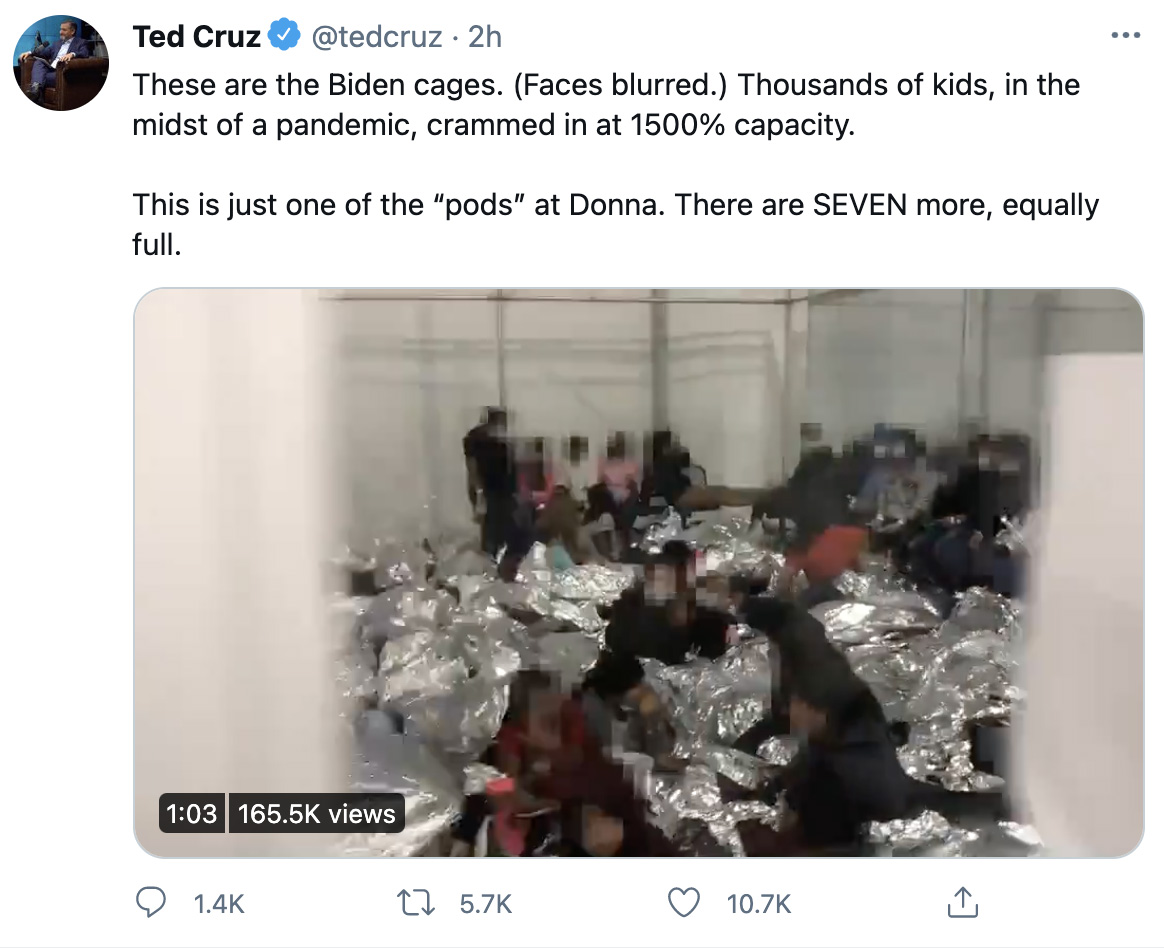 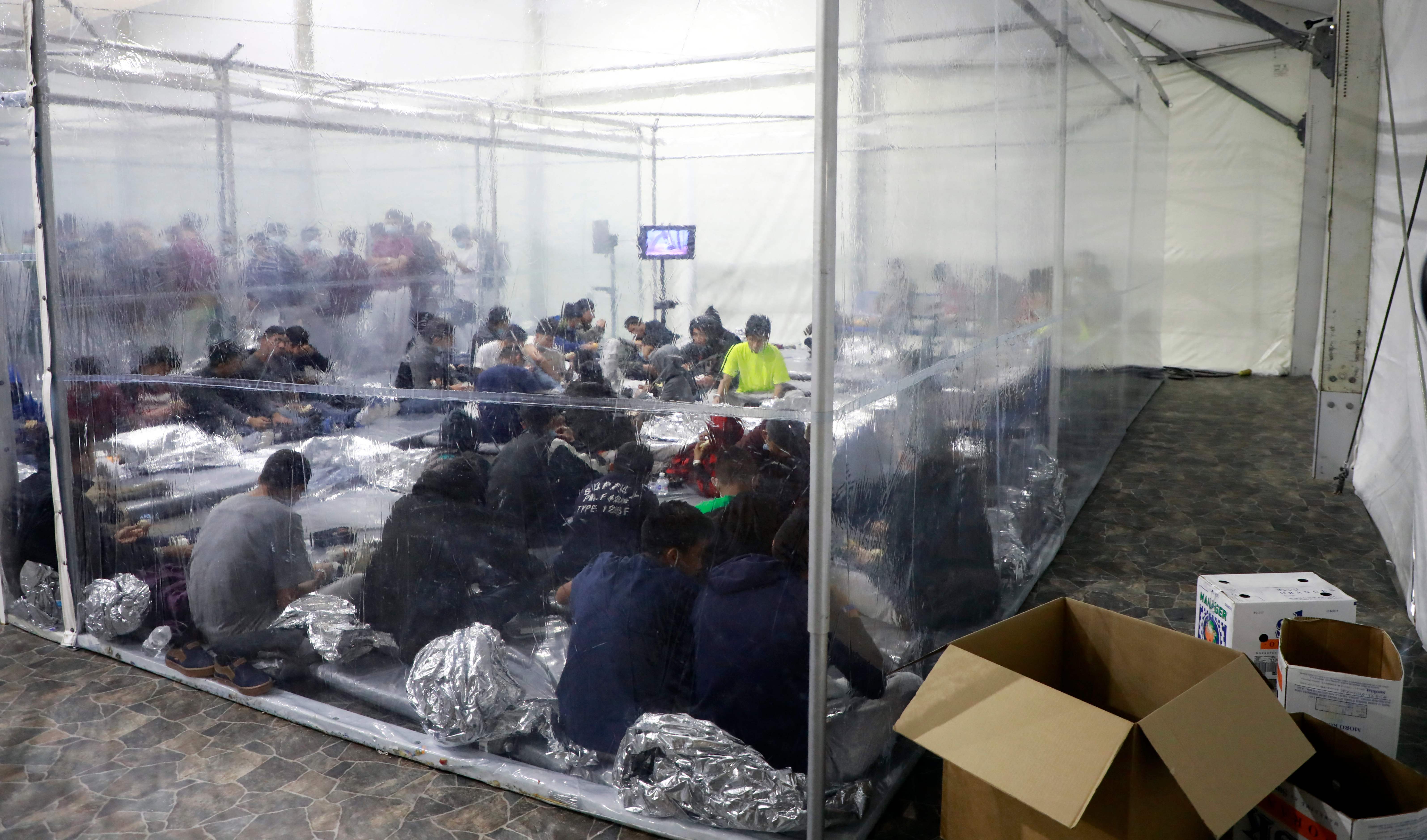 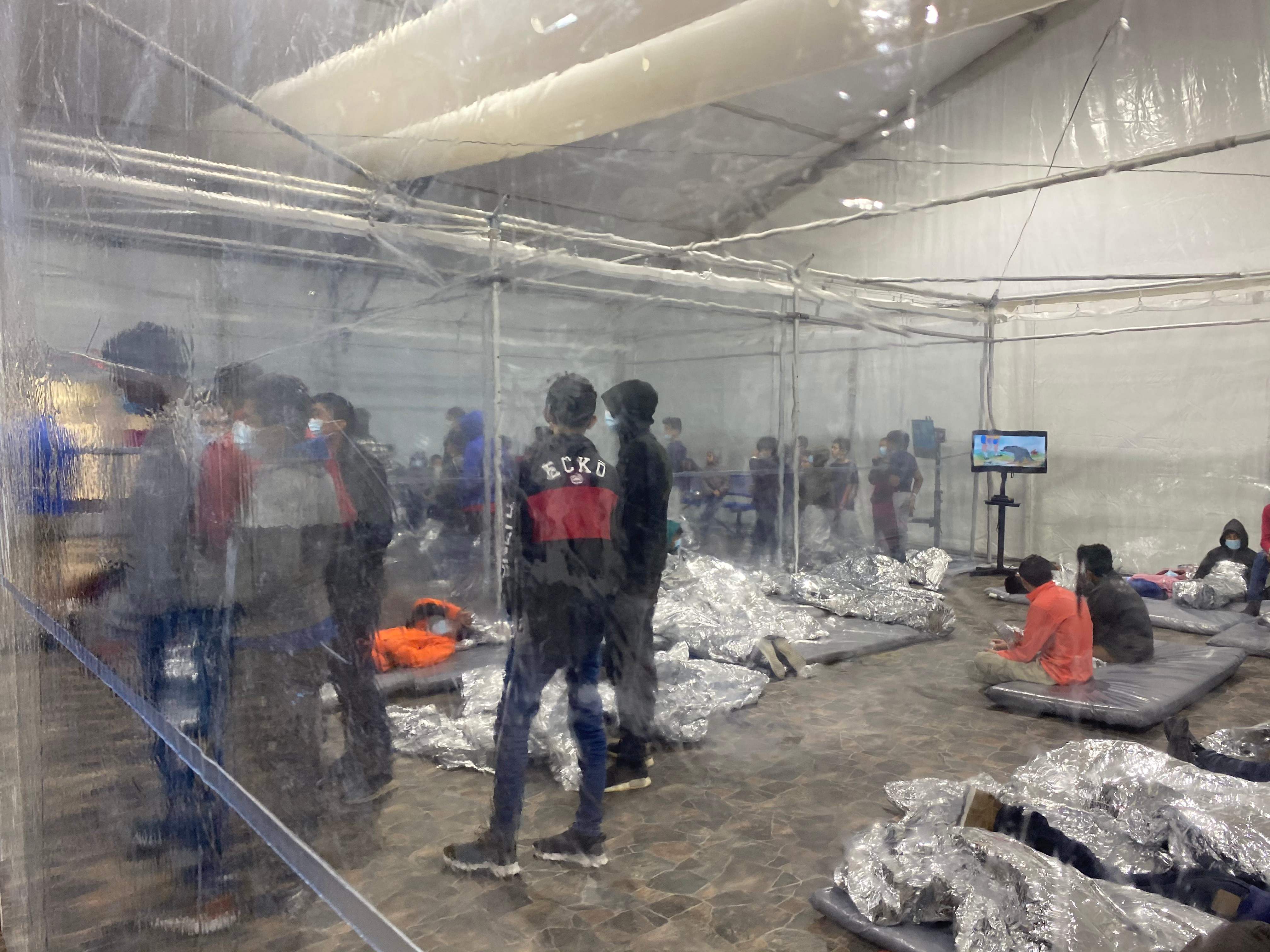 The Texas senator earlier in the day led a group of 18 Republican senators on a trip to the US-Mexico border, where he claimed to have seen cartel members and human traffickers "taunting" Border Patrol agents.

The video he posted on Twitter shows thousands of children sitting on the floor of a tented building huddling under mylar blankets as the camera spans past rooms labeled by numbers.

Sharing footage from his late night excursion through the border, Democrats have blasted his move as a "desperate … political stunt."

Cruz was similarly lashed out on by social media users, who asked what he thought of migrant children under the Trump administration. 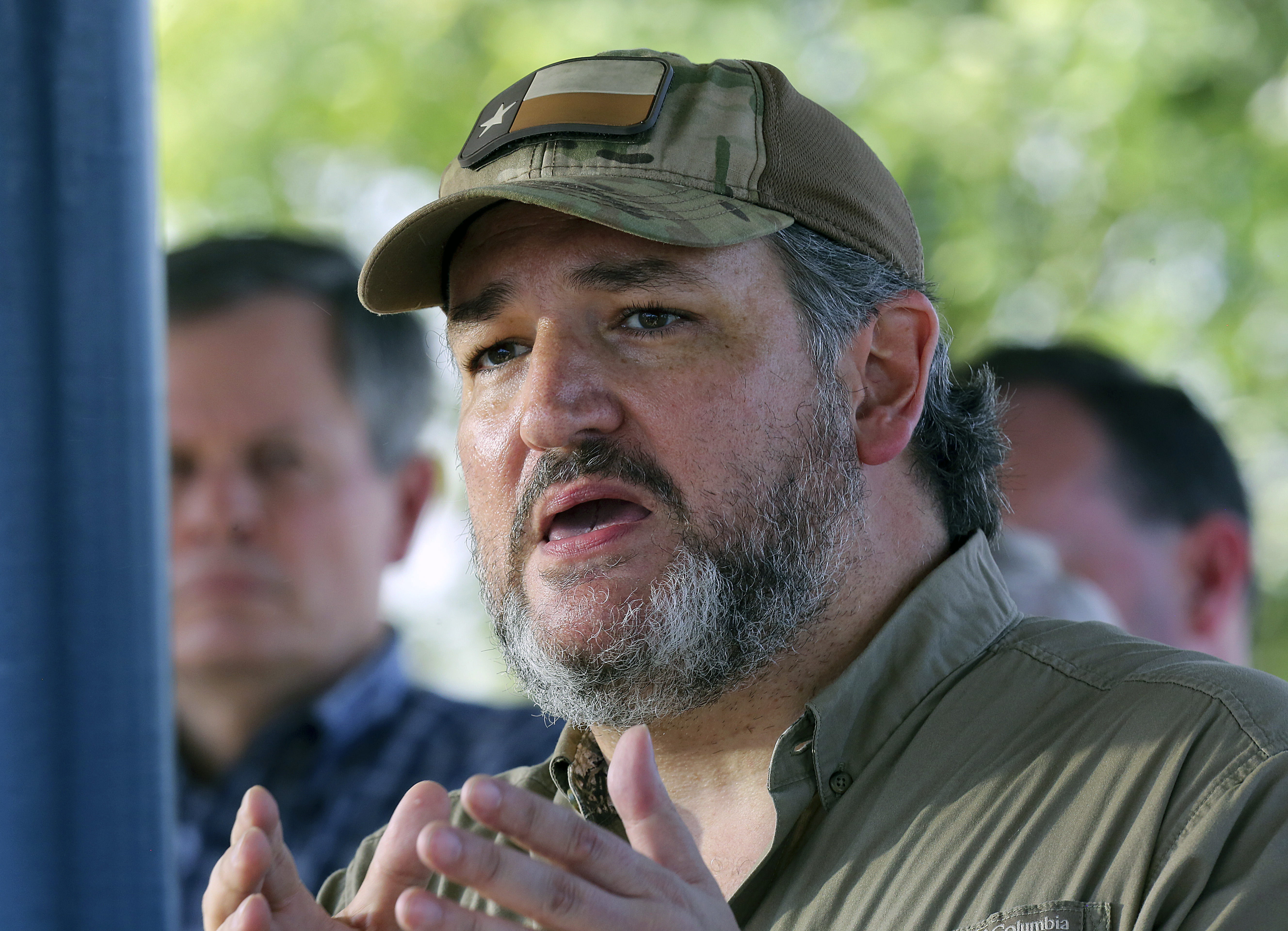 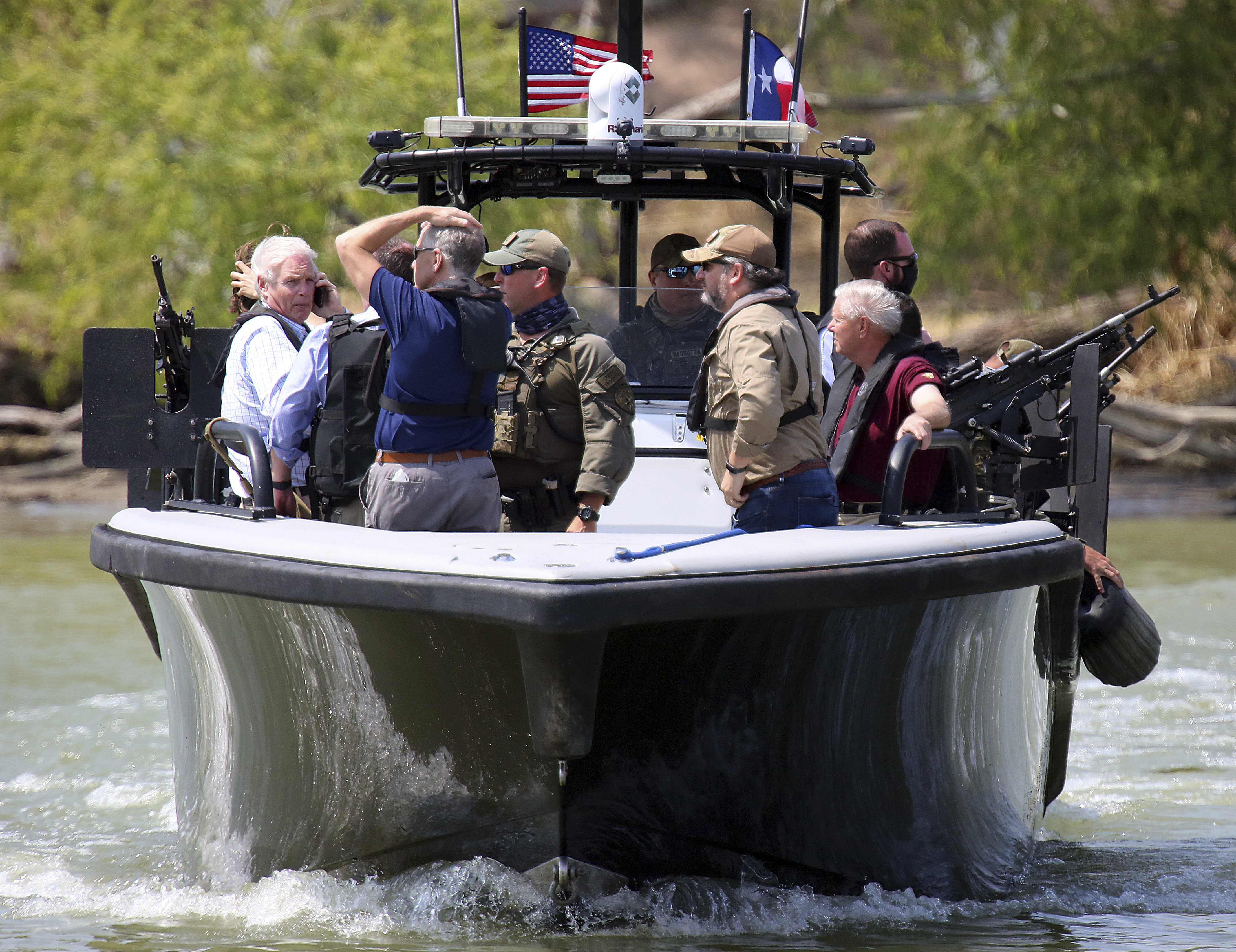 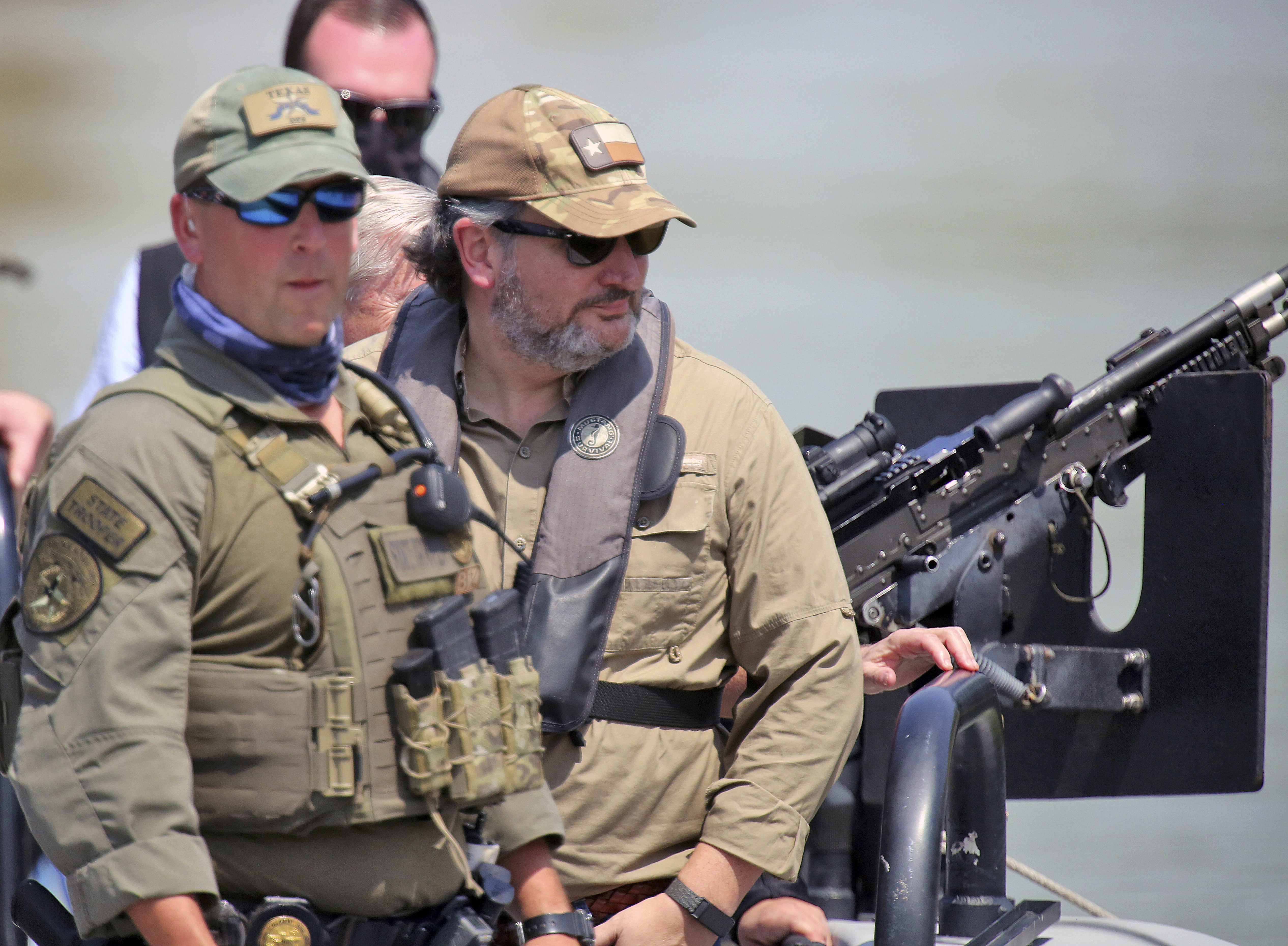 "Where were you when Comrade Trump created this situation?" one user wrote.

"Ted Cruz acts like this problem just started on Jan 20. Where was all of this outrage from him before Jan 20?" wrote another.

"Where were you on this during the Trump administration, when families were being torn apart, some permanently?" asked another.

Cruz, along with 18 other Republicans, headed to Rio Grande to visit overcrowded Customs and Border Patrol (CBP) facilities holding thousands of migrant teens.

The group say they're seeking to shed light on what they call President Joe Biden's mounting "crisis" at the border amid record high numbers of asylum seekers flooding to the US.

CBP facilities are currently at capacity under coronavirus protocol, and the Rio Grande Valley sector has even far exceeded its non-pandemic limits.

In his video captured from the bank of the Rio Grande River, Cruz claimed to be watching human traffickers as they attempted to smuggle migrants across the water into the US.

"That's Mexico right over there, and you can see there are three smugglers right there," Cruz says in clip, "standing on the Mexico side looking at us."

Those smugglers, Cruz claimed, were taunting the senators in addition to nearby CBP agents.

While the image is hard to make out, voices are heard calling out in the background of the footage. A few flashes of light are also visible, which Cruz claims is the smugglers' flashlights. 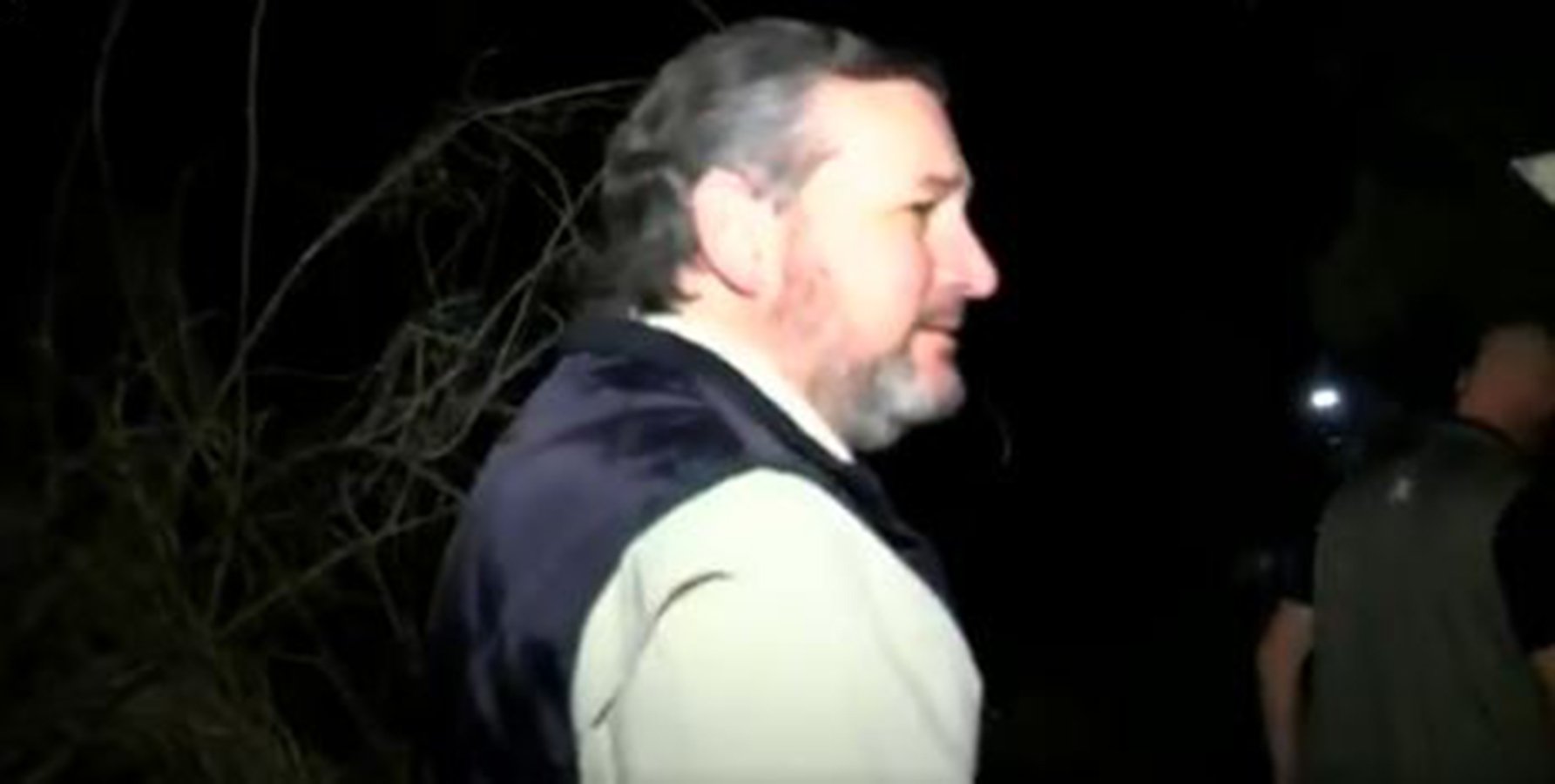 In a second clip, Cruz offered a more detailed account of what he and his cohort of fellow Republicans allegedly witnessed.

"So it's past midnight and I'm standing on the shore of the Rio Grande, the water is right behind me down. I'm down on the Texas border along with 18 senators, we made the trip to see the crisis that is playing out," he begins.

Cruz blasted Biden's reversal of several strict Trump-era immigration policies as being the cause of the surge.

Dogs are heard barking in the background as the senator speaks.

"This is a humanitarian crisis," Cruz continues in the footage. "It's a public health crisis. The illegal immigrants who are being released, they're testing positive for COVID-19 at a seven times higher rate than the American population."

He continues: "And it's a national security crisis. And it's time for the Biden administration to put an end to it. And stop sanctioning lawless chaos on our southern border." 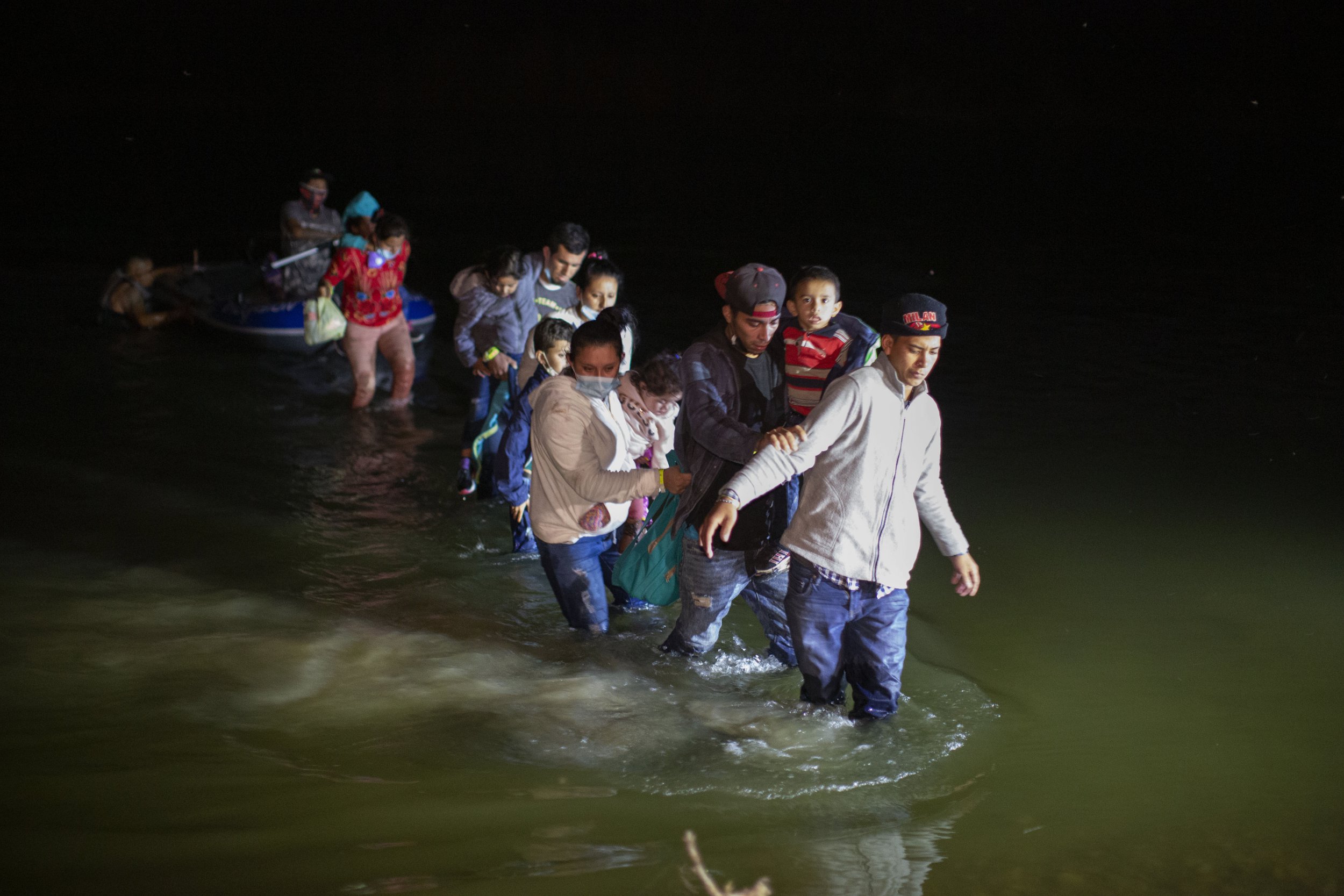 In a tweet chain, Collins wrote: "Mexican cartels control who crosses the border. A young mother from Guatemala, sitting on an aluminum blanket with her 1-year-old, told me she paid smugglers $6,000."

Democratic Rep. Joaquin Castro of Texas is leading a group of House Democrats on a separate trip in the same region.

In a follow up tweet, O'Rourke wrote: "You’re in a Border Patrol boat armed with machine guns. The only threat you face is unarmed children and families who are seeking asylum (as well as the occasional heckler).

"If you’re looking for a crisis to cosplay Senator for, I’m happy to point you in the right direction," he added before highlighting a rise in mass shootings in Texas.

In a Friday statement, the Democratic National Committee also blasted Cruz, calling his border trip nothing more than a "desperate" political stunt.

"In a desperate attempt to mislead the country, world-renowned political clown Ted Cruz and his hapless sidekick John Cornyn are bringing their show on the road with their latest political stunt," the DNC's Eduardo Silva wrote.

"If there's one thing Ted Cruz knows how to do, it is to disingenuously grandstand for TV cameras. President Biden took more action to address immigration issues in one day than Senate Republicans have in the last four years."

Silva continued: "If Senator Cruz and his colleagues were serious, they'd be in Washington working with President Biden to be a part of the solution." 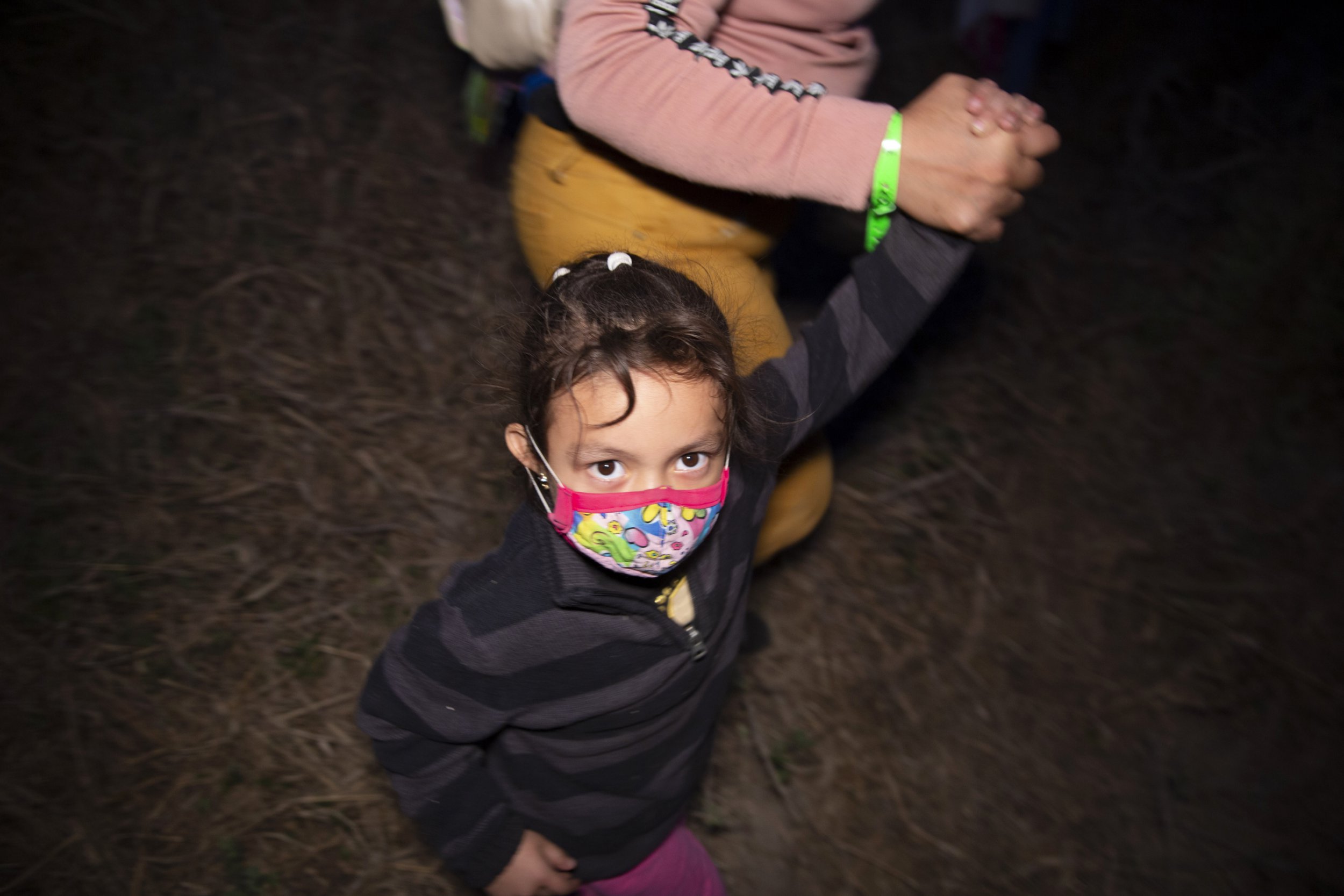 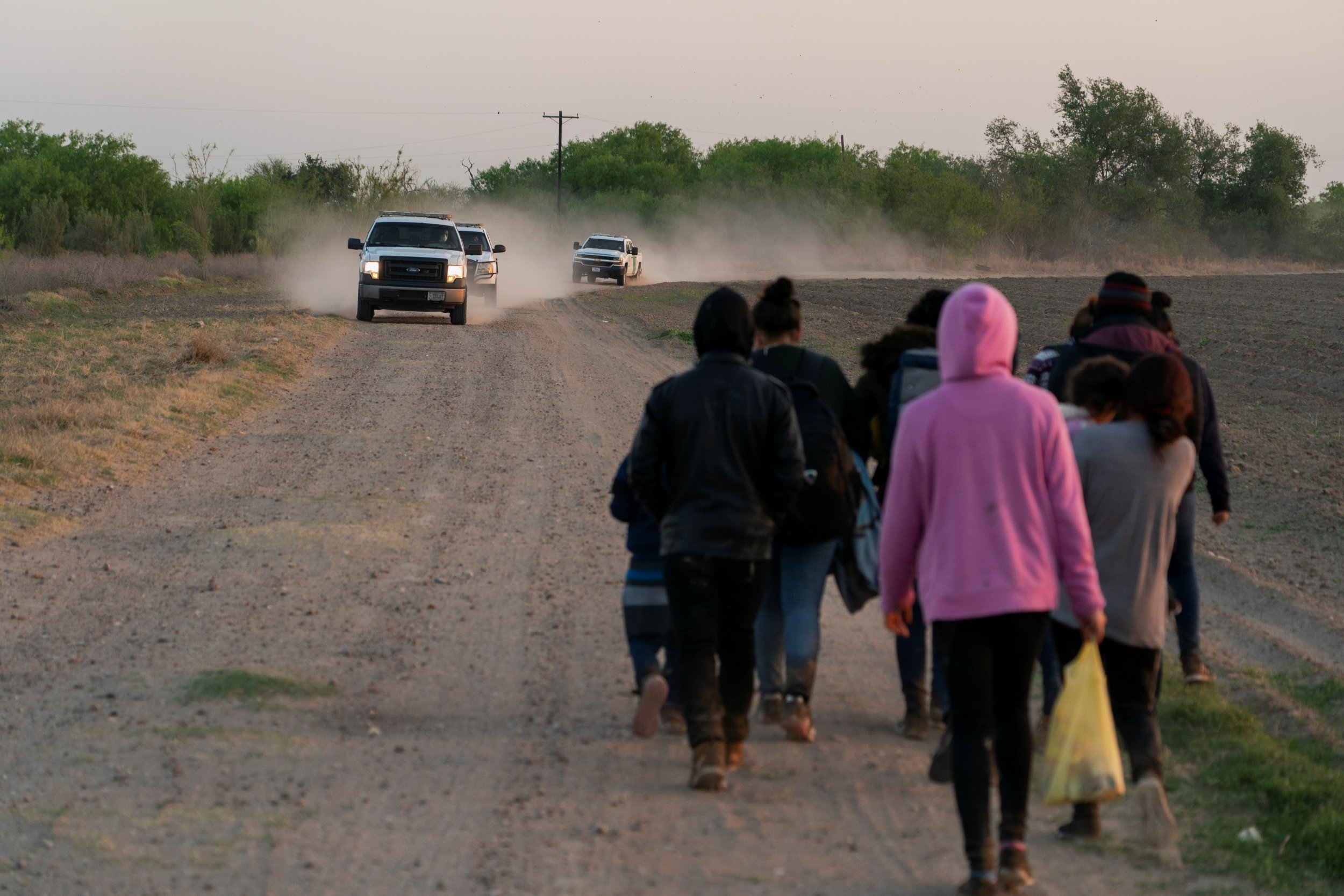 Later Friday, Cruz and his group will be touring a migrant facility in Donna, where, earlier this week, leaked images showed hundreds of migrant children penned in shoulder-to-shoulder.

Rep. Henry Cuellar, who first revealed the images, described the conditions inside as "terrible", adding the camp was ill-equipped to properly look after children.

Reports that have emerged in the days since described children being deprived of showers and fresh air for days on end, and prohibited from contacting family members who may be concerned about where they are.

Under mounting scrutiny, CBP released images of their own from the facility to "balance the need for public transparency and accountability."

More than 16,500 unaccompanied migrant children were in federal custody as of early Wednesday, according to CBS News.

More than 11,500 of those children were being housed in shelters and emergency housing sites, while another 5,000 were stranded in overcrowded Border Patrol facilities.

Under CBP protocol, the children are only meant to be held by CBP for a maximum of three days before being transferred to facilities run by the Department of Human Health and Services, which are better equipped.

However, the overcrowded conditions in CBP holding tents have caused significant delays, with hundreds of children being held in temporary facilities for 10 days or more. 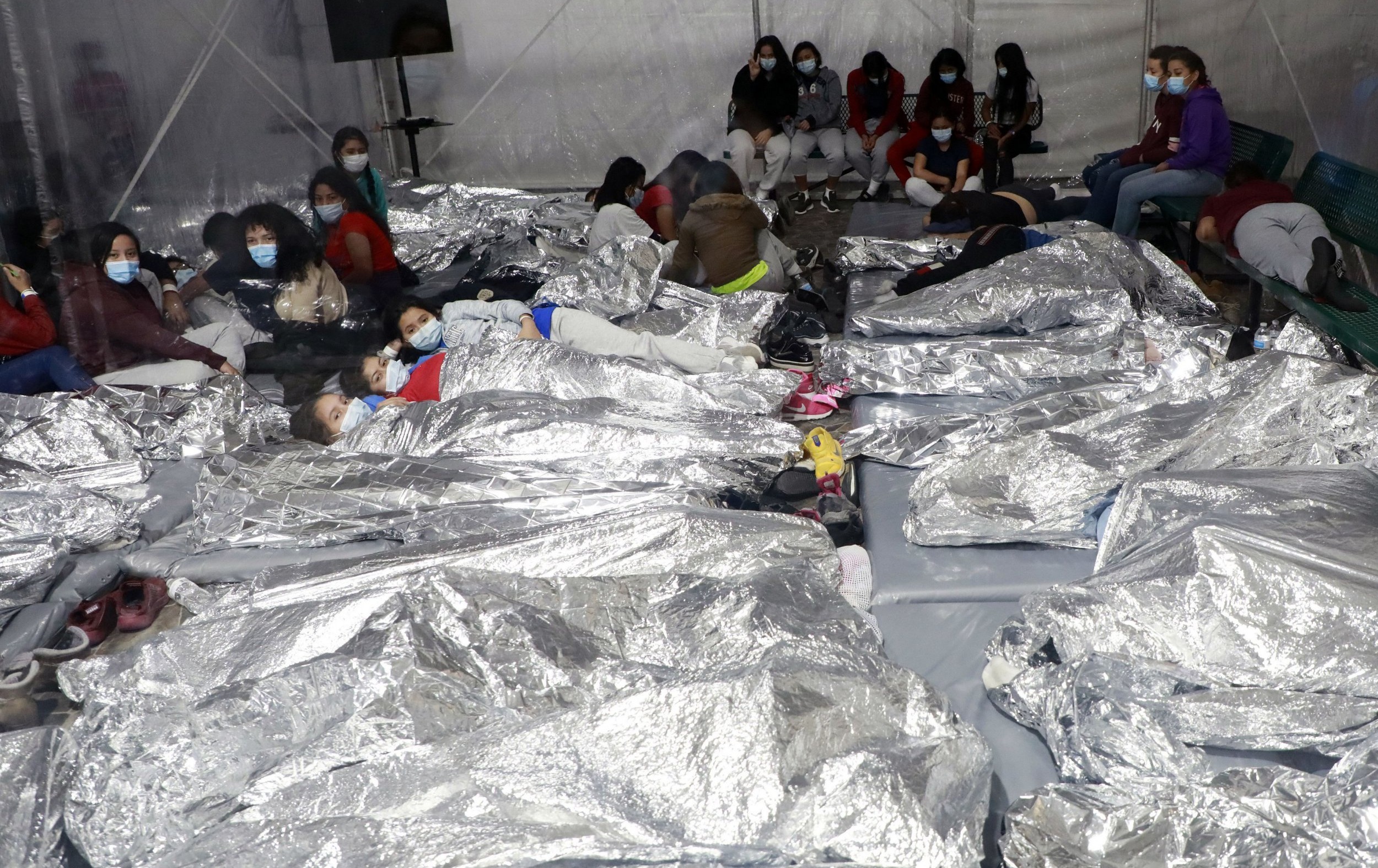 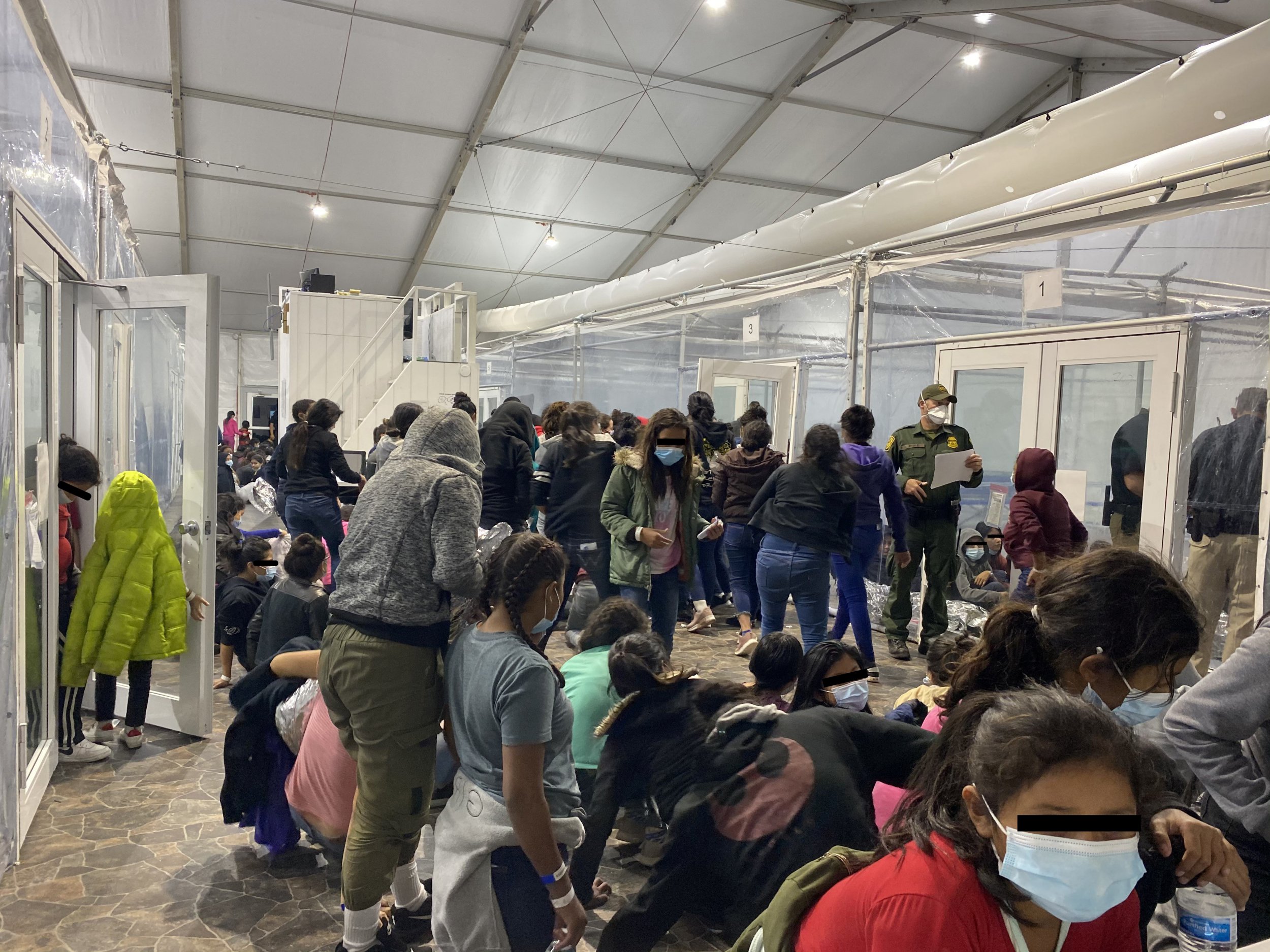 In his first press conference since being sworn in as president, Joe Biden said on Thursday that the conditions inside migrants camps were "unacceptable".

"That's why we're going to be moving a thousand of those kids out quickly," he said.

"That's why I've been working from the moment this started to happen to try and find additional access for children to be able to safely – not just children but particularly children – to be safely housed while we follow through on the rest of what's happening."

Biden also said he "should be flattered" if immigrants were heading to the border because he's "a good guy", as has been claimed.

"Does anyone suggest there was a 30 percent increase [with] Trump because he was a nice guy?," he continued, adding that the recent surge in migrant arrivals is because its the safest time of year for them to travel.

"They're coming because the circumstances in [their] country," he said. "It's because of what's happened every year… Take a look… The vast majority – the overwhelming majority – are being sent back.

"Tens of thousands of people who are over 18 years of age and single, one at a time, coming have been sent back." 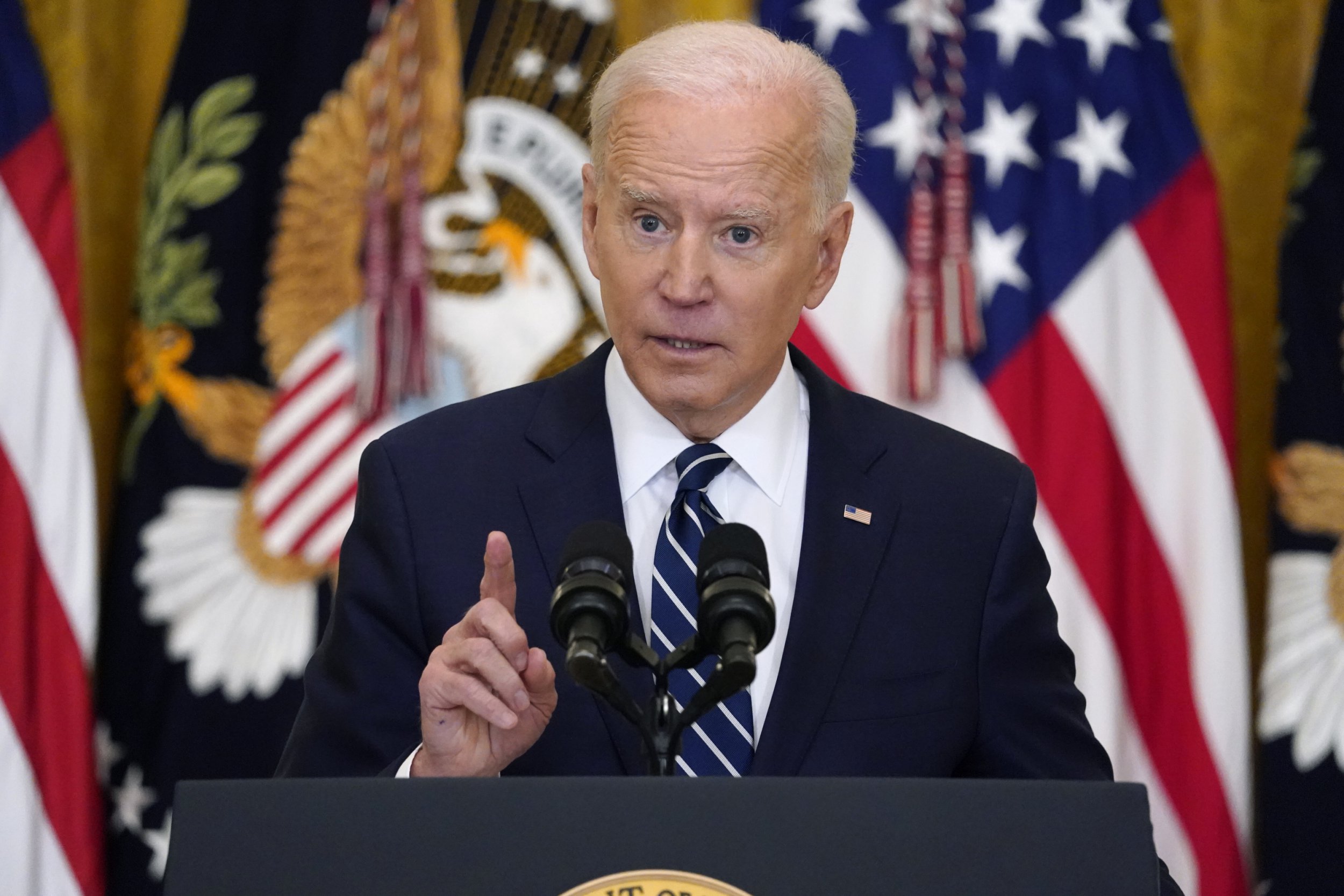 According to the latest available data, CPB agents captured 100,441 migrants as they illegally attempted to cross over into the US – a 28 percent increase on the month prior.

Most were single adult migrants who were expelled under a Trump-era public health order enacted at the beginning of the pandemic, officials said.

Currently registering an average of 530 encounters per day this month, border officials are on track to take in 16,000 unaccompanied children in March – an all-time record high.

On Thursday, CBP revealed a nine-year-old child died while trying to cross the Rio Grande. A woman and three-year-old girl who were with her were able to be revived, officials said.