Heavy localised hail turned streets white in parts of Melbourne’s north and severe flash-flooding hit Traralgon after a night of wild weather that battered Victoria and NSW on Thursday night.

The Victorian State Emergency Service’s Melton unit said three of its crews were responding to calls for help close to midnight on Thursday evening, mostly for flooding from the hail, which caused blocked house and street gutters.

SES photos shared on facebook show streets at Hillside, Fraser Rise and other surrounding areas coated in a white layer of hail, with some families revelling in the spectacle, building small snowmen on the roads.

At Traralgon in the Latrobe Valley, SES crews fielded 63 requests for assistance between 5pm on Thursday evening and about 6am on Friday.

A spokesman for the service said 95 per cent of the requests were related to flooding, with one person needing to be rescued after they became trapped in a vehicle in floodwater, and another calling after their house was struck by lightning. There were holes in their roof as a result, and the power went out. 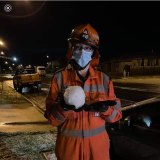 The service received a total 140 requests for assistance across the state between about 5pm on Thursday and 6am on Friday. Of those, 82 were flood-related, 25 were for building damage, and others were for various reasons like trees coming down.

Between 15 and 25 millimetres of rain was forecast for Melbourne on Friday, with a 70 per cent chance of showers in the afternoon increasing to nearly 100 per cent by the evening.

While Sydney was hit by damaging storms producing hail and flash flooding in the afternoon with the city’s west was the hardest hit.

Footage posted to social media showed shoppers scattering after a ceiling inside Mt Druitt’s Westfield shopping centre collapsed under the weight of the rain and hail.

Fire and Recuse NSW said three vehicles were trapped by flood waters in Merrylands, another suburb in Sydney’s west. The NSW State Emergency Service said it had received more than 200 calls for assistance by 7pm.

A 4pm tornado warning was issued for western Sydney, but later cancelled.