U.S. officials are aware of about 100 American citizens and legal permanent residents who are still stuck in Afghanistan and are ready to leave the country almost a month after the last U.S. troops left.

‘The highest priority remains helping the U.S. citizens who wish to leave the country now to do so,’ the official told reporters.

The Biden administration has faced intense criticism for the way it pulled out troops from Afghanistan, triggering a chaotic evacuation of civilians.

Veteran-led groups trying to rescue Americans and Afghan allies question the State Department figures and say they believe many more than 100 U.S. citizens have been left behind.

Jean Marie Thrower, of the Afghan Rescue Crew, told DailyMail.com that the true number of stranded Americans was 400 to 500.

Many don’t want to leave because they aren’t allowed to take Afghan relatives or the orphaned Afghan children they’ve adopted with them, she added.

‘We can take them to a refugee camp and have them vetted but they shouldn’t be left behind,’ she said.

She accused the Biden administration of dragging its feet, leaving it to volunteers to help Americans escape.

‘They’ve thrown these people into a cage with a lion and shut the door,’ she said. 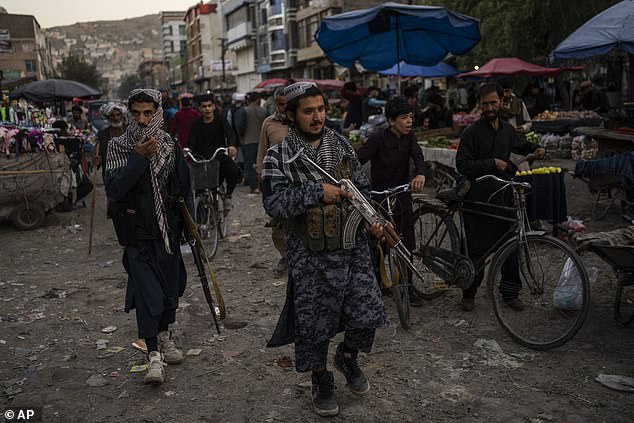 Taliban fighters patrol a market in Kabul even as officials say 100 American citizens and U.S. legal permanent representatives remain in the city and are ready to leave 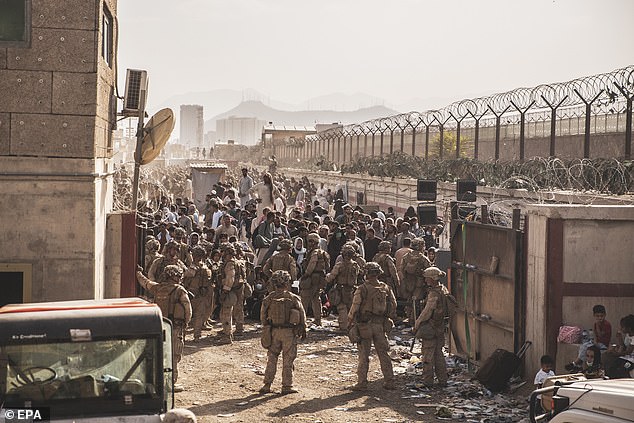 About 124,000 people were flown out of Kabul airport during a hurried evacuation that ended just before the final U.S. troops departed during the night of August 30 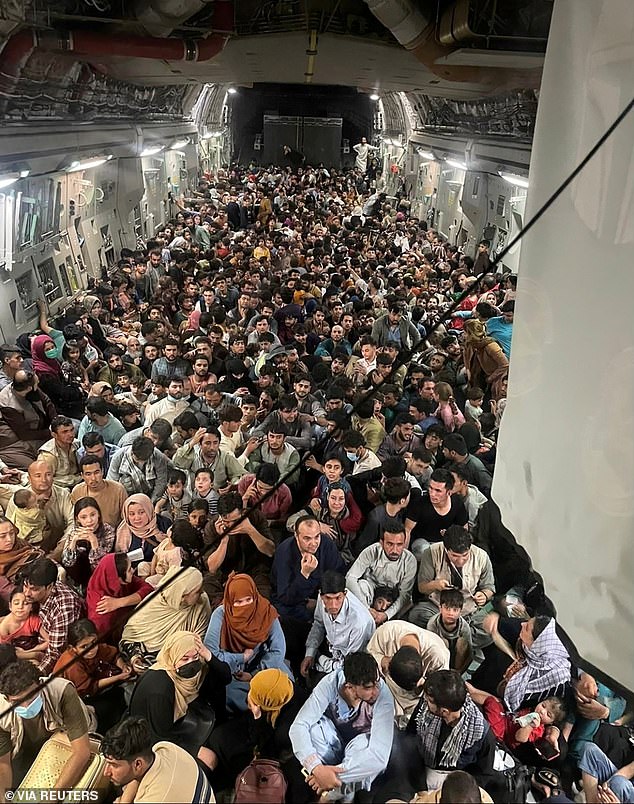 For two weeks, extraordinary images of the Kabul airlift dominated the media, until it all came to a halt leaving behind thousands of Afghans who had worked with the U.S. military 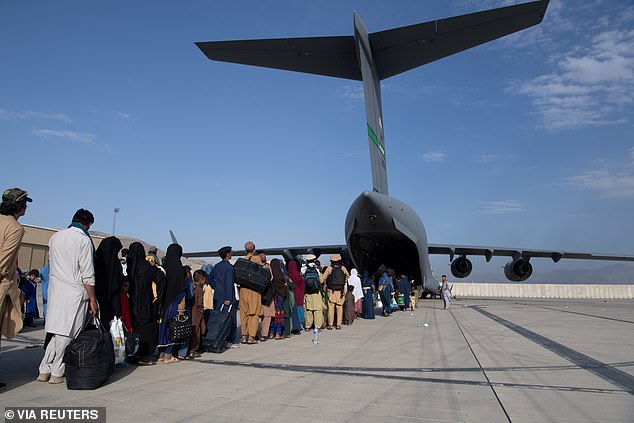 The evacuation flights have ended but U.S. officials say they are working to persuade the Taliban to allow the free movement of Afghans and foreign nationals who want to leave 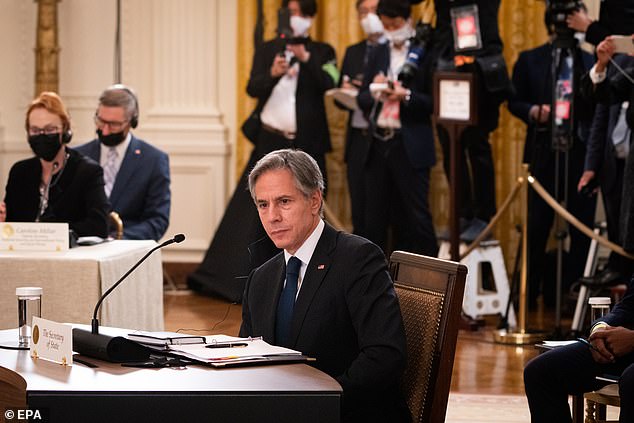 About 124,000 people were airlifted out of Kabul before the last U.S. troops left on August 30.

However, officials struggled to provide an estimate of how many Americans and how many residents had been unable to leave.

At least 85 American citizens and 79 lawful permanent residents have made it out since then, said the official in a briefing call with journalists.

But others did not want to leave because family members lacked documents needed to enter the U.S., the official added.

Two weeks ago, Secretary of State Antony Blinken told lawmakers that about 100 U.S. citizens were still seeking evacuation from Afghanistan.

The number has gone up and down, complicated by the fact that some do not want to leave without relatives.

But veteran-led rescue efforts have said they believe the counts underestimate the true number as many citizens and green card holders did not register with the U.S. embassy when they travelled to Afghanistan.

The latest announcement suggests there has been slow progress in bringing home the remainder but the official said the State Department continued to try to persuade the Taliban to reopen Kabul airport to commercial traffic.

‘In all of our interactions and communications with the Taliban, whether its directly or indirectly, we continue to stress one of our top priorities… is freedom of movement and safe passage for our citizens, our legal residents, and for a range of Afghans,’ said the official.

The mammoth evacuation of some 124,000 people included 5,500 American citizens after the sudden collapse of the country on August 14 in the face of a Taliban onslaught.

The crush to escape through the Kabul airport turned deadly on August 26, when a suicide bombing outside its gates killed 13 US servicemembers and  169 Afghan civilians.

When the evacuation ended on August 30, it left behind hundreds of Americans and thousands more Afghans who worked for the U.S. military or coalition partners remain in the country, even as horror stories spread about Taliban brutality. 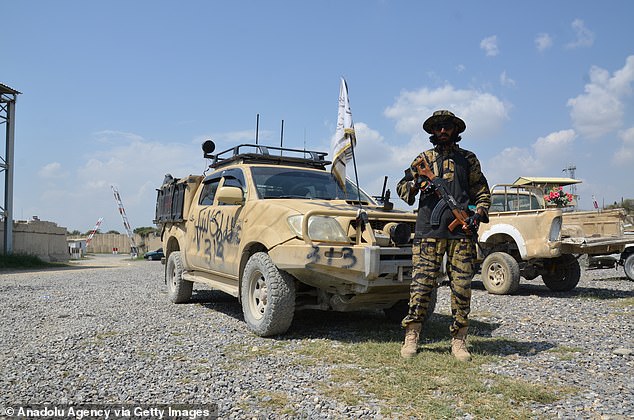 Last week eyewitnesses described how Taliban gunmen hanged the dead bodies of alleged kidnappers in four squares across the Afghan city of Herat after killing them during a shootout.

Wazir Ahmad Seddiqi, who runs a pharmacy beside the main square in Herat, said four dead bodies were brought to the square and were hanged from a crane.

He said three bodies were moved to other squares in the city in western Afghanistan to be displayed, in a gruesome move that signalled a return to some of the Taliban’s past methods.

Mullah Nooruddin Turabi, one of the founders of the Taliban and the chief enforcer of its harsh interpretation of Islamic law when they last ruled Afghanistan, said the regime will bring back executions and amputations for thieves – though they may not be held in public.

He told The Associated Press in Kabul: ‘Everyone criticised us for the punishments in the stadium, but we have never said anything about their laws and their punishments.

‘No one will tell us what our laws should be. We will follow Islam and we will make our laws on the Quran.’

The Taliban have ordered barbers around the country to ‘stop following American styles’ and has warned of punishment for beard cutting.

‘No one has a right to complain,’ said a notice posted in Helmand province, warning that shaving was not tolerated by Islamic law.