Staffordshire Uni lecturer is probed over ‘transphobic’ Twitter posts after anonymous complaint… but has NO IDEA what caused offence: Professor is now THIRD academic targeted by cancel culture mob in three months 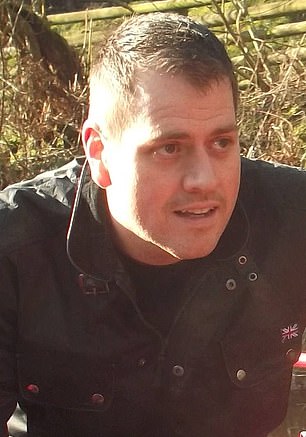 A university academic has been told he is being investigated for alleged transphobia – but has no idea what he is supposed to have said that has caused offence.

Criminologist Professor James Treadwell was informed by his employer Staffordshire University yesterday that official complaints have been made about comments he has made on Twitter.

The distressed lecturer spoke out on Twitter on Wednesday, revealing he was ‘angry and upset’ but has ‘no details of what is alleged’.

He jokingly added that it was a ‘good job cancel culture is just a myth’.

The academic stressed he believes that transgender people ‘like all people deserve dignity and respect’, but added that ‘academics giving their personal views do too’.

Professor Treadwell, who has worked at the university since 2017, said he had also been complained about for ‘denying the reality of Satanic ritual abuse’ – a reference to tweets of his last summer in which he disputed the unsubstantiated phenomenon.

Speaking exclusively to MailOnline, Professor Treadwell repeated that he does not know why he is being investigated, but believes his university are obligated to do so after receiving a complaint.

He added: ‘In the world today it would be nice if people could walk a mile in other people’s shoes a little bit more.

‘The last couple of years have been hard on everybody. You can cause offence when none is intended. I haven’t really got more any more to say.’

A university spokesman confirmed to MailOnline that an investigation is underway and said they are committed to ‘equality, diversity and inclusion’.

They added they are ‘equally’ committed to academic freedom.

The investigation comes after other academics have been targeted in recent months for alleged transphobia.

In October, Sussex University feminist philosopher Professor Kathleen Stock quit her job following a ‘bullying and harassment’ campaign carried out by students accusing her of transphobia.

Just days later, Open University academic Professor Jo Phoenix, who is also a criminologist, described how she was compared to a ‘racist uncle at a Christmas dinner table’ after she aired views about the silencing of academic debate on transgender issues.

The instances came amid repeated attacks on free speech which have targeted anyone appearing to question the notion that gender is more important than sex.

Harry Potter author JK Rowling has been slammed by trans activists for writing a blog and tweeting about the subject, including one in which she took aim at the use of the term ‘people who menstruate’ in place of the word ‘women’. 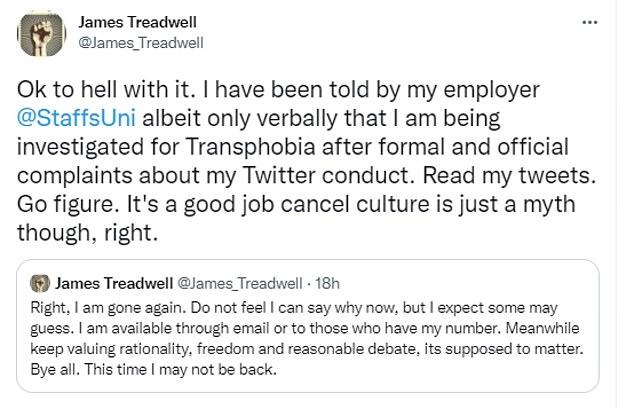 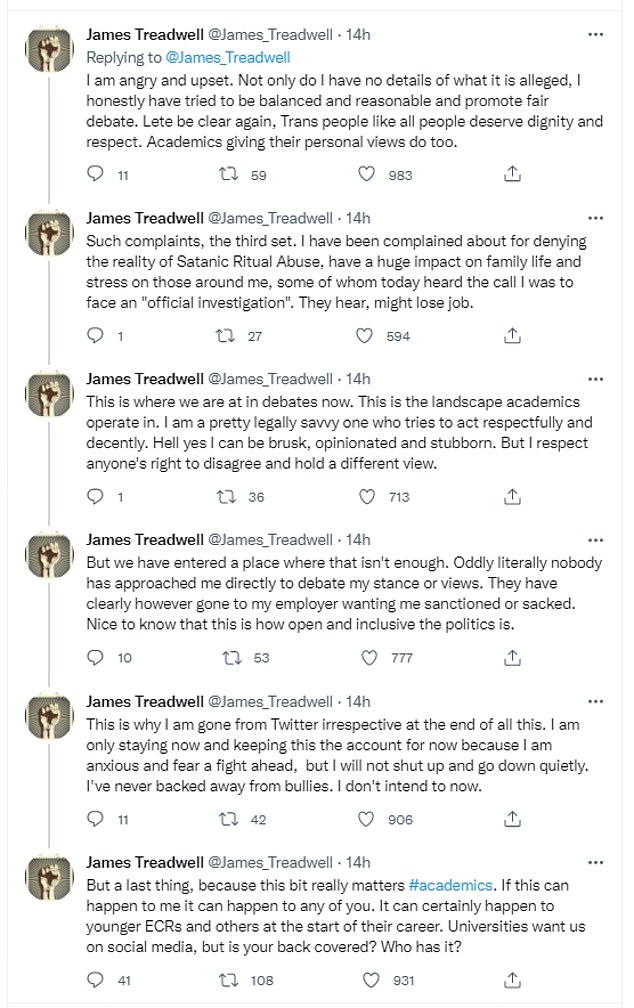 Professor Treadwell said in a series of tweets yesterday that he was told by his employer Staffordshire University that he is being investigated for alleged transphobia – but has no idea what the complaint refers to. The distressed lecturer said he was ‘angry and upset’ but has ‘no details of what is alleged’

Professor Treadwell spoke out online yesterday evening about the probe being carried out by Staffordshire University.

He wrote in a Twitter thread: ‘Ok to hell with it. I have been told by my employer @StaffsUni albeit only verbally that I am being investigated for Transphobia after formal and official complaints about my Twitter conduct.

‘I am angry and upset. Not only do I have no details of what it is alleged, I honestly have tried to be balanced and reasonable and promote fair debate.

‘Lete [sic] be clear again, Trans people like all people deserve dignity and respect. Academics giving their personal views do too.’

He added: This is where we are at in debates now. This is the landscape academics operate in. I am a pretty legally savvy one who tries to act respectfully and decently.

‘Hell yes I can be brusk, opinionated and stubborn. But I respect anyone’s right to disagree and hold a different view.

‘But we have entered a place where that isn’t enough. Oddly literally nobody has approached me directly to debate my stance or views.

‘They have clearly however gone to my employer wanting me sanctioned or sacked. Nice to know that this is how open and inclusive the politics is.’

Speaking to MailOnline after the tweets emerged, Professor Treadwell said: ‘I’ve got to be very careful. 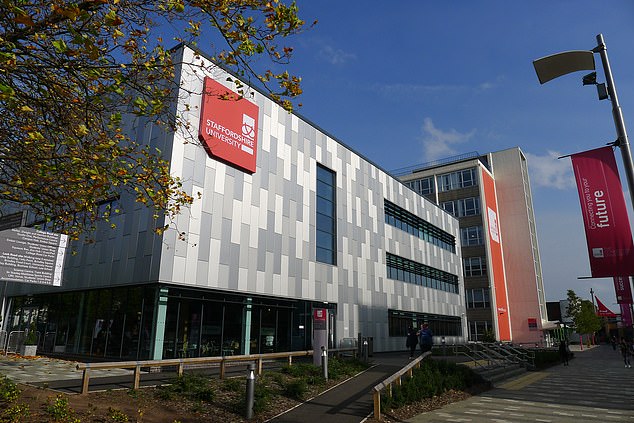 Speaking exclusively to MailOnline, Professor Treadwell repeated that he does not know why he is being investigated, but believes his university are obligated to do so after receiving a complaint

‘I don’t know the nature of what is happening. I have a feeling that potentially that they are obligated to investigate.’

‘I know it is around alleged transphobia on twitter.’

Earlier this month, Professor Treadwell was accused of ‘trying to link’ reform to the Gender Recognition Act – which allows people with gender dysphoria to change their legal gender – with ‘sex criminals’ after he penned a lengthy thread about sex offenders which made no reference to transgender people.

The Twitter critic said: ‘Is this you trying to link GRA reform with sex criminals again? Have you still not even bothered to read what it is?’ 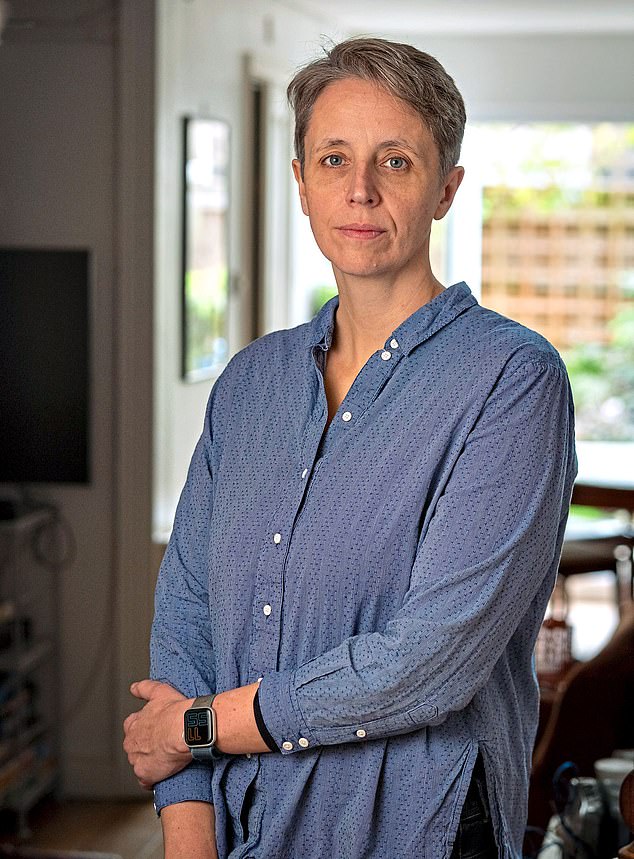 The investigation comes after other academics have been targeted in recent months for alleged transphobia. In October, Sussex University feminist philosopher Professor Kathleen Stock (pictured) quit her job following a ‘bullying and harassment’ campaign carried out by students accusing her of transphobia

Professor Treadwell replied: ‘Wow, a thread about sex offenders and you jump in with Trans issues again…

‘Like I say, sex offenders, highly manipulative men and women who will exploit any vulnerability. Odd then you quickly read this as gender recognition reform though.’

What are ‘gender-critical’ beliefs?

Gender-critical beliefs refers to the view that someone’s sex – whether they are male or female – is biological and cannot be changed.

Feminists and others who hold such views have been targeted for questioning the mantra that ‘trans women are women’ or ‘trans men are men’, even during discussions about the need to preserve safe spaces for biological women.

Professor Treadwell said on Twitter in 2018 that he does not believe transgender women should be housed in women’s prisons after inmate Karen White had been charged with four counts of sexual assault while imprisoned at Wakefield with biologically female inmates.

White, who was born a man, had been placed in women’s prison HMP New Hall after telling authorities of his identification as a woman. She was later jailed for life.

Last year, the Government’s policy to house transgender women in female prisons was ruled lawful by the High Court.

Professor Treadwell wrote: ‘I would put into male estate, because small number really do present a risk in womens estate.

‘When put in mens estate, (as I have seen) it is not the end of problem, but most mens #prisons work hard to deal with any vulnerabilities that arise.’

A spokesman for Staffordshire University said: ‘We can confirm we have received a complaint about views expressed by Professor Treadwell on Twitter.

‘As we would do normally, this is in the process of being reviewed in accordance with the University’s procedures.

‘As a University we are committed to equality, diversity, and inclusion to ensure we promote a positive culture where everyone is able to be themselves.

‘We are equally committed to academic freedom and lawful freedom of speech. We cannot comment any further at this stage.’ 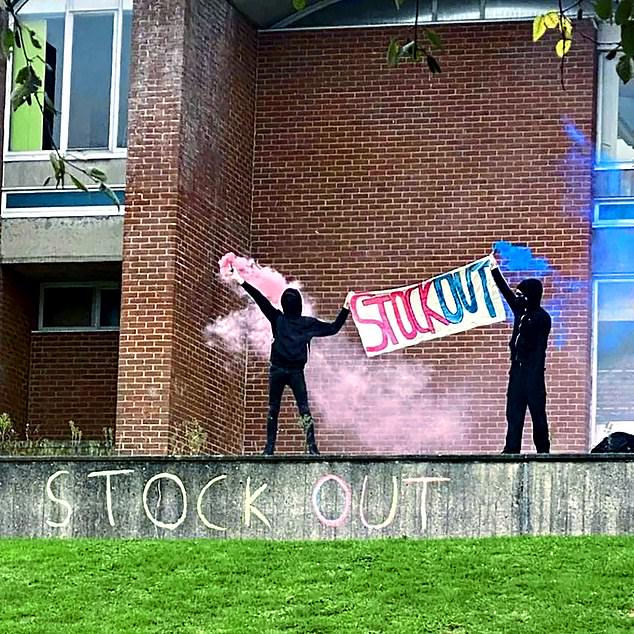 Banners saying ‘Stock Out’ had also been held alongside burning flares and scores of people were criticising her online under the Twitter hashtag #ShameOnSussexUni. 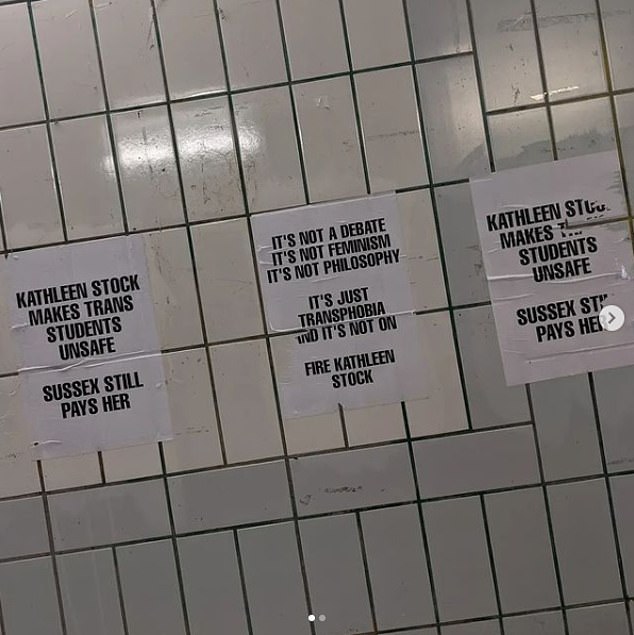 Posters put up in the tunnel from Falmer station to the university’s campus earlier this month said she ‘makes trans students unsafe’ and ‘we’re not paying £9,250 a year for transphobia’

Professor Stock left Sussex at the end of October last year after she had been branded a ‘transphobe’ by some outraged students who had called for her to be fired.

Posters put up in the tunnel from Falmer station to the university’s campus said she ‘makes trans students unsafe’ and ‘we’re not paying £9,250 a year for transphobia’.

Banners saying ‘Stock Out’ had also been held alongside burning flares and scores of people were criticising her online under the Twitter hashtag #ShameOnSussexUni.

The University’s Vice Chancellor Adam Tickell had strongly defended her ‘untrammelled’ right to ‘say what she thinks’, whilst more than 200 academics from other universities signed a letter calling out alleged abuse from ‘trans activist bullies’.

But Professor Stock then announced on Twitter on October 28 that she was ‘sad to announce’ she is leaving her position, and added that she hoped ‘other institutions can learn from this’.

On November 4, it was revealed Professor Phoenix crowdfunded more than £80,000 to take her employers the Open University to an employment tribunal. 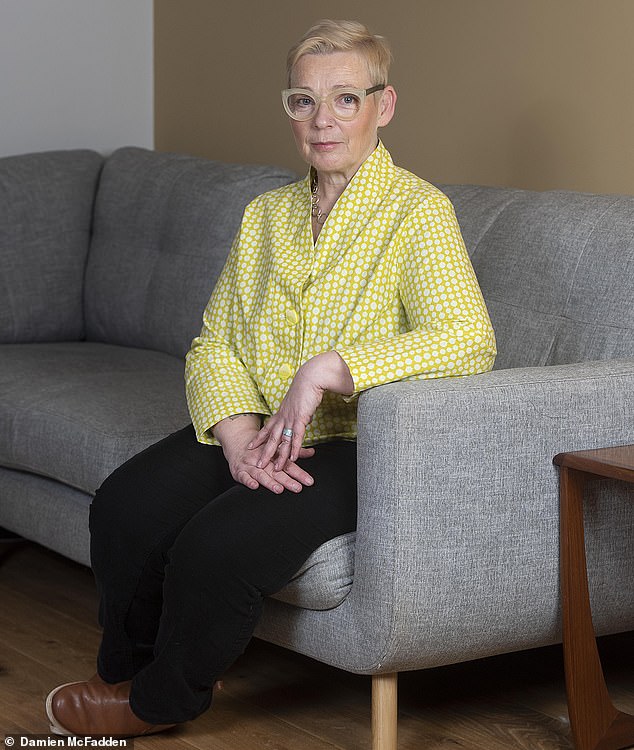 Just days later, Open University academic Professor Jo Phoenix (pictured), who is also a criminologist, described how she was compared to a ‘racist uncle at a Christmas dinner table’ after she aired views about the silencing of academic debate on transgender issues 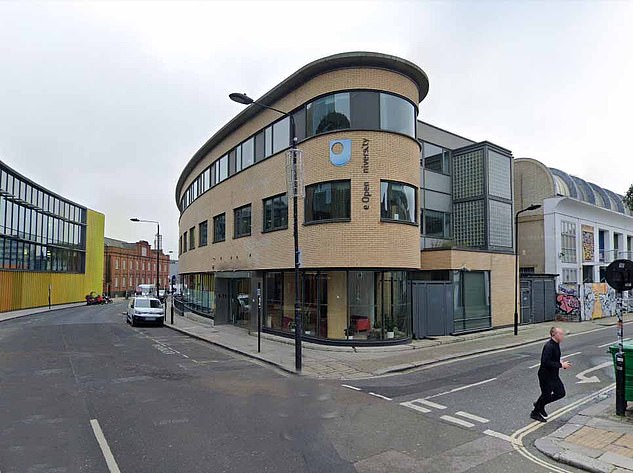 The Open University. Professor Phoenix plans to bring the university to an employment tribunal

She said she had been publicly vilified and suffered public harassment for launching the Open University Gender Critical Research Network.

She also said her view that male-bodied prisoners should not be allowed in female prisons resulted in her being branded transphobic and racist.

Professor Phoenix said things ‘started to go horribly wrong’ when she began speaking out regarding her views.

Listing examples of alleged abuse she has faced, she claimed to have been told she is ‘like a racist uncle at the Christmas dinner table’ by a senior manager.

She added that more than 360 colleagues at the university signed a public letter condemning the research network she founded and called for her employers to remove all support and funding.

A raft of organisations, including Ofcom, Channel 4, the Cabinet Office and the BBC, have left Stonewall’s Diversity Champions programme following criticism of its hard-line policies.

Its boss, Nancy Kelly, had also likened the belief that a person’s sex cannot be changed to anti-Semitism.