Will fans be banned from football? Sports chiefs summoned to Whitehall on Monday for crunch talks on emergency measures as coronavirus crisis worsens

Sport’s governing bodies and television chiefs have been summoned to Sports Secretary Oliver Dowden’s offices to be given the latest ‘clinical guidance’ relating to holding fixtures.

But reports yesterday said Mr Dowden’s officials would in turn seek advice on the practicalities of staging events without fans if the virus outbreak worsens.

The crisis meeting comes after Italy, hard hit by the Covid-19 outbreak, ordered all major sporting events throughout the country to be played without fans for one month in a bid to curb Europe’s worst coronavirus outbreak. 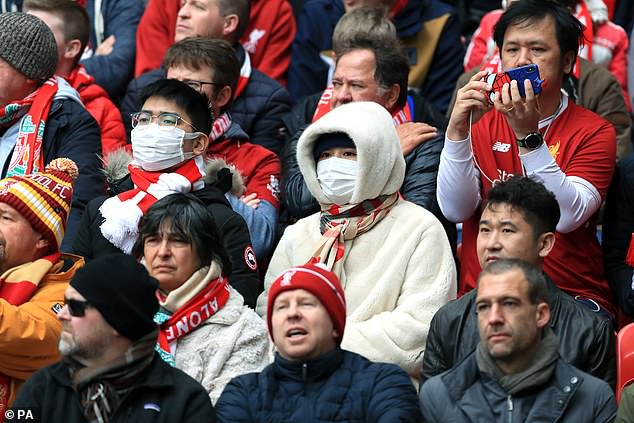 Liverpool fans wear face masks in the stands during the Premier League match at Anfield, Liverpool on Saturday

Last night, Government insiders sought to calm fears that the UK was imminently to copy Italy and order major domestic sporting events – including football’s Premier League games – to be played behind closed doors.

A source insisted that, at present, that was not what medical experts were recommending.

But BBC reports yesterday said that Premier League chiefs were increasingly expecting matches may have to played behind closed doors within the next two weeks – depending on how further Government advice unfolds.

It is understood that today’s meeting at the Department for Digital, Culture, Media and Sport, participants will look at the logistics and feasibility of holding matches without fans, as well as examining contracts and rights considerations.

Football’s Premier League and EFL have already said that they will ditch pre-match handshakes between both teams and officials until further notice because of fears over the virus. That came after the Government asked the Premier League ‘to step up its contingency planning’ as well as repeated Government reminders of the importance of people washing their hands thoroughly to combat the spread of the virus. Several football clubs are also understood to have instructed players not to sign autographs or take selfies with fans. 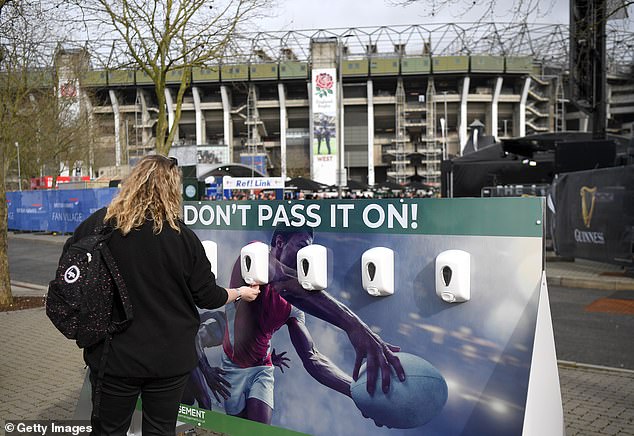 Separately, the International Olympic Committee has stepped up its advice to sports federations around the world on how best they can deal with the coronavirus.

In a letter seen by the BBC, Kit McConnell, the IOC sports director, promised ‘further support’ and said ‘all potential solutions should be explored’ if athletes are at risk of being prevented from competing in qualifying events.

The letter came after many Olympic qualifying events in a range of sports were cancelled in recent weeks – with athletes from countries worst affected by the outbreak such as China and South Korea barred from participating overseas because of travel restrictions or quarantine rules.

However, IOC President Thomas Bach last week insisted he was confident this summer’s Olympics in Tokyo would go ahead as planned.

And in a sign that the Government currently wants major sporting events to go ahead as normal, Boris Johnson was at Twickenham yesterday to see England beat Wales in the Six Nations rugby tournament.

Hand sanitisers were placed outside the stadium.

Last night, a Government source said: ‘The clinical advice is that playing games without fans would not be very effective.’

He suggested that, given the way the virus could spread, sports fans in open-air stadiums were at less risk than people crowded into a pub to watch a match being played behind closed doors.

BT last night pledged extra help for people to access NHS services on the internet in the wake of the virus outbreak.