Home » ‘Signal to the world’: Singapore ready and waiting for Australian travel bubble

Singapore: Singapore’s so-called “Cruises to Nowhere” have been a big hit since being given the green light last November, with more than 120,000 passengers.

“They’ve made something that sounds tacky actually quite fun and enjoyable,” said Arv Sreedhar, a Singapore-based Australian investment banker who took one of the cruises over Easter with his wife and their two-year-old daughter. 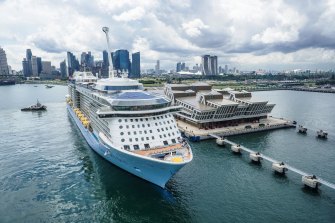 Cruises to Nowhere have been popular in Singapore during the pandemic.

Still, visitor arrival numbers in Singapore – like elsewhere- have dropped off a cliff, plunging by 85 per cent in 2020.

Yet the pilot program with the cruises and other initiatives – such as a short-stay airport hotel for business travellers that has meeting rooms with air-tight glass panels – have demonstrated a response to the pandemic that marries forensic internal control measures with flexibility about its international borders.

Singapore, which hasn’t had major community transmission of the virus since emerging from a two-month “circuit breaker” lockdown last June, currently allows visitors from “low risk” countries such as Australia, Brunei, China, New Zealand and Taiwan to fly in and only have to isolate for the few hours it takes to return a negative COVID-19 test. 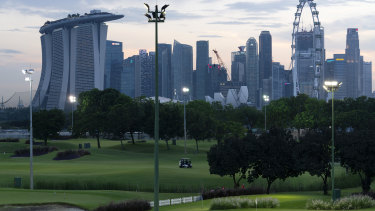 Things getting back to normal: Dusk at the Marina Bay Golf Course in Singapore.Credit:Bloomberg

On Monday, it also announced the long awaited two-way travel bubble with fellow financial hub Hong Kong would finally begin on May 26.

But as Australia hasn’t yet removed or at least reduced quarantine demands, the rest remain effectively one-way travel corridors.

“We had our own unilateral opening in the hope that it would spur some reciprocation, which obviously hasn’t happened,” Singapore Tourism Board chief executive Keith Tan told The Sydney Morning Herald and The Age.

“Nevertheless it was a signal to the world that Singapore was already prepared to open our borders in a safe way and a considered way.”

“We were not throwing up high walls.

“We had a risk minimisation approach and a risk management approach rather than a risk elimination approach, which is what many other countries including what possibly Australia have done.” 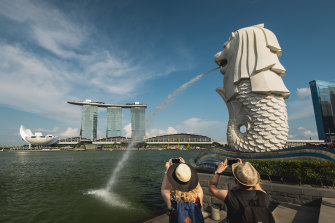 After the opening of Australia’s travel bubble with New Zealand, Singapore has been suggested as next cab off the rank for Australia.

But with the vaccine rollout going at snail’s pace in Australia, Singapore is not holding its breath.

Singapore Prime Minister Lee Hsien Loong wearing a mask, which is mandatory in the island nation, shows his ID before voting last year.Credit:AP

“[To say] how confident we are … it all depends on the Australian government because we’ve opened up to Australia,” Tan said.

“We’ve likened it to a dance. In order to dance, you need two people to dance together.”

Singapore’s outbreak peaked at more than 1000 new cases of the virus a day last April, centred around its large migrant workers community. Since then, Singapore has been one of the few countries in south-east Asia not engulfed by a new wave that has swept through the region.

While its poorer neighbours are also struggling with insufficient vaccine supply on top of crippling surges of COVID-19, Singapore has inoculated 23 per cent of its population of 5.8 million with the Pfizer-BioNTech and Moderna shots.

Jeremy Lim, an Associate Professor at the National University of Singapore’s school of public health, said the country’s response can be split in four parts.

The first stage was when the pandemic broke out in Wuhan. “I think at that stage they did very well.”

The Singapore government’s response in which it threw “everything including the kitchen sink to bring the outbreak under control”, was the third stage.

”And we’re now in the fourth part, where life is pretty much back to normal.”

In the midst of the success story, though, Singapore faces claims the more than 300,000 migrant workers in the country, most of them of south Asian origin, have been treated as “less than human” during the pandemic.

The majority of the 60,000-plus cases of the virus here have been among foreign workers, who have remained confined to dormitories and workplaces aside from three visits a week to “recreation centres” set up for them by the government.

There was a fresh scare last week. A cluster of positive tests in a dormitory in the north of the island triggered fears about the virus being spread by newly arrived workers from hard-hit India.

Human Rights Watch , however, is scathing of Singapore’s treatment of migrant workers “as second class at every step of the pandemic”, saying many had suffered psychologically as a result.

“Then in the face of outbreaks among migrant workers, they sealed off the areas around the dormitories, sent in food and tests, but essentially let the virus spread through the ranks to achieve herd immunity.

Singapore’s Ministry of Manpower, which oversees the labour force, says it is improving housing standards, providing 24-hour medical care and has in place a seven-point mental health strategy for supporting migrant workers.

“We are also currently drawing up plans to allow eligible workers to visit the community once a month,” said new Minister for Manpower Tan See Leng in a speech last month.

“We understand and we empathise with the need for social interaction. At the same time, we are also concerned about the livelihoods of workers should a second wave or cluster emerge in the dormitories.

“We have no intention whatsoever for restrictions to be stricter than necessary or to be in place for a longer time than is necessary.”

If the government is exercising an “abundance of caution”, as Lim summarises it, with respect to foreign workers, the same can be said elsewhere with its mandatory mask policy, limitations on gatherings and a meticulous and carefully policed contact tracing system.

The small population and land mass of the island have helped the country advance its vaccine rollout but in Singapore there is another factor.

“I think the more important thing is money,” Lim said. “The Singapore government is reported to have spent $S1 billion ($A970 million) to procure vaccines.