Horrific surveillance footage from a Philadelphia gas station shows the moment a gang burst out of a white van and carjacked a man at gunpoint in Germantown as the city’s crime rate rises.

The footage shows a man, 29, pumping gas at a Sunoco station located at Wissahickon Avenue and Rittenhouse Lane around 10pm on Saturday when suddenly four men with guns jump out of a van parked at the pump in front of him.

Startled by the surprise confrontation, the victim ran toward the gas station’s building as multiple guns were pointed at him – including one from a man that jumped on the roof of the victim’s red Chrysler 300, threatening him from above.

‘It looks like something out of a movie, because of that guy jumping on the car,’ Sunoco customer Antonius Mikuriya, told ABC 6 on Monday.

The masked gun men all ran after the victim but then shortly took off in the man’s red sedan and the white van. The suspects fled in both cars in different directions.

Three other cars were also parked at the gas station when the scene unfolded.

No arrests have been made, the Philadelphia Police Department told DailyMail.com. 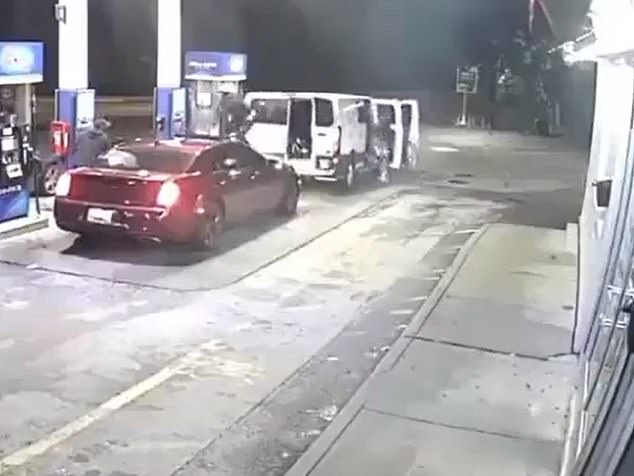 Footage from a Philadelphia gas station showed the moment a gang burst out of a white van and carjacked a man at gunpoint in Germantown, as the city’s crime rate rises 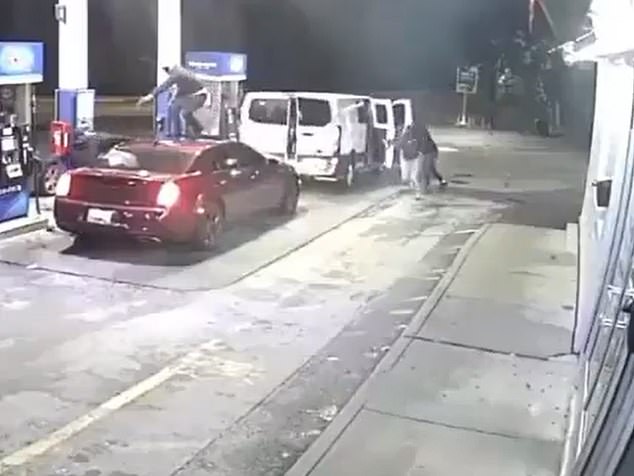 Quickly, the thieves ran around the car with one jumping on the roof of the victim’s car 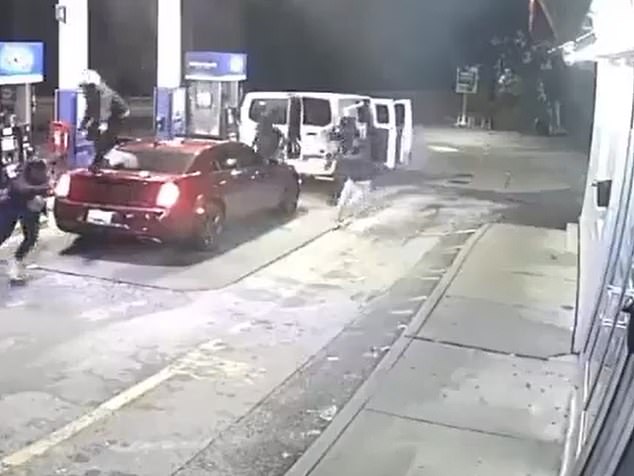 The man, 29, was pumping gas at a Sunoco gas station located at Wissahickon Avenue and Rittenhouse Lane around 10pm on Saturday when he was ambushed 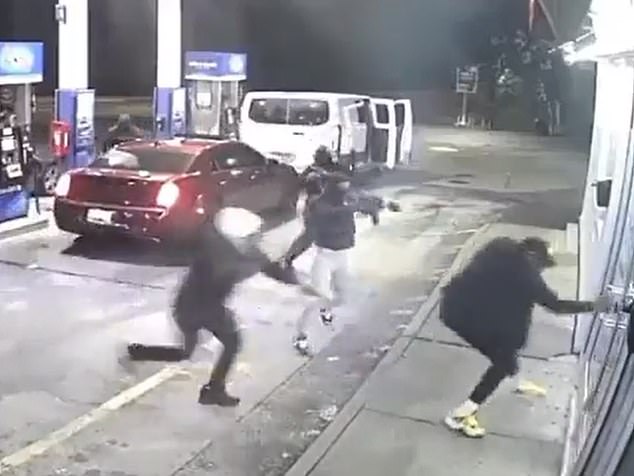 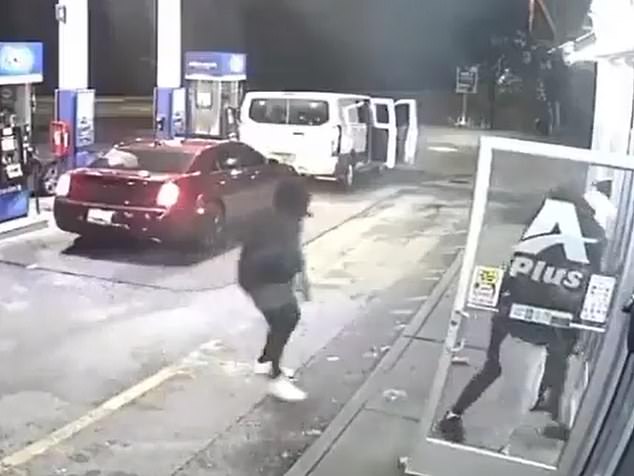 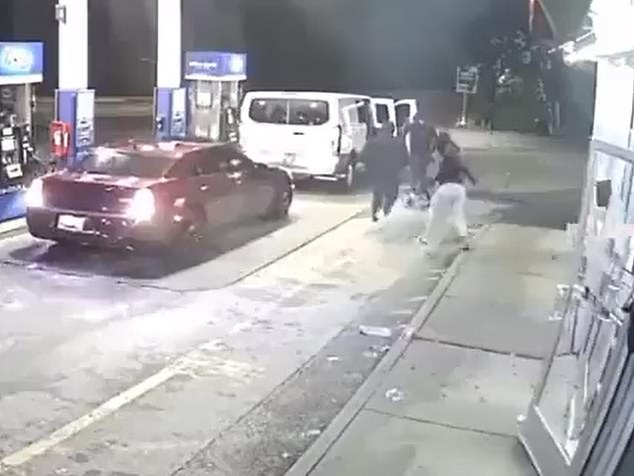 Within seconds, the thieves made their way outside and rushed into the man’s red sedan and the white van 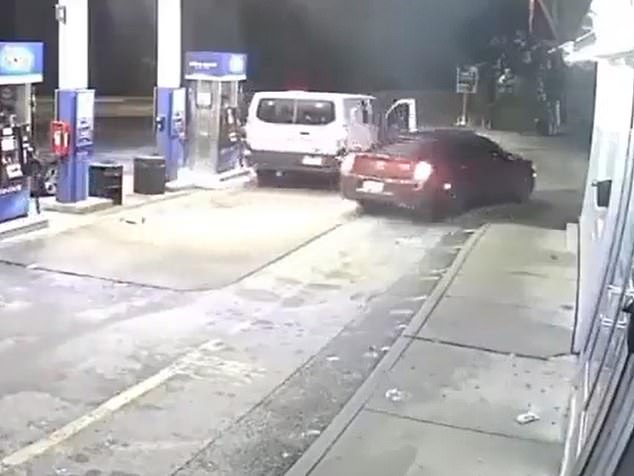 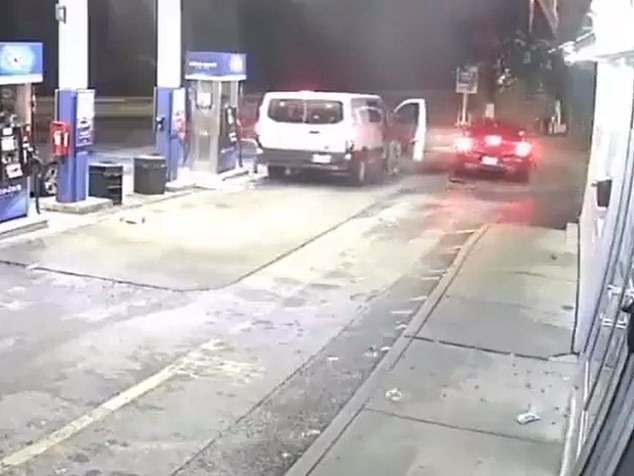 The thieves then took off in separate directions. The van has yet to be identified 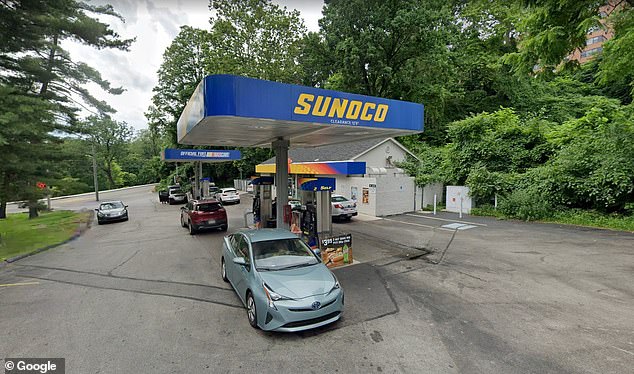 Sunoco gas station during the day 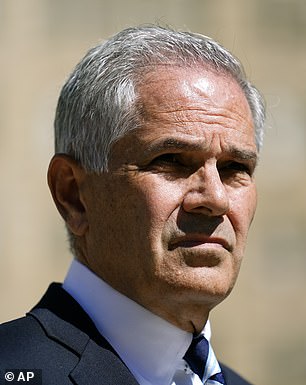 Philadelphia has experienced an increase in crime, and some say Woke Philadelphia District Attorney Larry Krasner is the one to blame.

Krasner has made changes to implement a variety of liberal ideologies since taking office in 2018, including lowering incarceration rates and the jail population.

Krasner, who won reelection in 2021, also decreased the jail population by 40 percent – plunging it its lowest level since 1985, according to his website.

To avoid rising incarceration rates, Krasner has also halted the prosecution of simple drug possession cases and promoted treatment for perpetrator’s instead of jail time.

Robberies in Philadelphia have risen by 35.4 percent, or 1,154 more cases, since last year.

The number of shooting victims is up, by 1.2 percent, with 21 more cases as of October 2 in comparison to last year.

Homicide rates are also up in the state and have gradually increased over the past few years with 444 documented in 2022 to date, and 256 reported when Krasner took office in 2018. In 2017, 236 homicides were reported.

Krasner has also avoided the death penalty for convicts and resentenced minors who were sentenced to life without parole. 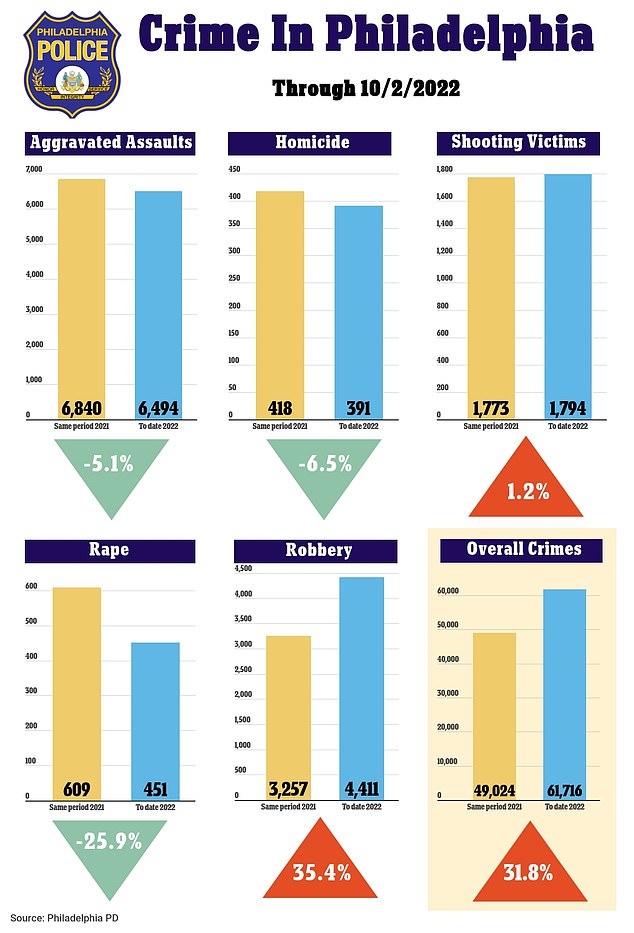 Crime states in Philadelphia show the city is facing an increase in crime by 31.8 percent in comparison to the same time last year

Krasner appeared on Good Day Philadelphia last month to discuss the recent crime wave in the city and respond to accusations that he is the one to blame.

‘We have a terrible crisis in this country when it comes to gun violence. I don’t have good news for you, but I will tell you the number of homicides this day last year was more,’ Krasner said.

When asked about his policies that have let those with gun charges back out into the streets, Krasner claimed that it was the direction the city should go in.

‘We do not want to just be prosecuting people after the crime, we want to stop the crime from happening and save that victim’s life,’ he said of his measures.

The hosts interviewing Krasner pushed back on his rhetoric of improvement and asked what tangible solutions he will provide to solve the issue.

‘The lesson is that we were in a shaky position when the pandemic hit and there should have been a lot more money into things like football, which are necessary for prevention, which is constructive,’ he responded.

‘The areas of this city where we had the highest level of support were the areas that are most affected by gun violence because they believe in what we’re trying to do,’ he said.

‘The perception is there for political reasons and only within certain communities,’ Krasner continued, alluding to rural counties that are typically against the DA.

Multiple incidents have been recorded and widely viewed, including mass looting and other brazen assaults, like when a man waiting for the subway was held at gunpoint by a masked man. 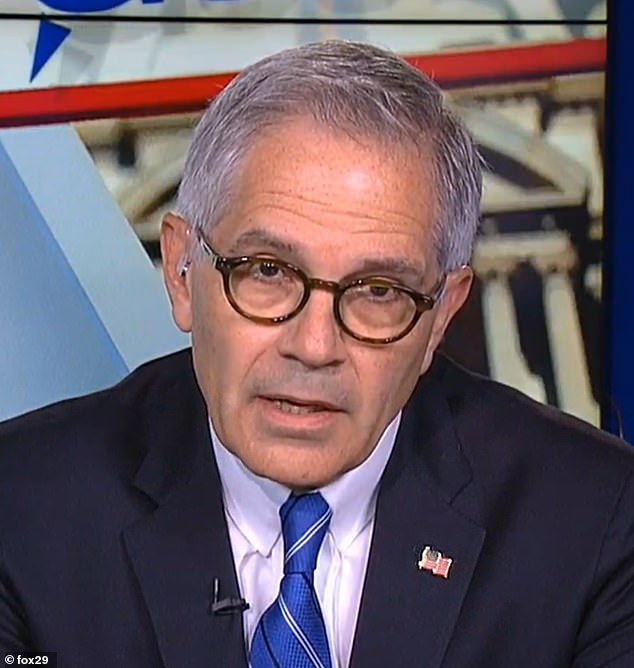 Philadelphia DA Larry Krasner appeared on Good Day Philadelphia, and defended his policies that many believe have resulted in a crime surge 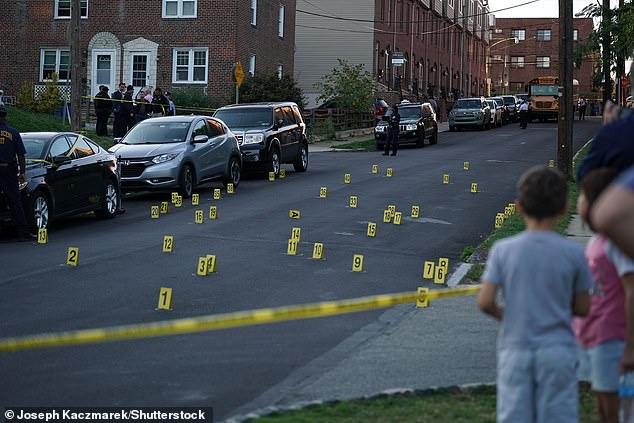 Krasner said he hopes to prevent crimes before they happen. Robberies in Philadelphia have risen by 35.4 percent, or 1,154 more cases, since last year. The number of shooting victims is up, by 1.2 percent, with 21 more cases as of October 2 in comparison to last year.

In addition to Saturday’s carjacking, the Philadelphia Police Department recently shared another incident of a car being stolen from a mother and her daughter on the morning of September 19.

In a release sent to DailyMail.com, police describe the unidentified suspect as a Black male teen and the victims as a 48-year-old woman and her 14-year-old daughter.

The video shows the woman and her daughter heading out for the day when a man, who was earlier seen riding a bicycle on the sidewalk, ambushes the pair. 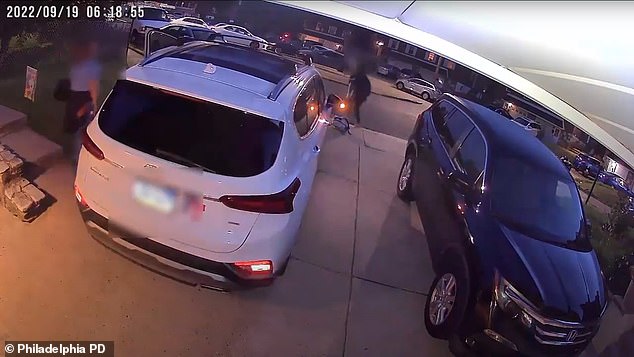 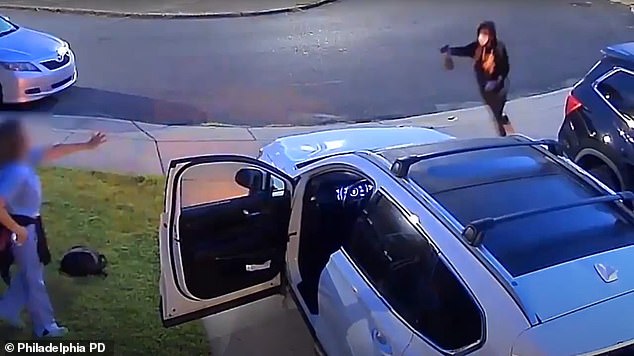 After chasing the teenage girl into the street, the suspect turns his attention to the mother, pointing the gun at her as he moves towards the driver’s side of the vehicle

One suspect appears to hide behind another car in the driveway before eventually sneaking up on the mother and daughter, brandishing a weapon.

A victim in the video can be heard screaming ‘don’t shoot’ as the suspect begins to run up on the women.

The video ends with a plea from police, urging anyone who knows or recognizes the suspect to come forward.

At one point in the video, the victims can be heard loudly screaming and pleading with the suspect.

The 48-year-old was able to track her vehicle with a smartlink assistance feature and the car was later recovered on the 2000 block of Griffith Street. 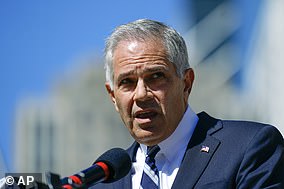