This is the shocking moment two thugs were caught repeatedly kicking a dog who got in their way while they were arguing over money.

The pair has been now appeared in court and have been disqualified from keeping pets for three years.

The footage that was captured on CCTV shows the two men who were in the middle of an arguement, shouting and kicking at the poor dog that looked on.

At some point Nash even drags Panda violently towards the house, pulling him by his front paw whilst Cassell shouts at the petrified pet to get inside.

Police and RSPCA inspectors were called to the scene in Braintree, Essex.

Panda was placed into RSPCA care and a vet who witnessed the horrific 18-second CCTV clip revealed the dog’s attitude when first seen on the video showed signs of fear with his ears back, tail between the legs.

The men appeared before Chelmsford Magistrates’ Court for sentencing after both pleaded guilty, at an earlier hearing, to causing unnecessary suffering to a dog.

They were both barred from keeping dogs for three years.

RSPCA inspector Jessica Dayes who investigated the incident said: ‘The footage was extremely concerning, the dog appeared in the video fearful and the vet report stated this was an unacceptable way to discipline or train a dog and would have caused unnecessary suffering.’ 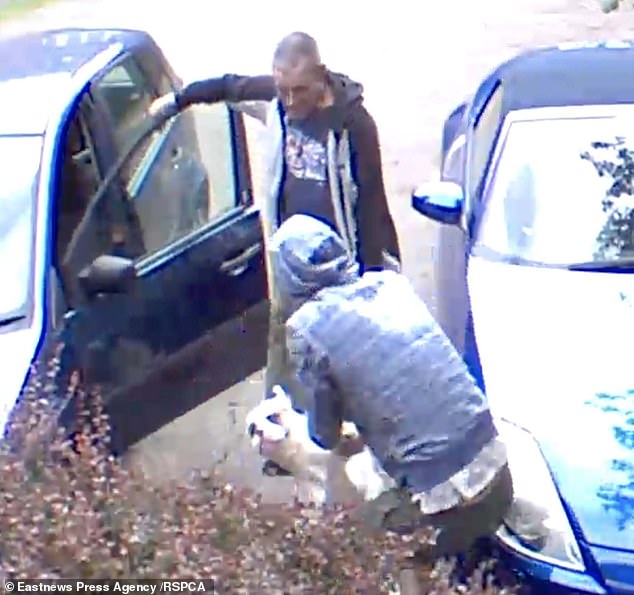 Paul Cassell ,55 and Graham Nash, 29, were having an arguement over money when Panda got in their way

The court made a deprivation order regarding Panda who thankfully is now doing well in RSPCA care.

Cassell was ordered to carry out an 18-month community order to comprise of 25 Rehabilitation Activity Requirement days and a curfew from 7pm to 7am for 8 weeks which would be electronically monitored.

He was disqualified from keeping dogs for three years and ordered to pay £600 costs and £95 victim surcharge.

Nash was ordered to carry out an 18-month community order to comprise of 30 Rehabilitation Activity Requirement days and 150-hours of unpaid work. 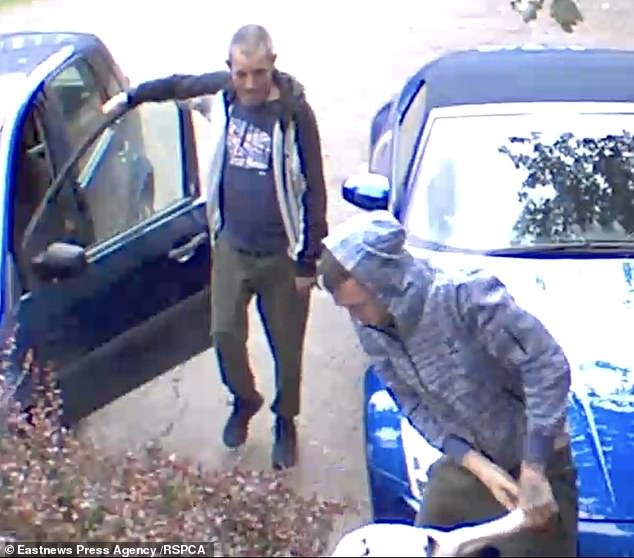 Graham Nash, 29 can be seen dragging Panda towards the house while shouting at him

He was also disqualified from keeping dogs for three years and ordered to pay £600 court costs and a £95 victim surcharge.

In mitigation it was said the pair, both from Braintree said they had been arguing over money and took out the frustration on the dog.

The shocking ordeal for Panda unfolded on July 7 this year.

Cassell admitted the offence of causing unnecessary mental or physical suffering by kicking the animal in the face.

Nash admitted the offence of causing unnecessary suffering to the same dog by a combination of kicking the animal and by using inappropriate handling and force.