A STUDENT sparked controversy after he was reportedly denied his high school diploma for wearing a Mexican flag over his graduation gown and allegedly refusing to apologize.

Ever Lopez said that he wanted to honor his Mexican heritage as the first person in his immediate family to graduate during the ceremony in Asheboro High School in North Carolina on Thursday night. 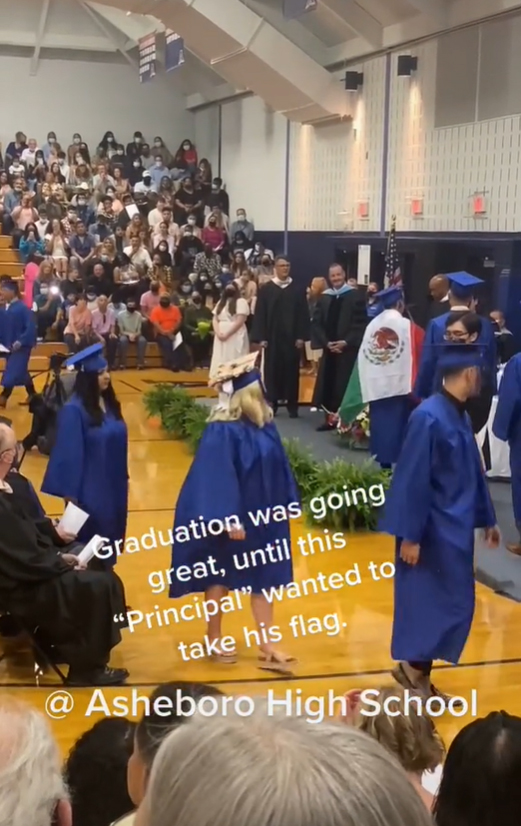 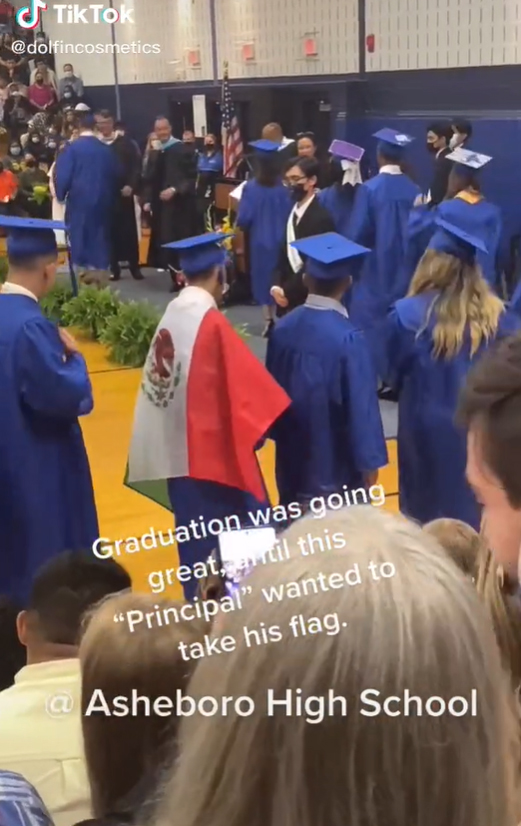 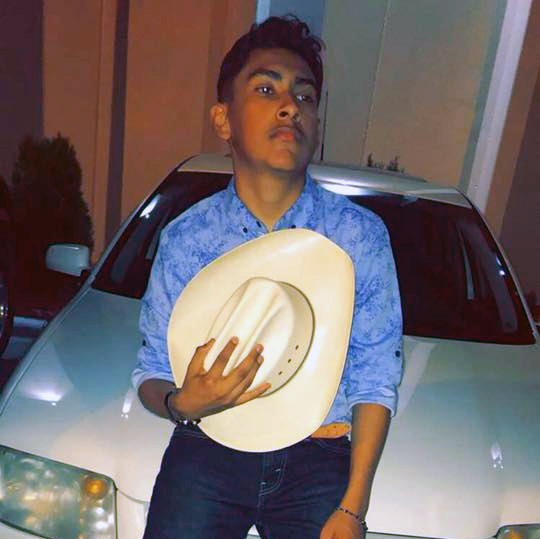 It was followed by a later clip of his family receiving a police escort from the premises.

Lopez's family has claimed that the school demanded an apology and would not give him his diploma until he did so.

Yet the school district has argued that an apology request was never issued and Lopez's diploma has been available to pick up since Friday. 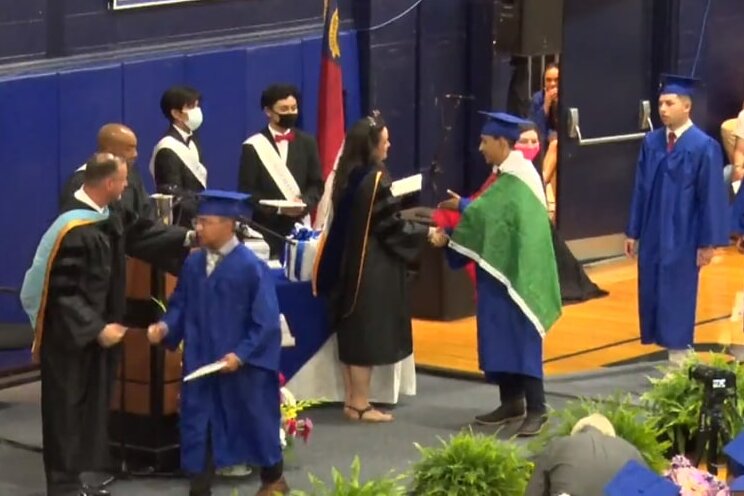 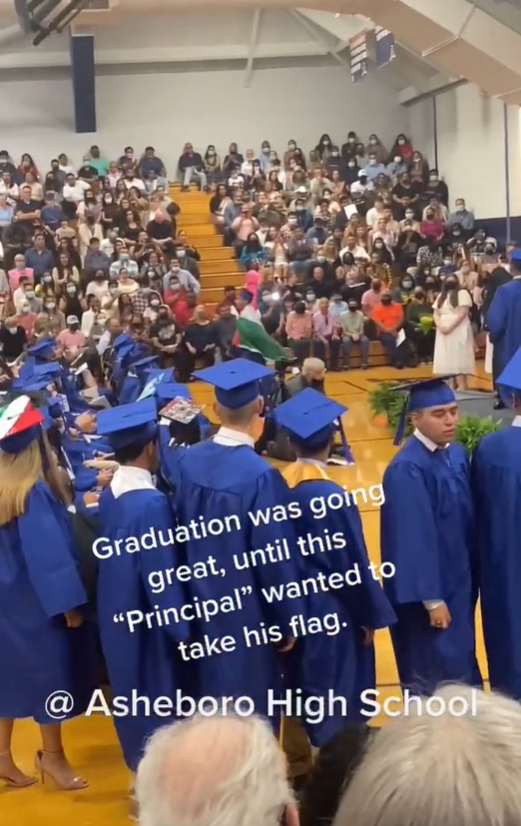 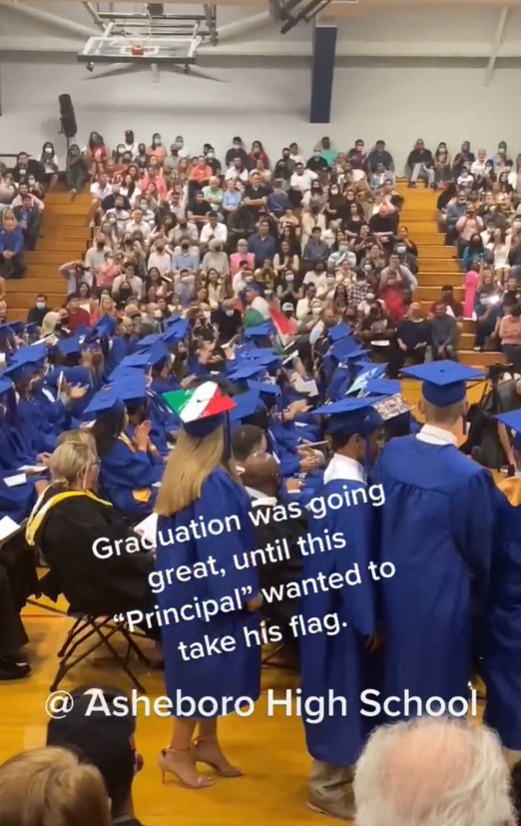 Video of the moment was posted to TikTok by the teen's cousin Adolfo Hurtado.

It showed Lopez cross the stage with other students but stopping to talk with Principal Penny Crooks.

The cheers that greeted his name turn to boos as he's seen stuggling with the top of the flag before moving forward again on the stage.

He raises a fist as he returns to his seat.

"Sadly, he did not get the diploma," the video was captioned.

"The teacher wants him to apologize — obviously he's not going to do that."

The second video shows his family arguing with Crooks in a hallway and claiming it "makes you a racist now."

“He and his parents can come back tomorrow, and we can talk about it,” Crooks says in the video viewed more than seven million times. 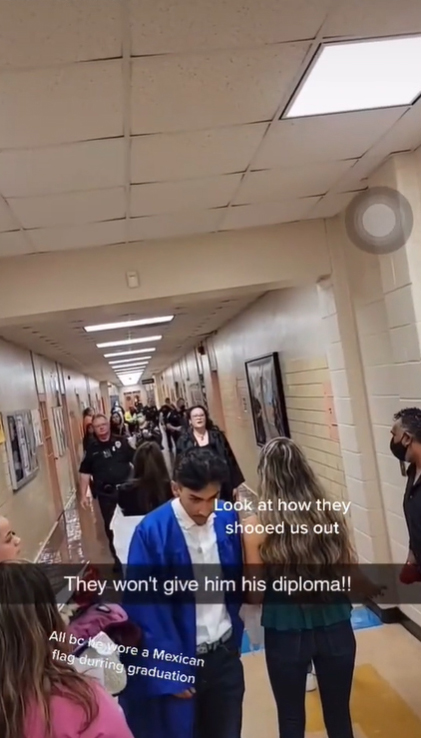 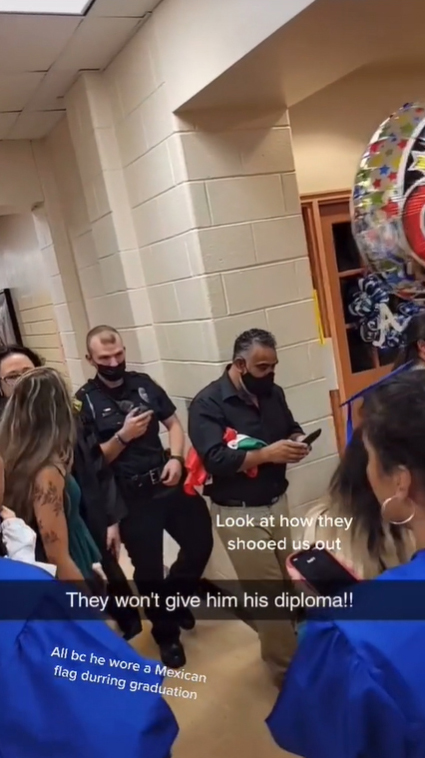 "When I got up there I went for the handshake and I wasn't thinking nothing of it and I heard her say, 'You can't wear that,'" Lopez, who was born in the United States to Mexican-immigrant parents, told ABC News.

He said that he was given a diploma holder but denied the document once he reached the end of the stage.

The school has insisted that Lopez "violated the ceremony's dress code" and "the incident is not about the Mexican flag."

It stated that the code says students can alter their caps as they like but that no flags are allowed.

Other students in the livestream of the event can be seen with Mexian flags drawn onto their caps.

However, the school has been blasted as racist with a protest led by Lopez's family and friends taking place on Friday. 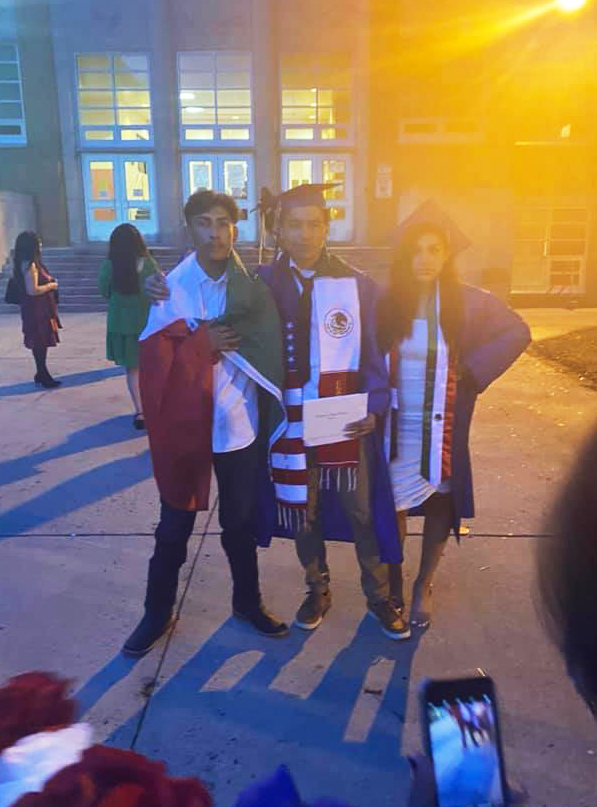 "It means everything to me," Lopez told ABC of the flag.

"My parents, my whole family, is from over there. I did it for them because they had a rough childhood; they didn't get the scholarship that I got, or they didn't get to go to school like I did.

"Representing my flag and getting a diploma was really important to me because I was basically doing it for my family."

He added that the school said he would only get his diploma if he apologized.

"I don't know why I should apologize when it should be heard, because I did nothing wrong," he claimed.

Asheboro city school district told ABC on Sunday that an apology was not required.

It added that "the wearing of a flag of any kind is a violation of the dress code." 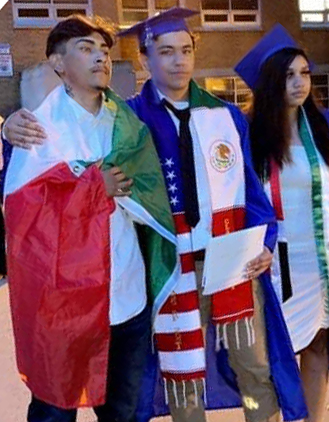 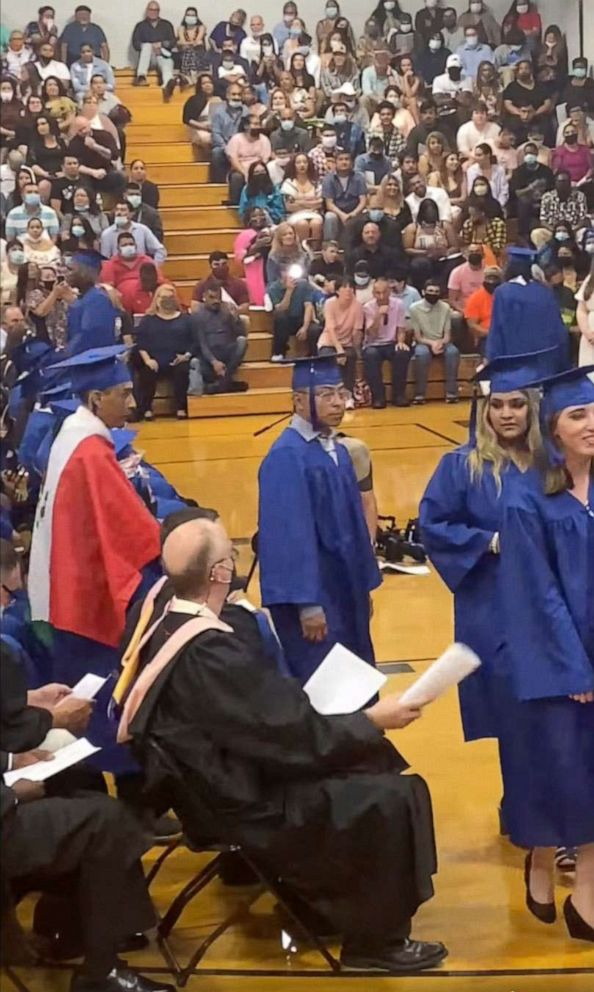 In its own statement, the school insisted that "students were encouraged to express their identity by decorating their mortarboards.

"A number of students followed the protocol and had the Mexican flag and other representations appropriately displayed during the ceremony."

It said that Lopez's actions “detracted from the importance and the solemnity of the ceremony.”

In an earlier statement issued on Friday, the school said it would “continue working to resolve this issue with the student and his family so that he will receive his diploma from Asheboro High School.”

Asheboro police confirmed that they escorted Lopez's family from the school "after a request was made by Principal [Penny] Crooks."

Officers were stationed at the event in an "an approved off-duty capacity."

Lopez insists that the ban on flags was not previously discussed with students.

He has yet to receive his diploma as of Sunday afternoon.

His mother told the New York Times that she received an email from Crooks on Sunday saying that he could pick up the diploma this week.

Yet she says the family also want an apology.

“To me, this was an act of racism, not just to my son but to the entire Hispanic community,” she said.