The earthquake that hit Victoria on Wednesday morning is probably the result of tectonic plate pressure in New Zealand that built up slowly and then released suddenly in a rupture at a fault east of Melbourne.

Geoscience Australia put the 9.15am quake’s magnitude – a measure of the energy released – at about 5.9. The quake’s epicentre was just south of Mansfield and about 10 kilometres below the Earth’s surface.

In that region, the ground probably moved about 10 centimetres over the course of the earthquake.

Victoria’s building code requires properties to be designed to withstand accelerations of 8 to 9 per cent G in the Melbourne area. Per cent G is a measure of force – a percentage of gravitational acceleration.

The quake may have reached that level near the epicentre, but in Melbourne it probably measured only 1 per cent G – explaining why the city appears to have emerged relatively unscathed.

Dr Gary Gibson, principal research fellow in seismology at the University of Melbourne, said the quake was “the largest I have seen in Victoria in the last 50 years”.

“The epicentre is south of Mount Buller, north of Morwell, halfway between Woods Point and Licola. They are the only significant places with any significant population in the area.

“It’s in a good place to limit any population damage.”

Woods Point and Licola may have suffered significant damage, he said.

Mark Quigley, associate professor of earthquake science at the University of Melbourne, said aftershocks were likely.

“Aftershocks are common after an earthquake. They are usually not the same magnitude – you’d expect smaller shakes. People should be wary and mindful that they might experience aftershocks. If you’ve got some belongings resting precariously on a shelf, it might be wise to move those.” 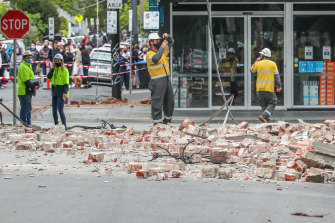 Buildings along Chapel Street in Melbourne were damaged in Wednesday’s earthquake.Credit:Asanka Ratnayake/Getty Images

Six on the Richter scale

Geoscientists measure an earthquake’s energy on the Richter scale, which is logarithmic: level 6 is 10 times higher than level 5, for example. Quakes below 3 generally cannot be felt by humans.

Geoscience Australia estimates the quake had a magnitude of about 5.9 and was about 10 kilometres below the surface.

The Christchurch earthquake was measured at 6.3 but caused so much damage to the New Zealand city because it struck directly and was very shallow.

The Richter scale does not measure the damage done by an earthquake, as quakes of the same magnitude can do wildly different amounts of harm depending on how deep they are and where they strike.

It is not yet certain what caused the earthquake, but geoscientists’ early suspicions focused on a fault zone at the quake’s epicentre, near the Mount Skene Reserve.

A fault zone is a region of weakness in the Earth’s crust, caused by a fracture or series of fractures in rock. During an earthquake, the rocks on both sides of the fault zone can slip suddenly relatively to one another.

Melbourne sits in a zone that was “part of an ancient mountain belt formed there between 350 and 450 million years ago”, said University of Sydney geoscientist Associate Professor Patrice Rey. “These mountain beds left zones of weakness, in the form of faults and fractures.”

When pressure builds up in tectonic plates, it can be released suddenly at spots of weakness – such as faults.

“Like if you break something, even if you manage to glue it again, usually it breaks again on the same spot,” said Professor Rey.

The pressure was probably caused by events far to Australia’s east.

“We can blame this earthquake on the Kiwis, to some extent,” said Paul Somerville, chief geoscientist at catastrophe loss modeller Risk Frontiers.

Australia is generally a stable continent. But all continents are subject to tectonic pressures.

New Zealand’s two islands lie on the edge of the Australian and Pacific tectonic plates. The Pacific plate is slowly pushing west into the Australian plate, causing mountain ranges in Australia – such as the Strzelecki ranges – to be pushed upward.

It causes stress right across the Australian plate, which can be suddenly released at faults.

“Although the pushing is occurring at the plate margin, it creates stress in the interior of the Australian plate. From time to time, that stress exceeds the strength of the fault locally, and it fails,” said Mr Somerville.

Australia’s building code mandates that properties must withstand ground accelerations of 8 to 9 per cent G.

“The ground-shaking this earthquake caused would be something like 1 per cent – so well below that design level. That’s why it really hasn’t done much damage,” said Mr Somerville.

However, the ground acceleration was probably closer to 8 or 9 per cent near the epicentre, he said, and more damage may have been done there.

Associate Professor Behzad Fatahi, an expert in earthquake engineering at the University of Technology Sydney, said Australian multistorey buildings were generally designed to withstand earthquakes in the region of magnitude 6.

The most at-risk structures would be external extensions and add-ons, such as cafe louvres and outdoor dining areas, he said.

“I assume most of the damage I expect to see in regional Victoria, but mainly I expect more reports to come from the Melbourne region – these secondary structures, attached to the main buildings, would be damaged. And, of course, these are quite dangerous. People are outside, walking past, they may run out of the building.”

Liam Mannix’s Examine newsletter explains and analyses science with a rigorous focus on the evidence. Sign up to get it each week.