Schoolboy, 16, who hugged Meghan Markle says mother is his real hero ‘for taking care of me and my three brothers’ as he admits his ego ‘won’t fit in the door when I get back to school’

A schoolboy who hugged Meghan Markle after she hosted an event at his school in east London, today said his mother is his real hero for taking care of him and his three brothers.

Head boy Aker Okoye received a rapturous applause when he bounded on stage to embrace the Duchess of Sussex during her visit to Robert Clack Upper School in Dagenham on Friday.

Aker said his ego ‘won’t fit through the door’ when he returns to school but today admitted that he was ‘proud of his mother Shorell who he also said was an ‘amazing netball player’.

Speaking on Good Morning Britain today, the 16-year-old praised his mother, who also appeared on the show with him.

He said: ‘My mum is a hero, she takes care of me and my three brothers, she isn’t just a mum and she has a life as well, which is usually a stereo type, she is an athlete, she plays netball. 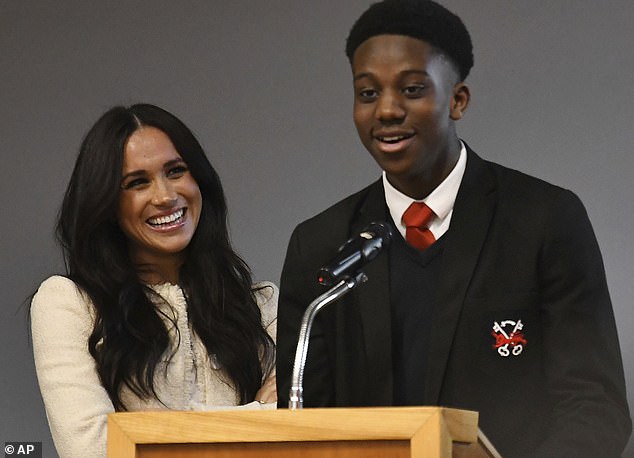 Pictured: the Duchess of Sussex smiles as head boy Aker Okoye address a school assembly during her surprise visit to the Robert Clack Upper School in Essex, March 6, 2020 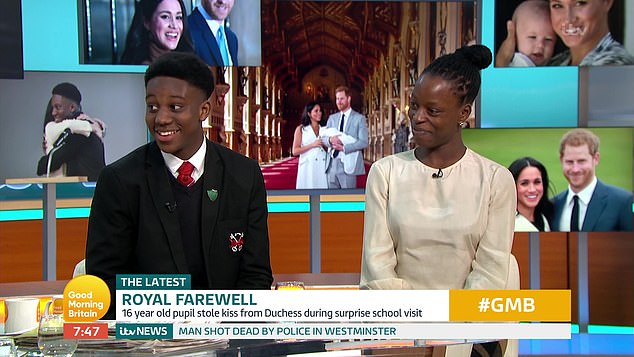 ‘She can do anything and everything, I hope my mum can show other black females that anything is possible.’

He added that one of the reasons he chose to get up on stage and talk about International Women’s Day was because he felt women’s rights had been ‘under looked’.

‘I was passionate about recognising the strong women in my personal life and giving them recognition, because what I have realised, I am studying history – even my history teacher is a female, what I have realised from looking back is that women’s rights and women’s struggles have always been a talking point.

‘It has always been something important and under looked and not given the right amount of attention. So now that I’m a man and benefit from the patriarch I can at least say I recognise their achievements and I am in awe of their presence.’

Shorell said she was proud of her son and said she wasn’t aware Meghan was scheduled to host an event at the school.

‘It was a shock, we had a phone call saying she was going to be there, I thought that was lovely but I didn’t expect all of this afterwards, but I am not surprised we are here’.

Speaking about his speech, Piers joked that Aker decided to start with a one liner.

He opened with: ‘She really is beautiful innit’. A line which made everyone cheer in the crowd.

Watching it back,Aker sai he was really embarrassed.

Piers said it had been a ‘human moment’ and asked what Meghan had told the youngster after his joke.

Aker: ‘She said it was ‘very well said”. He then admitted he had penned a handwritten apology to Prince Harry for hugging his wife.

‘I didn’t want to cause any more controversy, there was an Instagram comment on a post I was on which said if I’m dead in the next six months then we know who’s sent the hit out, so I thought I better cover myself’.

Susanna then asked Aker what it had been like to get close to the Duchess.

‘She was really humble and down to earth’, he said.

‘She is more than that, she is an amazing person. I was flabbergasted – it was an amazing moment. It was one of those moments that I will cherish for the rest of my life.’

‘She is more than a pretty face she is strong committed and I was privileged to be in her presence.’

Piers asked Aker what it meant for the black community to have Meghan marry Prince Harry.

‘I think it shows we are present and shows us as a caucus, as a group and as a race, it gives us hope and a little bit of drive as well.’

His mother said she was pleased Meghan had been in the UK and was ‘glad’ that she had lived here for the time she had.