Rome: A leading candidate to become the next mayor of Rome has come in for furious criticism after saying that the Holocaust is commemorated chiefly because Jews have huge political power and “control the banks”.

Enrico Michetti, a radio presenter, lawyer and candidate for the right, said that other mass killings in history were remembered less well because the victims “did not own banks and did not belong to a lobby that is capable of deciding the destiny of the planet”. 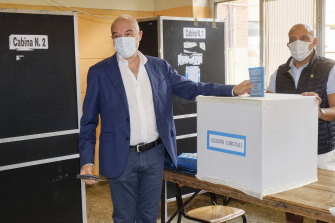 He made the remarks in an article he wrote last year which until now had gone largely unnoticed.

Michetti, who is up against a candidate from the centre-Left in a run-off vote in the Italian capital this weekend, was accused of anti-Semitism by politicians and Jewish groups.

“My grandparents, who were gassed at Auschwitz, were much poorer than you, Michetti, as were my uncle and aunt and my great uncles and aunts,” said Emanuele Fiano, a Jewish MP from the centre-Left Democratic Party.

He said he hoped Michetti would be “ashamed of these words for the rest of your life”.

Michetti was forced to issue a hasty apology, saying that the millions of Jewish men and women who were murdered during the Holocaust “were not to blame in any way”.

It is not the first time that Michetti’s views have caused dismay.

On the campaign trail earlier this year, he suggested that the city’s inhabitants should revive the stiff-armed Roman salute because that way they could greet each other without the risk of touching and spreading COVID-19.

The Roman salute is closely associated with Italy’s 20 years under Benito Mussolini and Michetti was accused of being nostalgic for the fascist era.

He is supported as a candidate for mayor by an alliance of right-wing parties, including the far-right Brothers of Italy.

Michetti faces a run-off vote this weekend against Roberto Gualtieri, who is the candidate for the centre-Left Democratic Party (PD).

On Sunday PD presented a motion in parliament calling on the government to dissolve Forza Nuova and all political movements of neo-fascist inspiration.