How Charles hid his nervousness behind bravado: Body language expert JUDI JAMES reveals how the Queen’s son ‘steeled himself’ to deliver speech on behalf of his mother

Prince Charles hid his nerves behind an arrival marked with bravado on the most momentous day of his Royal service so far, a body language expert claimed.

An emotional Charles today stepped in for his mother at the 11th hour to read the Queen’s Speech after the 96-year-old monarch was forced to watch on from home on TV due to ongoing mobility problems.

The heir to the throne ‘reflectively’ gazed at the crown before he announced 38 of Boris Johnson’s Bills for the coming year, including new laws to punish eco zealots, capitalise on Brexit and ensure Britons can pay their soaring bills.

Prince Charles had addressed the House of Lords after the monarch, 96, obeyed doctor’s orders to miss the State Opening of Parliament for the first time in 59 years.

But a body language expert has claimed that despite arriving ‘with bravado’, his involuntary head actions and ‘shaky’ hands betrayed his nerves ahead of the historic moment.

Judi James also shared how Charles’ expression became more reflective once he approached his ‘consort’ throne and looked on at the Imperial State Crown. 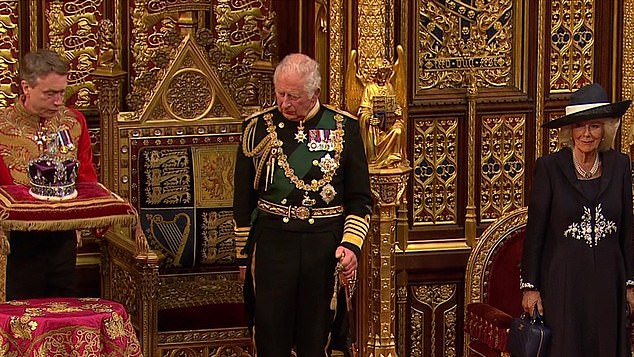 Charles appeared emotional as he looked at this mother’s crown as he became the first royal to read the Queen’s Speech in his mother’s absence, supported by his wife Camilla 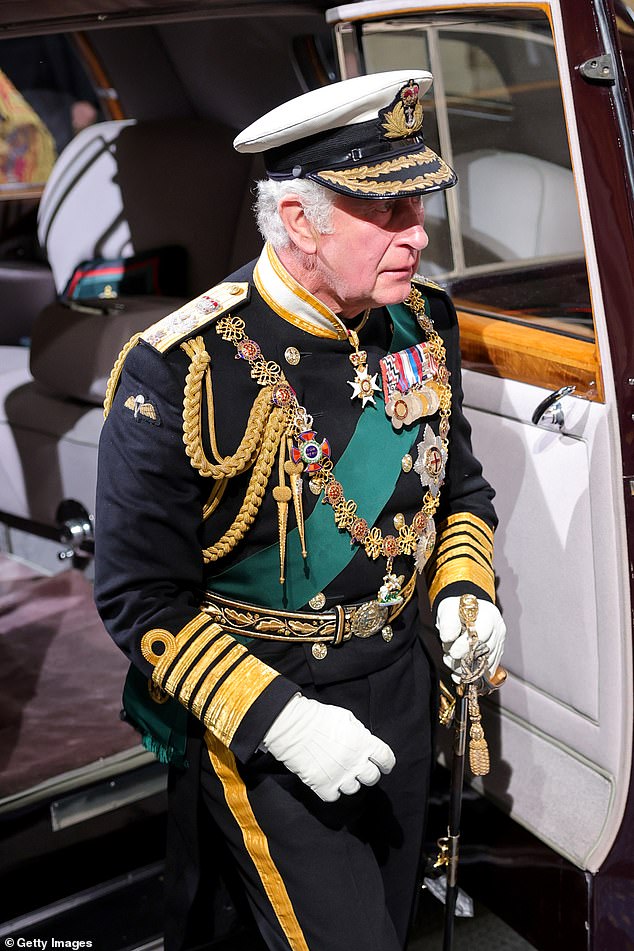 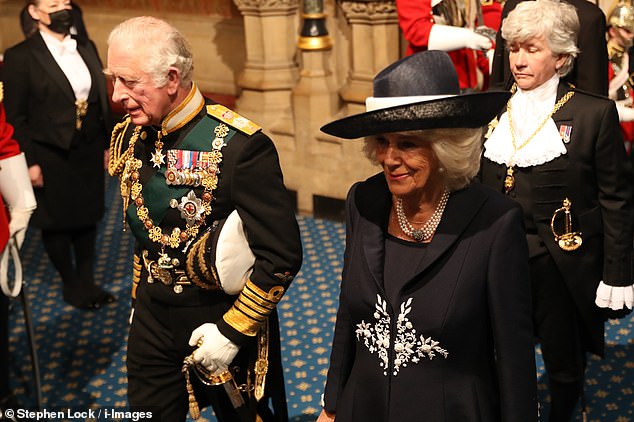 Prince Charles and Camilla, who was recently announced to be styled as Queen Consort when Charles ascends to the throne, arrive at Parliament

Speaking to MailOnline, Ms James explained: ‘For his first formal assumption of the Queen’s role Charles arrived full of what looked like bravado, using one hand to steer and direct his hosts and his rather anxious-looking wife into the building and smiling and chatting in the foyer.

‘Then came a moment when he seemed to steel himself to walk in his mother’s footsteps.

‘He breathed in air and he jutted his lower jaw with a small side-to-side wobble as though bracing himself for what was to come.

‘He barely, if ever, glanced at Camilla and his son William walked some paces behind him, emphasizing the air of this being a rather isolated appearance.

‘As he walked towards the arch leading to the throne room his head seemed to jerk up slightly as though just seeing either the room or the dais with the empty gap where his mother’s throne would be.

‘Taking his own “Consort” throne he sat with a confident enough leg splay but his eyes seemed to fix on the crown in front of him and his expression looked reflective.

‘It was when Charles read the Queen’s speech that his nervousness appeared more obvious.

‘The pages of the speech itself seemed to flap throughout and it appeared his hands were shaking.’

Both Prince William and his wife Camilla flanked the Prince of Wales as he delivered the speech from the consort’s throne in a major constitutional moment for the UK.

His mother’s larger throne was left poignantly empty nearby as power continues to slowly transition from Britain’s longest reigning monarch to her son and grandson.

Charles’ speech was drawn up by Boris Johnson and his No 10 team as the PM  battles to regain the political initiative after damaging rows over lockdown parties and the heavy losses suffered by the Tories in the local elections and left the Tories trailing Labour in national polls.

The Prince of Wales said the Government’s priority is to ‘grow and strengthen the economy and help ease the cost of living for families’.

‘My Government will level up opportunity in all parts of the country and support more people into work,’ he said.

Delivering the Queen’s Speech he promised that in the ‘challenging times’ the Government would continue to support the people of Ukraine.

Standing in for the Queen, Charles told Parliament: ‘Her Majesty’s Government will drive economic growth to improve living standards and fund sustainable investment in public services.