NSW Police investigators have taken a formal statement from a former boyfriend of the woman who accused federal cabinet minister Christian Porter of rape.

James Hooke, a senior managing director with Macquarie Group who has known Mr Porter and the accuser for decades, met with detectives twice in March and made a statement on the rape allegation after he released a statement publicly through the media. 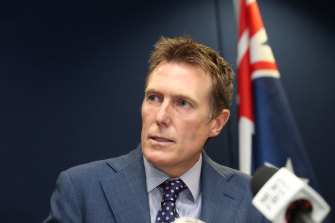 Police closed the investigation last year, citing a lack of admissible evidence, and it remains closed despite the statement provided by Mr Hooke, who described the woman as a “dear friend” in public comments last month.

The woman, who took her own life in June last year, accused Mr Porter of raping her at Sydney University when she was 16 and he was 17 in January 1988.

Mr Porter, who was moved out of the Attorney-General’s portfolio last month to be the Industry and Science Minister, strenuously denies the allegation and is suing the ABC for airing the claims.

“During this discussion Mr Hooke did not wish to discuss the allegations made by the victim but, rather, wanted to let investigators know that he understood why the investigation had been closed,” police said.

“Further, he rang to thank investigators for the support and respect that was shown to the victim.”

His subsequent statement to media outlets on March 12 contained information “investigators were not privy to” and he subsequently made his formal statement to police.

“This statement provided by Mr Hooke does not change the position of the NSW Police Force. The investigation remains closed.”

In the public statement, Mr Hooke said he had “clear recollections” of speaking to the woman about the allegation in the 1980s.

“I also have what I consider to be clear recollections of relevant discussions I had with Christian Porter from April 1992 and through the mid-1990s,” he said.

Police had been in contact with the woman in early 2020. On June 23, she told investigators she did not feel able to proceed with reporting the allegations. She died on June 24.

While police were aware of Mr Hooke from July, there was no direct contact between him and police until March.

Police said they had not taken a formal statement from Mr Hooke before closing the investigation because, ordinarily, the victim’s statement is the first one taken.

“When the victim informed investigators that she no longer felt able to proceed with the report no further witness statements were obtained,” police said.

Mr Hooke has said Mr Porter is “manifestly and appropriately entitled to the presumption of innocence” under criminal law but backs an investigation of the non-criminal aspects of the matter and said he was willing to provide information to an inquiry.

Mr Porter was moved to his new portfolio after launching defamation proceedings against the ABC and journalist Louise Milligan, who first published the rape allegation concerning an unnamed cabinet minister.

On March 3, when he identified himself as the cabinet minister, Mr Porter said that “no one in law enforcement or the law or politics or the media ever put any substance or any specific allegations to me at all” before the story was broken by the ABC.