Groups of officers roamed the city in teams of four to six, patrolling for signs of renewed protests, as construction workers put up traffic barriers and tradies huddled and sipped coffee in the city on a cold morning. 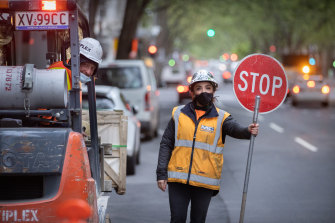 At 9am, there was no visible sign of further demonstrations. A small security team was stationed outside the CFMEU headquarters in Carlton, where union employees watched traffic enter the city from a balcony atop the building.

Protests involving hundreds of people erupted at the union’s offices on September 20, with protesters accusing the union of not pushing back hard enough against mandatory vaccinations for construction workers.

Later that day the state government announced the industry would shut for two weeks. The violent protests at the CFMEU’s office morphed, sparking several days of protests across Melbourne that led to takeovers of the West Gate Bridge and the Shrine of Remembrance.

On Tuesday morning a police spokesperson said officers would “continue to have a highly visible presence to ensure public safety and provide a swift response to any potential protest activity” breaching directions by the Chief Health Officer.

Callers to ABC Melbourne on Tuesday reported multiple incidents of construction workers in Melbourne not wearing face masks while on site, as they are required to.

Transport Infrastructure Minister Jacinta Allen said the vaccine rate for the 2000 construction workers on the Metro Tunnel project was 99 per cent, and the rate at a level crossing removal site was about 95 per cent.

Even though many builders are desperate to return to work, some sectors are experiencing project delays of up to a month because the construction shutdown affected secondary industries, such as materials manufacturing.

Ms Allan she said the closure disrupted the supply of many construction industry raw materials. 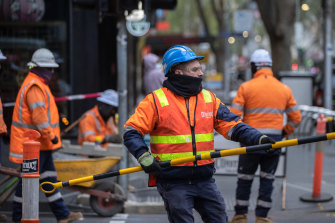 Construction workers erect barriers as they return to work in Melbourne’s CBD on Tuesday morning.Credit:Simon Schluter

“There’s no doubt that what was done in the last couple of weeks has caused destruction to the supply chain,” she said.

Jason Charles, of Charles Bros Building Contractors, said some of his projects were delayed by four weeks because of the backlog for construction materials following the shutdown.

He said door and window factories produced such a high volume of goods that their storage facilities quickly reached capacity when construction stopped, so producers were also forced to take two weeks off because they ran out of warehouse space to store the excess stock.

“People think we’re two weeks behind, but we have to wait for windows and doors to come in, so we’re more like four weeks behind,” he said. “I tell this to clients, and they say: ‘you’re f—ing joking aren’t you?’.”

Building workers who were not vaccinated were to be turned away from their jobs from Tuesday morning because the Victorian government ruled they must have at least one COVID-19 jab to return to work.

Elevate Building managing director Matt Mina said the hiatus gave some projects the opportunity to reset ahead of the busy season before Christmas.

“Everyone’s very well excited to get back into it. There’s a lot more hoops to jump through, so people are a little apprehensive. That has made our job a bit more difficult, but we’re getting on with it,” he said.

Although some people were wary of all the rules placed on construction projects after the protests, Mr Mina suspected most demonstrators returned to work.

“My personal view is that if they want to protest that’s their prerogative, but their voice has been heard. Some of the restrictions were made more manageable, but I think their voices were heard,” he said. 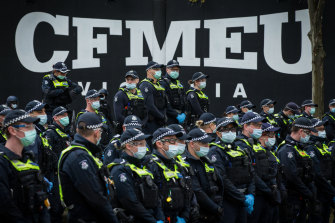 The government ruled large-scale building sites could have up to 25 per cent of workers on site from Tuesday, and allowed lunchrooms to be open “with strict density requirements and additional ventilation”. It’s earlier decision to close lunchrooms sparked controversy.

Employers must request from workers proof of their vaccination status before allowing them to work, or they must provide a medical exemption.

“Please note that medical exemptions are expected to be rare and should be scrutinised carefully,” Master Builders Victoria recently told its members.

Large building sites will be allowed to return to full production when 70 per cent of the state’s eligible population is double-dose vaccinated.