Two police officers and their force’s lawyer have been cleared of perverting the course of justice over the Hillsborough tragedy – despite a judge finding they had changed their statements on what happened.

After four weeks of evidence, lawyers for three had applied to have the case against them dismissed.

The three men were each accused of two counts of doing acts tending and intended to pervert the course of justice and it was alleged they were involved in a process of amending officers’ statements to minimise the blame on South Yorkshire Police following the disaster at the FA Cup semi-final on April 15 1989, in which 96 Liverpool fans died.

In a ruling handed down at the Nightingale court at the Lowry Theatre in Salford today, judge Mr Justice William Davis said the statements had been changed.

But he added that because it was for a public enquiry – not a legal court case – their alterations had not thwarted justice.

It prompted disgust from families of the victims who shouted ‘The law is so wrong’ and a loaded statement from the CPS admitted: ‘What has been heard here in this court will have been surprising to many. That a publicly funded authority can lawfully withhold information from a public inquiry charged with finding out why 96 people died at a football match, in order to ensure that it never happened again – or that a solicitor can advise such a withholding, without sanction of any sort, may be a matter which should be subject to scrutiny.’

Mr Justice Davis said there was no case fit for consideration by the jury based on any of the six counts on the indictment. 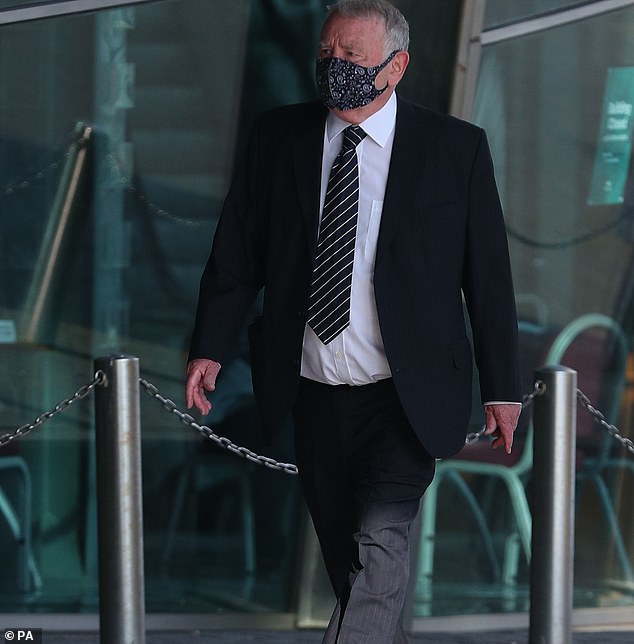 Former lawyer Peter Metcalf, 71, outside the Lowry Theatre in Salford for the opening of their trial

In the ruling, he said: ‘I repeat my observation about the anxiety and distress being felt by the families of those affected by the Hillsborough disaster.

‘These proceedings have been very drawn-out following a lengthy trial process involving the match commander.

‘I know the strength of feeling there was after his acquittal. I am aware that these proceedings also have been observed with interest.

‘However, whatever the anxiety and distress, I have to determine whether there is evidence to support the particular criminal offence with which these defendants have been charged.

‘In concluding that there is not, that is all I do.’

The trial had heard statements were amended to remove criticism of the force.

But expert witness Sir Robert Francis QC told the jury there was no legal duty of candour for police at a public inquiry. 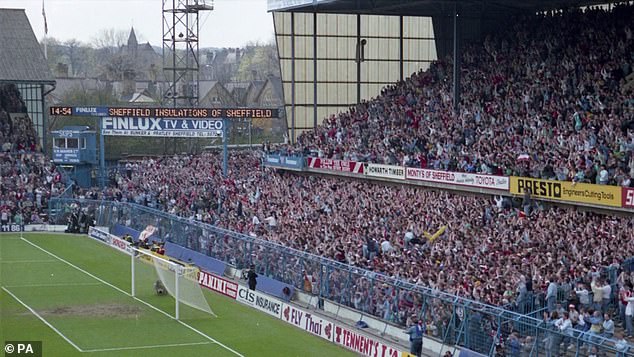 The West Terrace of Hillsborough stadium at 2.54pm, which was shown to members of the jury 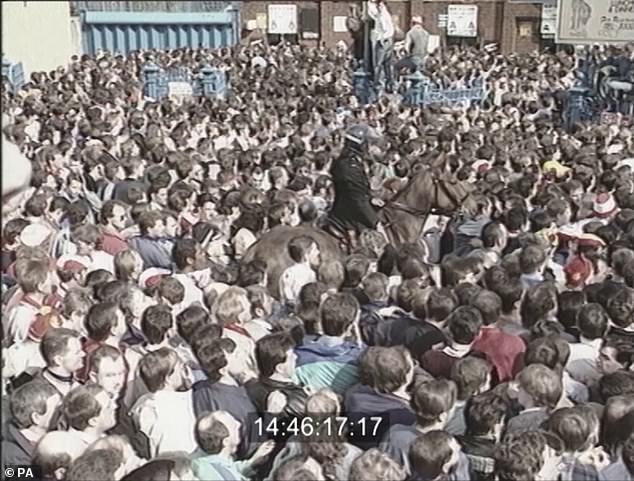 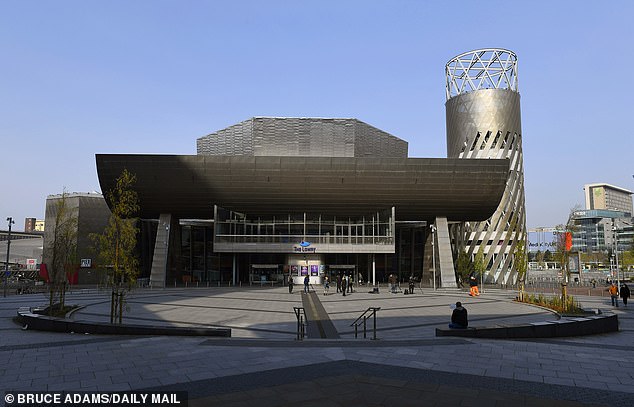 Mr Denton, Mr Metcalf and Mr Foster were charged in 2017 following an investigation by the Independent Office for Police Conduct (IOPC) into allegations of a cover-up by police following the tragedy.

Sir Norman Bettison, a chief inspector in 1989 who went on to become chief constable of Merseyside and West Yorkshire, was charged with misconduct in a public office as part of the investigation but the charges against were dropped in August 2018.

The match commander on the day, David Duckenfield, was charged with gross negligence manslaughter in 2017 but he was cleared in 2019 at a retrial, after the jury in his first trial was unable to reach a verdict.

In May 2019, former Sheffield Wednesday club secretary Graham Mackrell was fined £6,500 and ordered to pay £5,000 costs after he was convicted of failing to ensure the health and safety of fans arriving at the ground on the day of the disaster.

Sue Hemming, CPS Director of Legal Services, said: ‘Words cannot describe the sheer devastation of the Hillsborough disaster and the impact on the family and friends of the 96 who died, and hundreds more who were injured.

‘Previously the Taylor Inquiry, the Popper Inquest, the Stuart Smith Inquiry, a private prosecution, the Hillsborough Independent Panel process, a new inquest and two further criminal trials have all examined what happened at the Hillsborough Stadium on April 15, 1989.

‘The appalling events of that day have also overshadowed the lives of the families and friends of all those who died. They live with their grief to this day. They have faced untrue allegations about the behaviour of Liverpool fans that they were complicit in causing those deaths. The true causes of the disaster have been examined in subsequent proceedings and fan behaviour was firmly eliminated as a cause. They were football fans simply attending a football game to support their team. Their loved ones were unlawfully killed through the negligence of others.

‘Since 2013 we have worked closely with the Independent Office for Police Conduct (IOPC) to establish whether there was sufficient evidence to bring prosecutions against a number of individuals for offences committed before the day of the match, on the day of the match or in the aftermath.

‘This is the first time that people have appeared in court for actions following the disaster. It has been a complex case looking at evidence from three decades ago and whether the defendants deliberately changed police statements in order to mislead future inquiries.

‘It is crucial that we presented the evidence gathered by the IOPC investigation teams to a court and we have worked tirelessly to prepare the case for the jury to understand this evidence and any implications resulting from the amended statements.

‘After long and incredibly careful consideration, especially for the families involved, we decided not to appeal the ruling. The CPS was right to bring this case and for a court to hear the evidence of what happened in the aftermath of the Hillsborough disaster.

‘What has been heard here in this court will have been surprising to many. That a publicly funded authority can lawfully withhold information from a public inquiry charged with finding out why 96 people died at a football match, in order to ensure that it never happened again – or that a solicitor can advise such a withholding, without sanction of any sort, may be a matter which should be subject to scrutiny.

‘Throughout, we have kept in regular contact with bereaved families and I fully appreciate how disappointing this outcome will be for them. As we have done at each stage of our work, we will meet with them again to answer any questions they may have.’