Plastic screens installed on shop counters and supermarket checkouts to stop the spread of coronavirus could be causing more harm than good, according to ventilation experts.

Some shop owners have recently uninstalled the clear barriers after discovering they made it difficult for customers to communicate with staff and led to people shunning social distancing requirements. 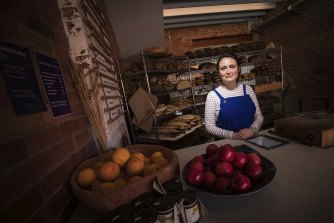 Baker Bleu co-owner Mia Russell installed plastic screens at her Caulfield North bakery to protect staff and customers. But she recently removed the barriers because she was concerned it was making it hard for people to communicate.Credit:Darrian Traynor

Professor Jason Monty, head of mechanical engineering at the University of Melbourne, said the screens could disrupt the airflow of a space and lead to “stagnation regions” where the virus lingered.

He said shops hurriedly rolled out the screens at the beginning of the pandemic because it was believed at the time that coronavirus was primarily spread by droplets emitted by people coughing and sneezing.

“We now know that the primary transmission route is the smaller particles that easily get around those barriers,” he said. “Get rid of the plastic shields. If everyone is wearing a mask they are a total waste of time.” 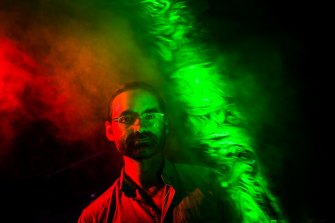 Professor Geoff Hanmer, a ventilation expert and architect from the University of Adelaide, said screens were likely causing “more harm than good”.

“Anything that creates stagnant pockets of air, whether it is a screen or furniture, is not helpful to making sure spaces are properly ventilated,” he said.

“We are trying to dilute people’s breath so there is less chance they will be infected. It’s bad when you have staff together, behind a wall of screens, because if one person is infected, the others will become infected.”

Lidia Morawska, a Queensland University of Technology aerosol scientist and director of the WHO-collaborating International Laboratory for Air Quality and Health, said while plastic barriers prevented the transmission of large COVID-19 particles – or droplets – between staff and customers, they did nothing to stop the flow of much smaller particles. 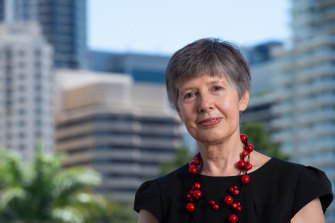 These tiny particles are considered the main source of COVID-19 transmission and can pose a risk to anyone indoors, regardless of their proximity to others.

“I wouldn’t recommend putting these barriers in, without a full understanding of what they do to airflow and the potential accumulation of the virus in the enclosed areas,” Distinguished Professor Morawska said.

Melbourne bakery Baker Bleu recently removed its two perspex screens, which cost $360, after noticing they were making it difficult for customers to communicate with staff and leading to poor social distancing.

“When people came in they didn’t like talking through the screens,” co-owner Mia Russell said.

“Customers came closer together in the unshielded part so they could talk to staff, which was the opposite of what we wanted to achieve.”

On windy days, the bakery had to close its door, restricting ventilation, because staff were worried the screens would blow over.

Last week the bakery opened a new store in Prahran, which has foregone plastic shields in favour of COVID-19 safe measures such as deep counters and two separate points of sale.

“We have a lot of staff and we want to keep the community safe. We have had to learn as we go,” Ms Russell said.

But Valerio Domenici, who runs the Zucchero Caffe Bar in Artarmon in Sydney’s north-west, has decided to make his two plastic screens a permanent fixture, even once restrictions ease. 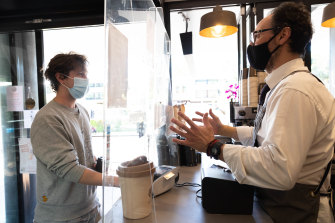 Valerio Domenici serves a customer from behind a perspex screen in his cafe, Zuchero Caffe, in Artarmon, Sydney.Credit:Janie Barrett

“I have it for protection … people feel comfortable in coming into a cafe that is actually doing the right thing.”

Mr Domenici doesn’t have any concerns about ventilation as a result of his screens, but acknowledges it may be an issue for other businesses. “I’ve got all the windows, the hallway is open, I’ve got great flow and I also have my big airconditioning unit,” he said.

He said customers had stopped putting their bags onto his counters since the protective barriers had gone up.

While major UK supermarkets are reportedly set to remove their plastic screens and are considering a bulk recycling program, the barriers are set to remain in Australian supermarkets. 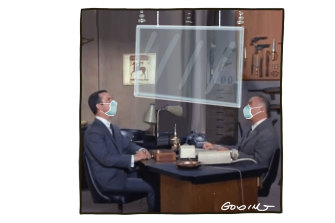 A Coles spokesperson said its screens were installed in 2020 as an additional COVID-safe measure, in line with health directions.

“We don’t intend to remove these unless health directions change,” she said.

A Woolworths spokesman said its screens provided an additional safeguard for staff and customers and remained a part of its COVID-safe plans.

The federal government currently advises that it is not necessary to install screens between workers and customers.

But Safe Work Australia said screens could be considered in situations where workers were in proximity to each other for lengthy periods. “For example, a perspex screen could be considered where two workers work side by side or back to back for a shift,” its website reads.

Infectious diseases physician Michelle Ananda-Rajah, who is running as a candidate for Labor in the federal seat of Higgins, said retailers would be better off installing air purifiers and carbon dioxide monitoring devices to show customers how well ventilated their stores were.

“We need to be cleaning the air,” she said.