This is the terrifying moment a flower pot tumbles off a tall block of residential flats in eastern China before exploding just feet away from a little girl.

The footage shows the girl looking up quizzically as the ceramic pot comes crashing down, shattering violently next to her.

The CCTV video, filmed in the city of Wuhu in Anhui Province on October 6, shows two plant pots tumbling from the roof of a 34-storey building.

One of the two pots hits a porch roof, but the other comes close to seriously injuring or even killing the little girl who is walking below. 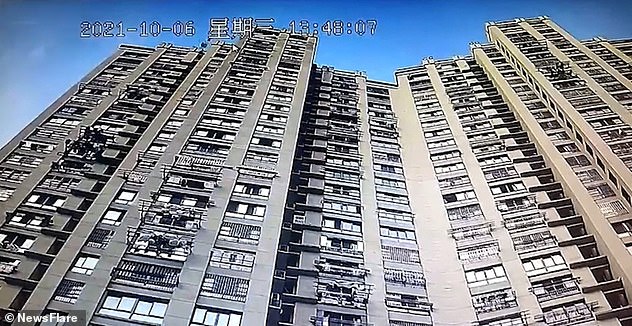 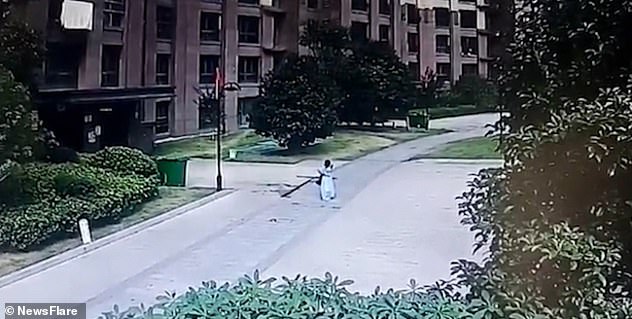 A little girl, dressed in white and wearing a black handbag, notices some commotion above. She remains rooted to the spot, staring quizzically upwards 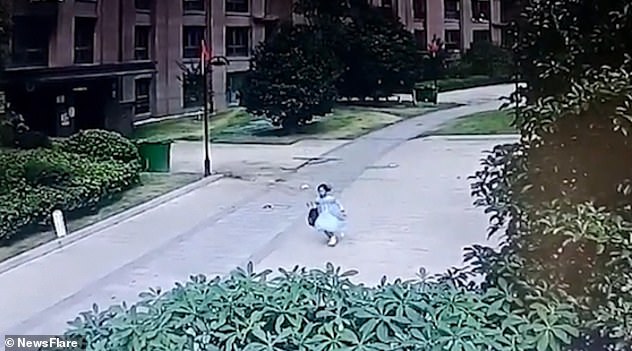 After one of the two pots explodes only feet away from her head, the little girl breaks into a sprint, terrified by what has just unfolded

The girl, wearing a white dress with a black handbag over her shoulder, sets off running after the near-death experience.

Her parents reported the incident to police.

The incident from eastern China closely mirrors a near-death experience captured on a car dashcam in Hawick in the Scottish Borders in April.

A loose chimney toppled off a roof and fell through a rear window of a Mercedes car, narrowly missing the passengers inside.

Steven and Sharon Lothian were shocked when the stack smashed through their car while they were parked up on Hawick High Street.

The 44-year-old’s rear dashcam managed to capture the stone falling from the top of the Burton and Dorothy Perkins clothing store building.

In the video, the rear bonnet pops up automatically as Steven was just about to leave to grab something from the boot.

As it does this, the car violently shakes and a terrified Sharon can be heard shouting: ‘What the f***!’

After a few seconds of silence, she continues: ‘What the hell was that?!’

Subsequent images taken by Steven show the damage caused by the loose stonework with the rear window of his black Mercedes completely ruined.

Steven said: ‘I went out for some shopping and I had just parked up.

‘Opened the automatic boot about to get out and it came crashing down. ‘Five seconds later I would be where it landed.’

He continued: ‘I’m waiting on insurance coming back to me. They said it will affect my no claims and the price will go up even though it’s not my fault because no-one else was involved.’