London: Pestering women in the street or in pubs and making lewd comments towards them could become an offence under plans to criminalise “public sexual harassment” that will be announced in Britain next week.

A government-commissioned review of hate crimes will call for aggressive sexual behaviour and inciting hatred against women to be made criminal offences as part of an overhaul of laws to protect women and girls against violence.

The review by the Law Commission – the body responsible for framing hundreds of the UK’s laws – will reject demands for misogyny to be made a hate crime, having determined it would be ineffective, according to government sources. 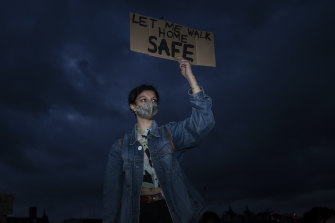 British women have been demanding greater safeguards against harassment and menacing behaviour since Sarah Everard was murdered by a police officer while walking home at night. Credit:Getty Images Europe

Draft legislation prepared by campaigners covers behaviour including intentionally pressing against someone on public transport, persistent sexual propositioning or cornering someone, making sexually explicit comments, leering at a person and cat-calling.

It makes clear that police and prosecutors would have to show the behaviour would cause “harassment, distress or alarm” with an intent to “humiliate or degrade” a victim.

A government source who did not have clearance to speak on the record said: “The Law Commission is not going to class misogyny as a hate crime because it would be ineffective and in some cases counterproductive. But it will call for a public sexual harassment offence which doesn’t currently exist.

“It thinks this fits with other work the Government is doing on criminalising intimate image abuse and will be more productive and better in protecting women.”

The Law Commission review of hate crimes was ordered three years ago by Sajid Javid, then home secretary, but has since been thrust centre stage by the backlash over violence against women prompted by the kidnap, rape and murder of Sarah Everard by a serving Metropolitan Police officer.

The commission will propose a new offence of public sexual harassment as a more effective way of protecting women against violence than classing misogyny as a hate crime alongside disparaging comments about race, religion, sexual orientation, disability or transgender identity.

In the wake of Everard’s killing, ministers said they would consider if there should be a new offence of street harassment that would criminalise explicit sexual and abusive behaviour or comments against women or men in public.

She said verbal or physical abuse of women in the street were not “low-level” crimes and could lead to more serious offences. Everard’s killer had previously escaped prosecution for alleged flashing offences.

Dr Charlotte Proudman, a barrister who helped draft the proposed bill, said it would also have to be in the public interest to prosecute: “It could be someone shouting degrading, humiliating comments with lewd language to a woman walking down the street that makes them feel unsafe.

“If someone came up to you in a pub, didn’t leave you alone, made foul comments about your body, and was persistently following you around, maybe that would be captured.” It is understood that ministers are in favour of the new offences proposed by the Law Commission, as long as it can be shown that they plug gaps in current laws for common assault and public order breaches.

Recommendations made by the commission are generally accepted by the Government.

Nimco Ali, the feminist campaigner advising the Government on its violence against women strategy, said new legislation was needed to show such behaviour was unacceptable.

“It’s like seat belt laws or the smoking ban. In order for social norms to change, you have to have legislation and then society will police it,” she said.

The decision not to make misogyny a hate crime is likely to face a backlash from women’s groups, however, as it would have enabled police and prosecutors to ask for tougher sentences for some crimes against women.

However, the commission decided it could make it harder to prosecute crimes such as domestic abuse and would create two-tier sentencing depending on whether a sexual offence was shown to be a hate crime.

The commission is also expected to propose extending the offence of “stirring up hatred” to include provoking violence on the grounds of gender, partly in response to the Incel movement – involuntarily celibate men, some of whom have been responsible for violent and fatal attacks on women.

It will also strengthen protections for freedom of speech so that offensive dinner table comments made in private are not classed as hate crimes.