Home » World News » One of 11 charged with murdering teen pleads not guilty, committed to trial

One of the 11 people charged with murdering 15-year-old Solomone Taufeulungaki has pleaded not guilty and been committed to stand trial.

Taataa Tafa, 20, is one of two men charged over Solomone's death, along with nine boys aged between 13 and 17. On Wednesday he pleaded not guilty to murder, affray and two counts of committing violent disorder. 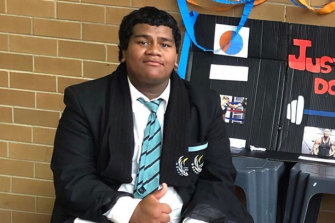 Solomone was stabbed to death in a June 16 brawl outside the Brimbank Shopping Centre in Deer Park in Melbourne's west.

Mr Tafa waived his right to a pre-trial hearing and his lawyer, Emma Turnbull, told Melbourne Magistrates Court her client wanted his case transferred to the Supreme Court sooner rather than later, to secure a directions hearing this year.

"We are going there, we may as well go there now, is our position," Ms Turnbull said of the application to fast-track her client's case to the higher court.

Prosecutors wanted Mr Tafa's case adjourned to give more time to the other accused people to decide if they want to proceed to trial. It was the preference of prosecutors to have the group committed to trial together. 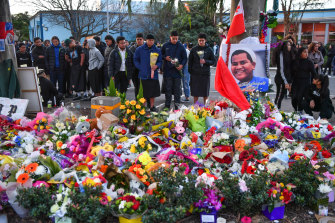 However, magistrate Kieran Gilligan allowed Mr Tafa to enter his plea in order to appear at a directions hearing in the Supreme Court on December 14.

The other man charged, 23-year-old Soreysa Jibrael, appeared briefly before the court and his lawyer, Erin Byrt, said he would also likely plead not guilty to murder and other charges. But Mr Jibrael's case was adjourned for two weeks.

The nine boys, who cannot be named, are due to appear before a children's court next week.

Eight of the boys have been granted bail. Their lawyers indicated during recent bail applications their clients would also plead not guilty and go to trial.

The ages of the boys and the expected long wait before they face trial – up to two years – were factors in the decision of Supreme Court judge Justice Paul Coghlan to grant them bail.

Mr Tafa, Mr Jibrael and one boy remain in custody.