Washington: US President Donald Trump had made American "energy dominance" a key part of his platform for reelection. But a plunge in the price of oil threatens to undermine that 2020 message.

The price of crude took one of its most dramatic drops in history on Monday after Saudi Arabia opened the spigots on its massive oil reserve amid a price war with Russia.

The result wiped out of hundreds of billions of dollars in market value for the US oil and gas industry – and dragged down the rest of the US economy with it. 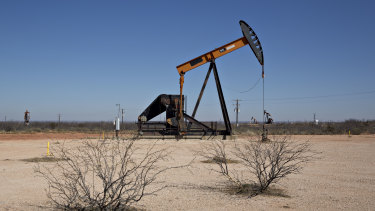 A pumpjack operates on an oil well in the Permian Basin near Crane, Texas.Credit:Bloomberg

That's bad news for Trump, who is trying to reassure voters in key swing states that produce oil and gas – Colorado, Pennsylvania and Texas – that he is the best person to shepherd the US economy for the next four years.

Trump has gone from touting the economy as "the best it's ever been," to attempting to minimise the effects as the coronavirus spreads throughout the US and markets tank on it.

A big part of the "energy dominance" agenda Trump touts on the campaign trail is making sure US oil and gas exports grow. But the country's role as an energy exporter is jeopardised by the glut of oil now on the market, as well as depressed demand as the coronavirus shock winds its way through the world economy. 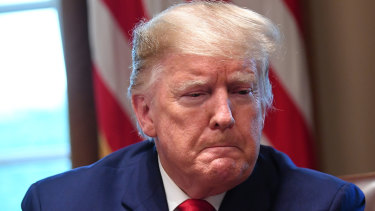 US President Donald Trump: great plans for US energy independence under threat. Credit:UPI/Bloomberg

"If the Saudi-Russia oil price war persists," said Jason Bordoff, founding director of Columbia University's Centre for Global Energy Policy, "it will cause widespread bankruptcies through the shale patch and steep declines in US oil output, which would cause net oil imports in the US to start rising again."

And it's yet another remarkable consequence of the rapidly spreading coronavirus that the Trump administration is struggling to contain.

The whole thing kicked off halfway around the world, due mostly to something beyond the White House's control.

An uneasy oil-production alliance between the Saudis and Russians broke down over the weekend after Moscow refused to cut its oil output.

The kingdom wanted to work with the Russians to prop up the price per barrel as energy demand weakens because of the viral outbreak. When Russia refused, the Saudis decided to flood the market with oil themselves.

Things may get worse for US producers before they get better. Goldman Sachs warned that a price of $US20 per barrel on the international market may be a real possibility.

Trump tweeted through the maelstrom by emphasising just how cheap gasoline may get in the coming weeks. That's a 360 degree turn from celebrating the renaissance of energy producers who he falsely says made a remarkable comeback during his administration.

"Good for the consumer, gasoline prices coming down!" he wrote on Twitter. He also inexplicably tried to pin the oil plunge on the news media.

But low fuel prices aren't good for the overall US economy, according to Kevin Book, who manages research at ClearView Energy. That's because of the adverse effect the price drop will have on oil and gas firms.

The US oil and gas sector will have a harder selling its product abroad – and, Book said, may have "less of a dominant market share going forward."

That's not great news for the president trying to correct the US trade deficit. "Coronavirus was bad enough before this," Book added.