Thousands of Victorians with severe mental illness spent more than eight hours waiting in emergency departments before being admitted to a psychiatric care bed.

Mental Health Minister James Merlino conceded on Tuesday the wait times were “not good enough and Victorians deserve better” as new data showed the government had failed to meet its target of admitting 80 per cent of mental health patients within eight hours for the past six years. 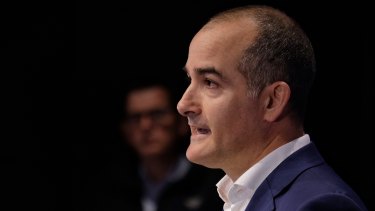 Government data shows Victoria fell well short of its own benchmark last financial year, with 46 per cent of patients forced to spend an entire work day waiting for proper care.

That equates to more than 6000 of the 13,312 Victorians battling severe mental illness who presented to emergency departments in a 12-month period.

“I have had to sit in the corridor of a hospital while my child is having a psychotic episode.”

For Melbourne mother Julie, who has been repeatedly forced to wait with her teenager in hospitals in Melbourne’s east and north-east, waiting hours in hospitals for appropriate care is “traumatic”.

“I have had to sit in the corridor of a hospital while my child is having a psychotic episode,” she said.

“Sometime my child is highly agitated and highly aggressive, and we just have to wait.”

“I am being put at risk, so is everyone else.”

During a recent trip to the emergency department as her daughter was suffering another psychotic episode, a man with back pain who had been waiting longer for help offered to give up his position to assist the family.

“He just stood up and said ‘won’t someone look after this child’,” Julie said.

According to the latest data release to Parliament’s public accounts and estimates committee, the Royal Melbourne Hospital was one of the worst performers, with just one-in-five patients admitted within the eight-hour timeframe.

At Monash Health’s three hospitals in Casey, Dandenong and Clayton, more than 68 per cent of severely ill mental health patients were still waiting for a bed after eight hours.

At Western Health, which manages three public hospitals in Footscray, Sunshine and Williamstown, just 23 per cent of patients had been admitted within the government’s own eight-hour benchmark.

The latest figures come before the release of the final report from the Royal Commission into Victoria’s Mental Health System.

“The interim recommendations of the royal commission included a number of initiatives that related specially to increasing the number of acute mental health beds available in Victoria,” he said.

“We have already started the work to deliver these and I know that is a priority as we work to meet growing demands across the state.”

“These figures only further illustrate just how far behind this government is in meeting its targets and delivering the level of care Victorians need and expect,” Ms Kealy said.

She accused the government of “kicking the can down the road” instead of urgently addressing the mental health system.

The COVID-19 pandemic and subsequent lockdowns to curb outbreaks of the virus have triggered a huge increase in demand for mental health services in Victoria and exposed cracks in the system.

Mental Health Victoria chief executive Angus Clelland said while the state’s mental health system was in crisis before the pandemic struck, it was a national problem that needed urgent attention.

“COVID-19 has created additional pressure on the system and has exacerbated access issues for people living with mental illness,” Mr Clelland said.

“Many people who are at risk are deemed too complex for general practice, but not sick enough to warrant hospital care.”

“These people cannot wait weeks or months for appointments with a psychiatrist or psychologist, or afford the Medicare gap payment. Emergency departments then become their only option.”

Mr Clelland said Victoria was not alone and the high demand for hospital beds was due to a historic lack of investment in community-based services by both the Commonwealth and successive state governments who share dual responsibility for the mental health system.