It’s 7pm on a weeknight and 13 blokes are talking raucously over beers at a Collingwood pub once frequented by standover man Mark Brandon “Chopper” Read.

Some wear black hoodies and scarves emblazoned with their logo – a tattoo parlour-style, circular image of a skull with a candle oozing over it. 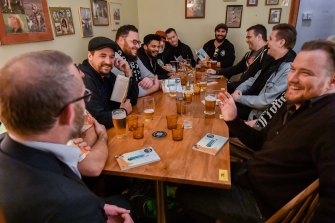 But this isn’t an outlaw motorcycle club meeting.

Welcome to the Tough Guy Book Club, whose members are more likely to be discussing Ernest Hemingway’s depiction of masculinity than terrorising neighbourhoods.

Since the Collingwood “chapter” kicked it all off eight years ago, Tough Guy Book Club has been wildly successful, expanding to 45 branches across Australia and even in New Zealand, Britain and the US.

It’s not just about books – at the start of each monthly session, this one held in Goldy’s Tavern, formerly the Leinster Arms pub, members take turns to talk about themselves. One shares his joy about a coming reunion with family in Queensland. Another has been told by his partner that he drinks too much. 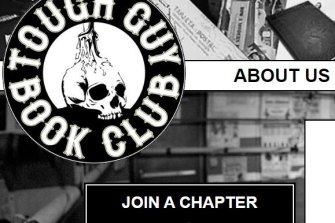 Founder Shay Leighton said the social side of the club is important.

He started the club at a low point. “I lost a couple of male friends to suicide and health concerns. I lost my business and my partner left, in a short time. I was in a terrible place.”

In order “to get me out of the house”, he would meet friend Tom Scott regularly at a Collingwood pub to talk about books. 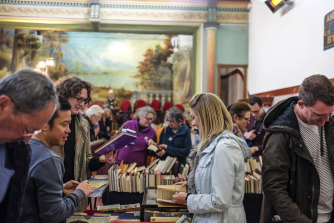 Clunes Booktown festival will be more low key than in previous years. This photo shows crowds at the 2018 event.Credit:Aldona Kmiec

Mr Leighton, who will speak about the club at the Clunes Booktown Festival, says it’s healthy for men to find an interest outside of work or home, and not everyone is into DIY or sports.

Tony Duras, 46, of Yarraville, said when he joined four years ago his hobbies – cooking and gardening – were “pretty solo activities”.

“This group gets me out of the house and connecting with other people. I’ve formed some really strong friendships. If I’ve had a tough day, I look forward to decompressing.”

In Australia, book clubs are seen as more for women. Mr Leighton attributes it to the “completely arbitrary” idea that it’s not cool for blokes to read.

“I disagree,” he said. “I don’t think there’s anything tough about being less informed than the person next to you, or having fewer ideas,” he said.

One rule is that members don’t talk about work. “Guys talk enough about what they do for a living.” On the first Wednesday of every month, members meet at their local pub to discuss a novel they have all read that month.

On May 29, at the 2021 Clunes Booktown festival, Mr Leighton will take part in a panel called The Good the Bad and the Ugly of Book Clubs, discussing what works and doesn’t.

One weekend of Booktown 2021 – May 29 and 30 – will explore book clubs, including appearances from writers Toni Jordan and Vikki Petraitis and State Library of Victoria chief executive Kate Torney.

The other Booktown weekend, May 1 and 2, is for author talks, including appearances from Garry Disher, Rosalie Ham, and Derryn Hinch.

A survey of more than 400 book clubs, to be released at Booktown, found that just 2.5 per cent were male-only.

Leslie Falkiner-Rose, a member of the board that runs Booktown, said Tough Guy Book Club’s success was extraordinary and with a smart website, the group was “beautifully-marketed”.

She said by meeting in pubs, and with a fun black and white theme, “they brought a whole new attitude to book clubs that clearly must be attractive to those who’ve joined”.

“It’s almost like a men’s shed for books. It has that sort of feel about it,” she said.

Ms Falkiner-Rose said the cancellation of last year’s Booktown, save for a few online events, was devastating for the small town of Clunes, north of Ballarat. Some of the town’s businesses said they used to reap 40 per cent of their annual income from the festival.

This year, entry to events, held at either Clunes Town Hall or the Free Lending Library, will be by pre-booked tickets only.

The retailing will be limited to existing traders and a few pop ups and there will be no stalls or performances along the main street.

A weekly read for book lovers from Jason Steger. Sign up to receive it every Friday.