Environmental disaster they WON’T be talking about at climate change summit in Glasgow: How Nicola Sturgeon’s SNP turned one of Britain’s greatest cities into a stinking dump infested with giant rats

When Joe Biden visits Glasgow for the United Nations Climate Change Conference in a few weeks, he will doubtless see the very best of a place once described as the Second City of the Empire’.

Perhaps he will marvel at the gleaming new buildings at the giant Scottish Event Campus exhibition centre, which includes an armadillo-shaped auditorium.

It’s possible he will take in the magnificence of Glasgow’s City Chambers, which are said to boast the second greatest amount of marble in a single building after the Vatican.

But if the US President would like a more accurate sense of the city that Glasgow is today, he should pay a visit to the reeking space below the junction of the M80 and M8 motorways, a short walk from the city centre.

For there, stretching out for an acre and in places at least 6ft deep, is an enormous pile of rubbish. And not just rubbish, but fly-tipping on an industrial scale.

Nothing could better capture the devastating irony: that a city hosting what is regarded as the world’s most important environmental conference, also known as COP26, is itself in the midst of an environmental crisis. 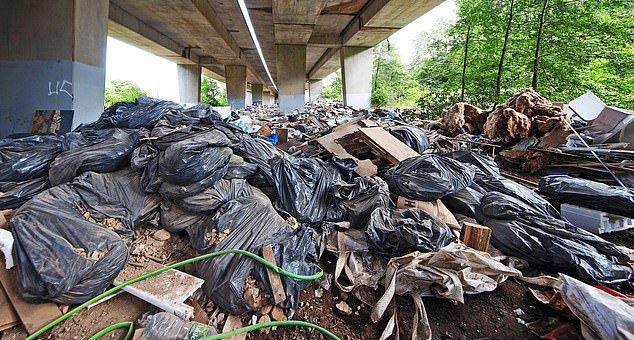 Glasgow, the city hosting a global environmental conference, also known as COP26, is itself in the midst of an environmental crisis. Pictured: Rubbish dumped under the M8

This vast mound of filth and junk is merely one symptom of how a proud and magnificent city has been left to rot, sometimes literally, by its woeful leaders from the Scottish National Party and a council that seemingly cares more about Scottish independence than the dull business of essential administration.

Once synonymous with the Labour Party, Glasgow is today an SNP stronghold. And the chaos unfolding is the sadly predictable result of what happens when a single-issue party suddenly finds itself in power.

While Scotland First Minister Nicola Sturgeon and the SNP leadership posture on the national stage – ‘banning’ nuclear submarines and trying to introduce a four-day week – the buildings owned by Glasgow’s SNP council are decaying, raw sewage courses through cellars, bins are not emptied for weeks and a plague of rats is hospitalising dustmen.

To cap it all, Glasgow is currently the eighth-highest Covid hotspot in Europe, has been found to be the deadliest place to work in the UK, and the difference in life expectancy between the richest and poorest in the city has recently been found to have increased by three years.

It’s a sad epithet for a city whose mighty buildings have often been compared to those in Manhattan, and whose people are among the most creative and hard-working in Britain.

After a hard-fought recovery from the collapse of industry and huge unemployment of recent decades, it appears Glasgow has been knocked down once again – and the blows raining down on it are being struck by its own elected leaders.

The first thing you notice about Glasgow is the niff.

Eva Murray, a city councillor who has lived in Glasgow all her life, says: ‘The other day, I was walking around the city centre, and I noticed that there was a genuine smell.

‘There’s just no doubt that the city is very dirty.

‘We are in the middle of a waste crisis and it’s important that people should know that – including all the world leaders and delegates that are coming to COP26.’

That word ‘crisis’ comes up repeatedly, no matter who you speak to.

‘There’s a complete denial by the SNP that the city is in crisis,’ he says. ‘I’ve never seen a decline this horrendous.

‘Over the past six to seven years, our budget has been obliterated. It’s a risk to public health and safety, and in the summer the city stinks. It’s actually embarrassing.’

Mr Mitchell provides figures that speak for themselves. 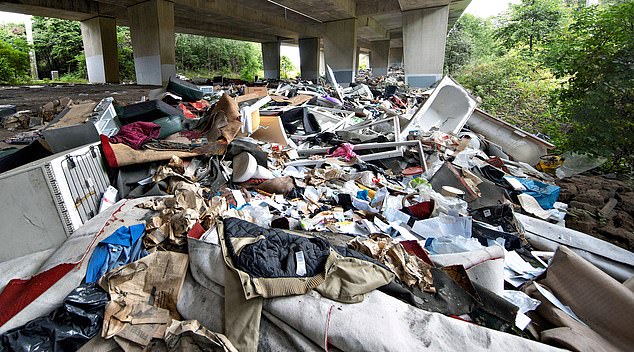 Below the junction of the M80 and M8 motorways, a short walk from the city centre there is, stretching out for an acre and in places at least 6ft deep, is a massive pile of rubbish (pictured)

‘The number of refuse collectors has gone down from 1,300 to 800. And the council often has to hire agency workers, who have no pensions, or don’t even know if they have a job at the end of the week.’

To encourage recycling – and doubtless to save money – the council has reduced bin collection to once every three weeks. In addition, it is charging £35 per item for disposing of bulk items such as pieces of furniture.

‘The rats are getting bigger and bolder as they have more rubbish to feed on,’ says Mr Mitchell, whose union has started a ‘rat register’ so the public can report sightings.

‘It was said that we had the fourth-biggest rat population in Britain, but I think we must be second or third by now.

‘I’ve had three members hospitalised by rat bites and scratches over the past three months, and there’s always the risk of contracting Weil’s disease from rats, which is no joke.’

Just a few hundred yards away from the waste depot in Kelvinhaugh where Mr Mitchell works, there is an alleyway between two smart tenement blocks where many of the bins are overflowing and where mattresses and broken bed frames have been dumped.

Little wonder, then, that Glasgow is a boomtown for rodents.

From January 2020 to March this year, more than 8,500 calls were made to the council’s pest control services in response to rats. The estimated cost of dealing with these cases is £800,000.

But the council is fighting a losing battle, as rats are still frequently spotted. Last week, a large pack of rats the size of rabbits were filmed just yards from a children’s play area in Alexandra Park.

One result of the crisis has been to create unusual bedfellows.

One of those working with Mr Mitchell is Thomas Kerr, who has been a Conservative councillor since 2017, when the SNP came to power in the city.

‘The leader of the council, Susan Aitken, doesn’t acknowledge that there is a problem,’ says Mr Kerr, adding that nearly every email he receives is about cleansing and fly-tipping.

‘There are lots of senior council officers who don’t actually live in Glasgow, and have this ivory tower mentality. As a result, you’ve now got this situation where the Tories are standing side-by-side with the GMB union.’

Mr Kerr has first-hand experience of how ineffective the council is at dealing with the problem.

‘A few weeks ago, I reported the number plate of someone who I saw fly-tipping,’ he says, ‘and I still haven’t heard back from the council if they’ve done anything. And I’m a councillor!

‘It’s no surprise that we’re the first city in Britain for fly-tipping – not such a great medal to show the world.’

Mr Kerr is also scathing about the state of the buildings the council either owns or controls.

‘Take a walk down any big street in Glasgow and look at the state of the older buildings,’ he says.

‘They’ve been neglected for years. There are far too many talking shops on the council and not enough is being done. There’s simply no strategic vision for the city, and the SNP are acting like they are still in opposition.’

One of the city centre’s most historic streets provides a depressing example of how neglectful the council is being.

In medieval times, High Street was one of Glasgow’s most important thoroughfares, but today it is a shadow of its former self, and a fading shadow at that, with many of its council-owned buildings suffering from rot, flooding and overflowing sewage.

Among those affected is Samantha Cooper, who owns a shop selling tarot cards and the like.

‘Historic rot is just eating this building,’ she says. ‘Sewage runs down the whole street, and it’s simply sluiced out every month.

Ms Cooper says the ceiling of the next-door shop collapsed through flooding. A similar fate was also met by a now abandoned sandwich shop, which had to be closed because it was flooded by, according to Ms Cooper, ‘thousands of gallons of sewage’.

‘What’s happening here is a microcosm of the whole city,’ she says. ‘There are lots of initiatives, but nothing actually happens.

‘There’s a huge cognitive dissonance going on, especially when you set this against the context of COP26. We’ve got tourists looking at all this and laughing. The council has failed us.’ 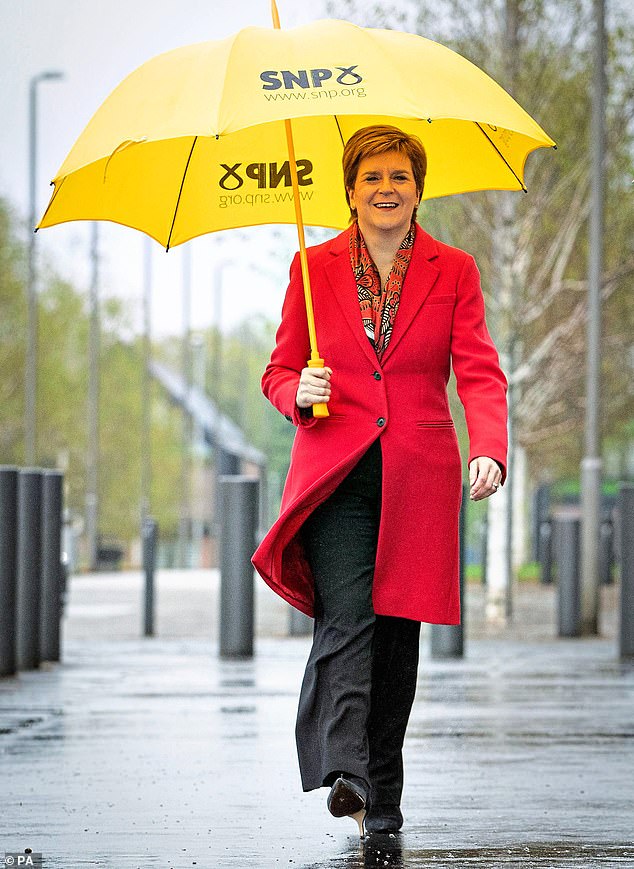 While Scotland First Minister Nicola Sturgeon (pictured) and the SNP leadership posture on the national stage, the buildings owned by Glasgow’s SNP council are decaying

High Street is not the only historic site in Glasgow that faces an uncertain future.

It is unclear what will happen to the shell of the iconic Glasgow School of Art, which was almost completely gutted by a fire in 2018. The investigation into the cause has still not been completed, nearly three years later.

And then there are the Grade A-listed Egyptian Halls on Union Street, that have been covered by scaffolding for over a decade and are at risk of being demolished.

So why is one of the greatest of British cities being so badly let down?

According to Paul Sweeney, the Labour MSP for the Glasgow region, it is because the SNP council is not standing up to the party’s leadership in Edinburgh and demanding an end to cuts.

‘Over the past few years, while the Scottish Government’s budget has increased, the funding for Glasgow City Council has been cut by 15 per cent,’ he says.

‘The council leadership is not standing up for Glaswegians and they are putting party interest before the city.

‘It’s a great tragedy, because Glasgow is one of the finest cities in the whole of Europe, and it has had a great renaissance with events like the Commonwealth Games and being the City of Culture.

‘It’s going to be an absolute embarrassment when we will shortly have world leaders stepping over bin bags and rats bigger than cats.’

Of course, it is likely that most of the COP26 delegates will spend much of their time in the immaculately clean and sterile conference centres and new hotel blocks, which could be on a different planet to the rest of the city. Joe Biden will be kept well away from rats.

There is talk of the city having a ‘deep clean’ before the conference, but that seems impossible.

Besides, as Thomas Kerr says: ‘Joe Biden is not more deserving of a clean Glasgow than those who actually live here.’

Meanwhile, the SNP is in denial.

In her view, Glasgow needs no more than a ‘spruce-up as we emerge from Covid’.

Ms Aitken may well regret her state of denial in May next year, in the next round of local elections.

With every opposition party campaigning to clean up Glasgow, some might feel it’s time the SNP was swept clean from office.