More than 200 Seattle police officers quit their jobs in the last year amid months of frequent anti-law enforcement, racial injustice protests and riots in the city.

Many of the officers cited an anti-police climate in the city – including in the City Council — and disagreements with police management in their reasons for moving on, leaving the department with what Police Chief Adrian Diaz called a “staffing crisis” on Tuesday.

He said 180 police officers quit last year and another 66 officers so far this year.

Some of the officers retired early while others took policing jobs in other cities or moved on to other careers, the officers said in exit interviews, according to KING-TV in Seattle.

Diaz said the number of officers left with the department is at “record” lows. “I have about 1,080 deployable officers,” he told KING. “This is the lowest I’ve seen our department.” 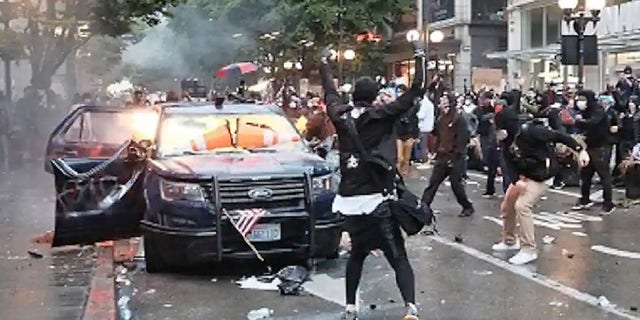 Kelly Thomas Jackson, 20, was sentenced to prison last month for allegedly throwing Molotov cocktails at two Seattle police vehicles during a May 30 protest that devolved into a riot.
(Department of Justice)

He said the department is hiring more community service and crime prevention officers to handle non-criminal calls but said that doesn’t make up for a lack of front-line officers.

“I’m hoping that it starts to level off,” he said. “I do see that this year we could have a significant amount of people leaving.”

Seattle Mayor Jenny Durkan’s office said in a statement: “Despite an increased focus on recruitment and retention, the Seattle Police Department continues to lose sworn officers at a record pace due to ongoing budget uncertainty,” an outcome which “Defund the Police” advocates see as success.

“Based on exit interviews, we know the Council’s threats of continued layoffs or cuts are having a direct impact on decisions to leave the department,” Durkan’s office continued.

The City Council is considering new cuts of $5.4 million to the police department’s budget. But Durkan is cautioning against additional cuts without addressing hiring and retention of officers.

Councilmember Lisa Herbold, chair of the Public Safety and Human Services Committee, said Tuesday that the council has fully funded the police department’s hiring plan for 2021, including money to hire 114 non-sworn employees who work to address public safety issues officers.

“The reductions being considered are from salary savings from officers leaving and do not reduce the number of officers SPD can hire,” she said.

Other cities like New York where anti-police protests have been prevalent have seen the same trend of officers leaving in large numbers.