Mexico, South Africa and Brazil could be taken off Covid red list while Thailand and Philippines stay in the balance as up to 18 countries may still suffer from strict travel restrictions

Red-list countries are ones the government says should be avoided ‘except in the most extreme of circumstances’.

If you have been to one in the last 10 days, you can only enter the UK if you are a UK or Irish national, or UK resident.

Regardless of your vaccination status, you must:

Mexico, South Africa and Brazil could be removed from the Covid red list today – but other popular destinations including Thailand are still in the balance.

There had been hopes ministers could dramatically slash the current total of 54 red list countries to fewer than 10, but a new analysis suggests 18 will remain.

Data expert Tim White predicted Mexico would reopen for quarantine-free travel from tomorrow thanks to a reduction in case numbers compared to last week and an apparent lack of variants.

Despite cases also dipping in Thailand, Mr White expects it will remain red due to the presence of the Beta variant, while he forecast the same for the Philippines because of its lack of genomic sequencing infrastructure.

Mr White also named South Africa as a likely candidate to move off the red list – removing the need for travellers arriving in England to pay £2,385 for hotel quarantine.

The country is currently welcoming visitors who have proof of a negative PCR within 72 hours of departure, while Mexico has no testing or quarantine requirements.

Brazil, meanwhile, requires anyone who has been in the UK within the last 14 days to quarantine for the same period upon arrival. It has suspended direct flights to and from the UK. 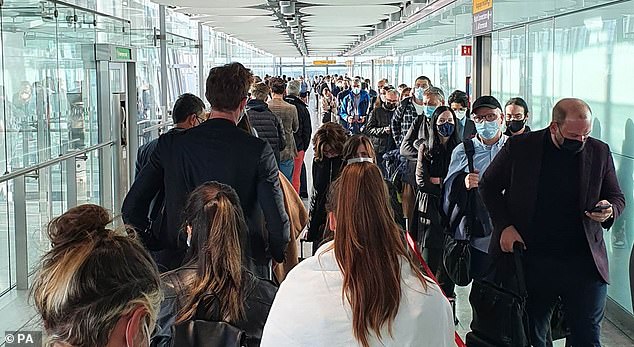 There are currently 54 countries on the red list, such as Mexico, Cuba, all of mainland South America, and southern and eastern Africa. Pictured, passengers queue for the arrival hall at Heathrow Airport’s Terminal 5 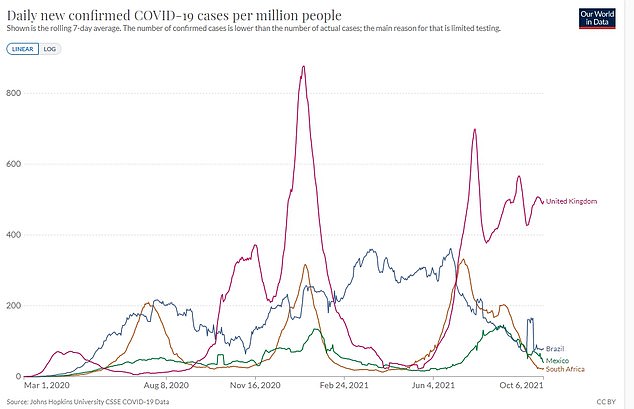 The UK Government’s ‘red list’ of 54 countries is tipped to be reduced to just nine. These are the countries currently on the red list:

A decision on which countries to remove from England’s red list is expected to be made today following a meeting of Government ministers.

The devolved administrations in Scotland, Wales and Northern Ireland set their own travel rules but have recently mirrored announcements made in Westminster.

Travellers who are not fully vaccinated must self-isolate at home for 10 days when arriving from a country not on the red list, but those who have been jabbed are exempt under new rules introduced this week.

The removal from the red list of Mexico and South Africa would send ‘a confidence boost across the sector and across consumers’, according to travel expert, Paul Charles of the PC Agency.

Mr Charles said it is ‘very hard to justify’ why any countries are on the list ‘when there are no new variants of concern there’.

He continued: ‘That’s why Ireland have removed every country from their red list because they see no threat. So the UK should be following that example.’

The London-based World Travel and Tourism Council, which represents private firms, said the sector’s recovery will continue to be ‘sluggish’ due to policies such as the UK’s red list.

The organisation predicted that travel and tourism’s contribution to global gross domestic product (GDP) is set to rise by less than a third in 2021.

However, Covid data analyst Tim White described reports that the list could be cut to just nine as ‘optimistic’.

The Government may use the travel update to confirm the date when fully vaccinated people arriving in England will be able to use a cheaper lateral flow test rather than a PCR version for their day-two test.

The Department for Transport said on Monday that this policy will be implemented ‘later in October’, adding that the Government ‘aims to have it in place for when people return from half-term breaks’.

Meanwhile, families may still be forced to spend £75 on PCR tests when returning from holidays this half-term, it was previously claimed. 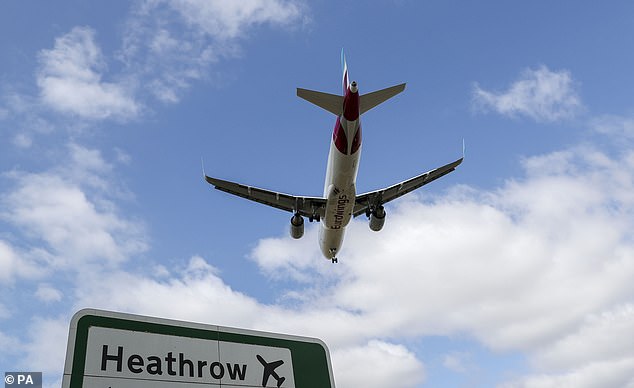 Anyone arriving in the UK from a location in the red tier must spend 11 nights in a quarantine hotel, which costs £2,285 for solo travellers (file image)

Families may still be forced to spend £75 on PCR tests when returning from holidays this half-term, it was claimed today.

The day two return swabs were supposed to be scrapped at the end of the month in favour of cheaper and quicker lateral flow tests for the fully vaccinated.

While the Government says it ‘aims’ to have it in place in time for half-term, a Cabinet source said ministers had been urged to keep the PCRs due to fears over variants.

The move would be a major blow for millions of holidaymakers and the beleaguered travel industry which would be aiming to recoup pandemic losses during half term.

‘There’s a very real chance PCRs will still have to be taken after half-term holidays,’ the source told The Sun. In a dig at Health Secretary Sajid Javid, they added: ‘Those who claim to be great unlockers have been captured quickly by the health officials.’

The day two return swabs were supposed to be scrapped at the end of the month in favour of cheaper and quicker lateral flow tests for the fully vaccinated.

While the Government says it ‘aims’ to have it in place in time for half-term, a Cabinet source said ministers had been urged to keep the PCRs due to fears over variants.

The move would be a major blow for millions of holidaymakers and the beleaguered travel industry which would be aiming to recoup pandemic losses during half term.

‘There’s a very real chance PCRs will still have to be taken after half-term holidays,’ the source told The Sun. In a dig at Health Secretary Sajid Javid, they added: ‘Those who claim to be great unlockers have been captured quickly by the health officials.’

But Department for Transport bosses told MailOnline categorically it would replace day two PCR tests with lateral flows by the end of October.

Mr Javid had doubled down on his commitment to scrap as many remaining Covid curbs as possible.

On his 100th day in the job, he told the Tory conference in Manchester that his party stood for ‘freeing things up’ rather than locking them down.

But Mr Javid is said to be concerned that relying on lateral flow tests – which unlike PCR don’t need to be verified in a lab – could encourage lying about positive results.

He has floated the idea of people taking their rapid test in a video call while supervised by a health professional, according to reports.

What are the simplified travel rules and what do they mean for holidaymakers?

Here is the new situation for those wanting to arrive from abroad:

The amber and green lists have gone. From October 4, countries and territories are categorised as either red or the rest of the world.

The red list currently consists of 54 places, including Thailand, Cuba and the Dominican Republic. The full list is on gov.uk.

There have been reports the number of red list countries could be slashed to nine later in the week, with destinations such as Brazil, Mexico and South Africa expected to be opened up to quarantine-free travel.

– What if I am arriving from a red list country?

People arriving from a red tier destination will still be required to spend 11 nights at a quarantine hotel, costing £2,285 for solo travellers.

– And what about those places not on the red list?

The latest change merges the amber and green list countries into a ‘rest of the world’ area, stripping back previous travel rules.

Passengers returning from non-red list locations do not have to quarantine at all.

– What was the system before?

A risk-based traffic light system determined the testing and quarantine requirements for arrivals into the UK, with countries sorted into green, amber and red categories.

– So what are the testing requirements now?

Fully vaccinated residents – and unvaccinated under 18s – from more than 50 countries and territories not on the red list can now enter England without needing to complete a pre-departure lateral flow test, take a day-eight post-arrival PCR test costing around £65, or self-isolate at home.

Instead, just a single day-two post-arrival test is required.

Under 11s were already exempt from pre-departure testing.

– What does fully vaccinated mean?

Passengers who have received a complete course of a vaccine authorised in the UK, or the EMA or Swissmedic in Europe, or the FDA in the United States are already recognised as being fully vaccinated.

The Government has further expanded the inbound vaccination policy to another 18 countries, including the United Arab Emirates, Japan and Canada.

– Are there other changes expected?

Yes. Later this month eligible fully vaccinated passengers with an approved vaccine and recognised certificate from a country not on the red list will be able to replace their day-two PCR test with a cheaper lateral flow test.

The change is aimed at reducing the cost of tests on arrival into England.

– When will this come into effect?

The Government said it aims to have this change in place for when people return from half-term breaks.

– What has been the reaction to the changes from the travel sector?

The easing of the quarantine and testing regulations has been welcomed by this sector, which has been hit hard during the pandemic.

Industry figures had previously accused the Government of being too slow to relax and simplify the rules for international travel.

Tim Alderslade, chief executive of Airlines UK, a trade body representing UK carriers, said things are ‘moving in the right direction’ and the changes ‘will make it easier and cheaper for people to travel’.

– What is the situation in Northern Ireland, Wales and Scotland?

Ministers at Stormont agreed the removal of the requirement for pre-departure testing for fully vaccinated arrivals from non-red list countries from October 4.

Travellers must book and pay for a day-two PCR test to be taken on or before day two following their arrival in Northern Ireland.

The Scottish Government had declined to change its testing regime, saying a pre-departure negative test would still be required and travellers from abroad who have been vaccinated still required to produce a negative PCR test on the second day after their arrival.

But it announced last month that after ‘liaising at length’ with stakeholders from the aviation sector, the Scottish Government had ‘reluctantly concluded that, for practical reasons, alignment with the UK is the best option’, meaning pre-departure tests are not required and that it also intends to ‘align with the UK post-arrival testing regime’.

Wales First Minister Mark Drakeford accused the Westminster Government of risking the health of the country by scrapping day-two PCR tests, urging a a ‘more precautionary approach’ to prevent new strains of coronavirus from entering the country.