London: When Meghan Markle entered the royal family less than two years ago, she made no secret of her ambition to put feminism front and centre of her public work.

As she stepped out for her final solo job as "Her Royal Highness", the Duchess of Sussex used her last royal platform to urge the next generation to look past race and gender to "speak up for what is right". 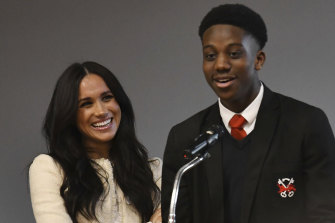 Meghan, Duchess of Sussex, smiles as head boy Aker Okoye, speaks in a school assembly, during her surprise visit to the Robert Clack Upper School in Dagenham, in east London, to celebrate International Women’s Day.Credit:AP

Appearing at a school in Dagenham, Essex, alongside one of the women who fought at the picket line for equal pay, she urged teenage boys to "appreciate and protect" the women in their lives in a rallying speech for International Women's Day.

The Duchess, who greeted 700 stunned pupils in assembly, said young men should make sure their mothers, sisters and girlfriends are "feeling valued and safe" as she asked them to set a good example for "some men who are not seeing it the same way".

In an unannounced visit to Robert Clack Upper School, Meghan told pupils: "No matter how small you might feel… No matter what colour you are, no matter what gender you are, you have a voice and you have the right to speak up for what is right." 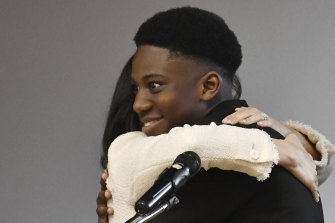 Going "off the cuff" in a school assembly, she invited one "brave young man" from her audience to go up to the stage to speak about why International Women's Day was important to him.

Aker Okoye, 16, took on the challenge, kissing Meghan on the cheek as he took to the podium and leaving her wagging her finger in mock disapproval as he told his school friends: "She really is beautiful, innit."

It was her final solo engagement before she leaves the working royal family, and was designed to showcase her favourite themes of women's empowerment and education. Watching a debating class and a lesson on female poets, she disclosed she had wanted to spend her International Women's Day event with the next generation.

Meeting Geraldine Dear, one of the women who took part in the 1984 strike for equal pay at the Ford factory in Dagenham, Meghan told her: "Well done on making such an important change for this country. I'm sure it's not easy… but it's the right thing to do."

Speaking of how motherhood had changed her life, she also disclosed that Archie, 10 months, is nearly walking. 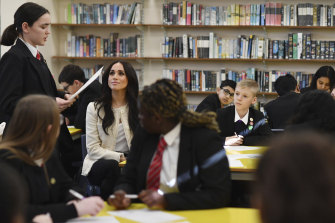 Meghan listens to a student reciting a poem to pupils at the Robert Clack Upper School. Credit:AP

In assembly, Meghan took to the microphone to speak without notes.

"When we thought about what I wanted to do for International Women's Day this year, for me it was incredibly important to be with the women of our future. And that is all of you young women here as well as you young men who play a very large part in this."

In words that some observers will find hard to separate from the Duchess's relationship with the men in her own life, and her decision to leave the royal family, she said: "I just encourage and empower each of you to really stand in your truth, to stand for what is right."

Prince Harry and Meghan later received a standing ovation at the Royal Albert Hall as they attended one of their final public engagements before they step back as senior royals.

The couple arrived in matching red outfits for the Mountbatten Festival of Music, the duke wearing a Royal Marines officer's mess jacket and Meghan a red dress by London-based fashion label Safiyaa.

Harry is Captain General of the Royal Marines and the couple were greeted warmly when they arrived at the venue in South Kensington.

The couple then received a long round of applause and a standing ovation from the audience as they took their seats in the royal box.

The couple will step down as senior royals on March 31 but have carried out a series of engagements over the past few days.