Britain’s Covid bounceback: Manufacturing sector grows at fastest rate for a DECADE after Rishi Sunak says he is ‘confident’ about recovery

Hopes were fuelled that the UK can roar back from coronavirus today as figures showed the manufacturing sector growing at its fastest rate for a decade.

The closely-watched PMI from IHS Markit/CIPS recorded a score of 58.9 – with anything above 50 representing expansion.

It was the highest number since February 2011, while business optimism was also at a seven-year peak.

The strong showing came after Rishi Sunak insisted he is ‘confident’ the country is well placed to recover from the brutal impact of the pandemic, with the vaccine rollout going at pace and restrictions starting to ease.

Yesterday the ONS issued revised GDP data showing that the downturn was even worse last Spring than previously thought – but the economy clawed back ground quicker than estimated. 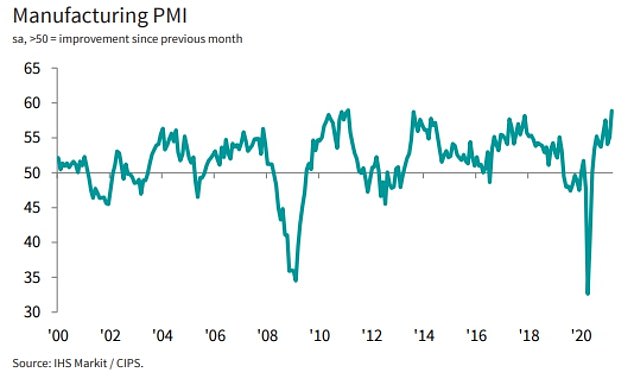 The closely-watched PMI index from IHS Markit/CIPS recorded a score of 58.9 – with anything above 50 representing expansion 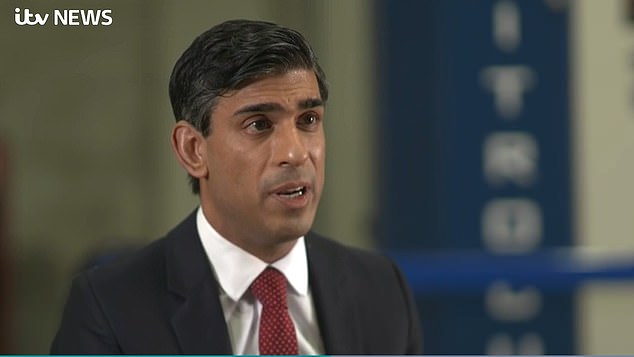 However, the rapid growth is putting strain on supply chains, with logistics issues leading to delivery delays.

Overall manufacturing output also increased for the 10th successive month, and at the quickest pace since last November, including consumer goods production, which had shrunk during the previous two months.

Bosses reported an increase in orders as non-essential retailers and the hospitality sector gear up to welcome back customers as lockdown restrictions ease.

Some also saw an increase in orders from customers keen to buy stock now to avoid disappointment due to future supply-chain disruption or potentially higher costs.

Inflationary issues are also starting to hit the sector – with the extra costs being passed on to customers – as output charges rose at the quickest pace since January 2017.

All the extra business did help boost employment in the sector, with jobs growth hitting a seven-year high, supported by the sharpest rise in backlogs of work for 11 years.

Rob Dobson, director at IHS Markit, which compiles the survey, said: ‘The domestic market remained the prime source of new orders, as companies reported that the vaccine rollout and clients’ preparations for the loosening of lockdown restrictions underpinned the expansion.

He added: ‘Weak export sales and supply-chain issues are likely to remain constraints on growth moving forward, however, with shipping issues already leading to severe disruption to production schedules, raw material availability and the onward distribution of finished products to clients, especially abroad.’

Duncan Brock, group director at the Chartered Institute of Procurement & Supply (CIPS), said: ‘All in all, a great end to the first quarter where some businesses recovered losses from last year, but the reality of continued supply chain disruption as a result of Covid, Brexit and now the Suez delays could potentially rein back some of the gains in April.’ 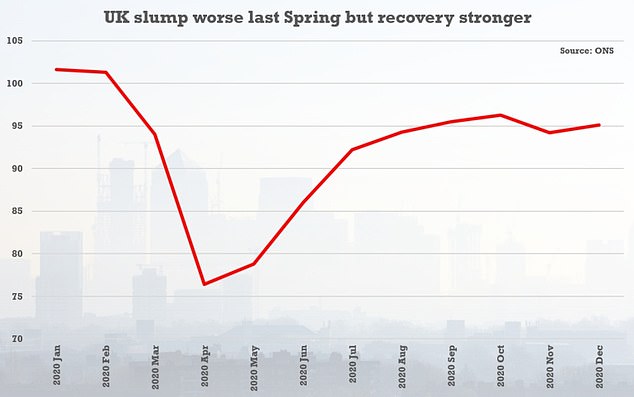 Revised GDP figures yesterday show a plunge of 19.5 per cent in the second quarter of last year, during the first brutal lockdown. But the economy clawed back ground more quickly than previously estimated 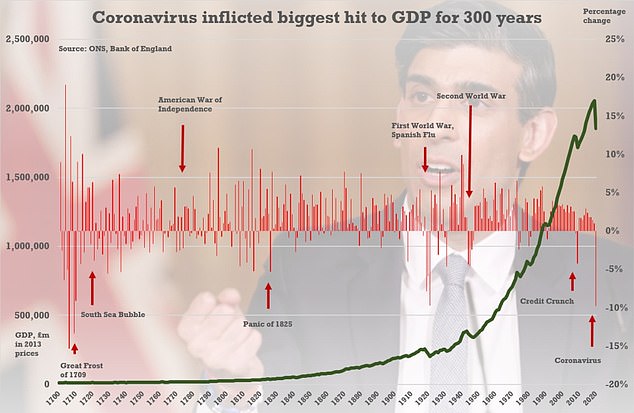 The revised 9.8 per cent recession in 2020 still made it the worst downturn in 300 years