A man appeared to make his two young children pose for a photograph on top a 150ft cliffs edge, known for being unstable, yesterday.

In a series of unsettling shots, the man can be seen positioning his children on the edge of the sheer drop at West Bay, Dorset – prone to rock falls.

The young girl, who appears to be no older than eight, dangled her legs off the cliff edge, while an even younger looking boy faced the camera phone the man was pointing at them. 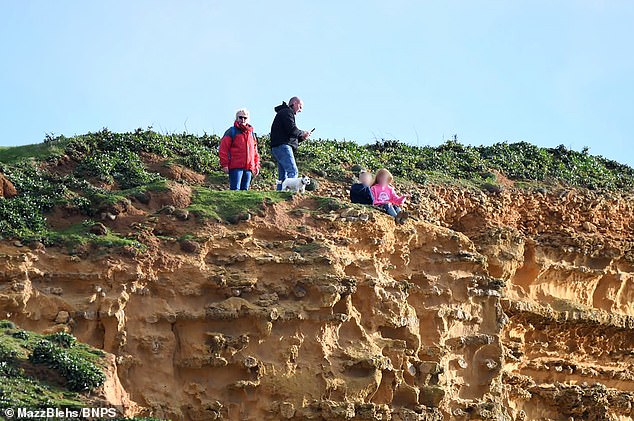 A man was seen taking pictures of two young children dangerously close to the edge of the cliff edge at West Bay, Dorset 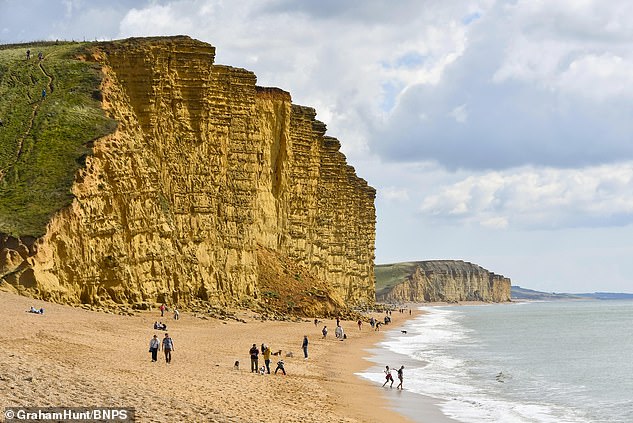 The West Bay cliffs, which featured in the ITV production Broadchurch, are known for landslips 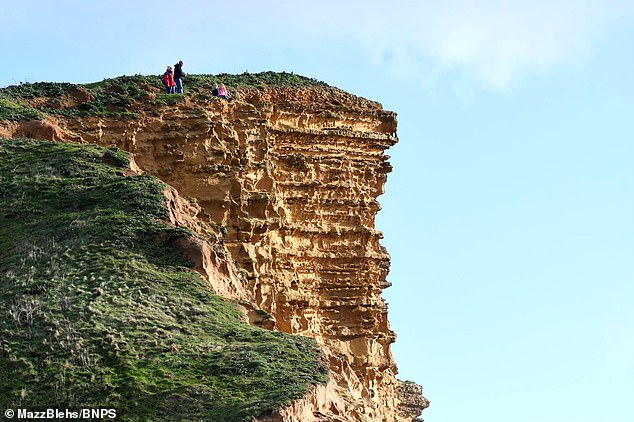 The group, who are then joined by someone in a red jacket, stand startlingly close to the edge of the 150ft cliff face

Pulling out his mobile, the man wearing a hoodie and a pair of jeans appeared to take a picture of the young pair.

At one point another person, wearing a red jacket, stands with the group observing them taking the risky snap.

The man ignored warning signs erected by the coastguard and local council urging the public not to stand too close to the cliff edge.

In 2012 tourist Charlotte Blackman, 22, was crushed to death when a huge landslip occurred as she walked under the cliffs further along the Jurassic Coast World Heritage Site at Burton Bradstock.

There was a major 800 tonne rockfall a bit further along the Jurassic Coast at Burton Bradstock in August. 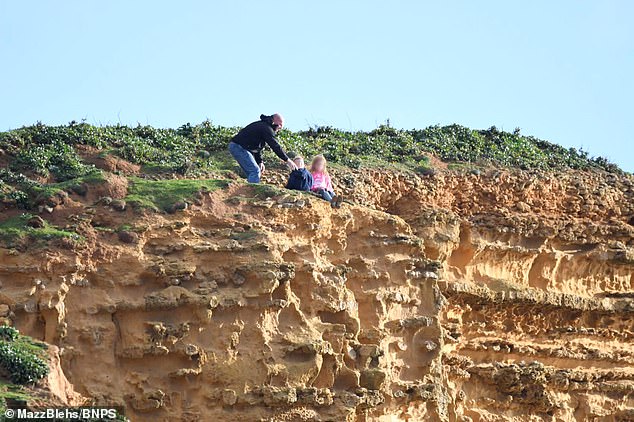 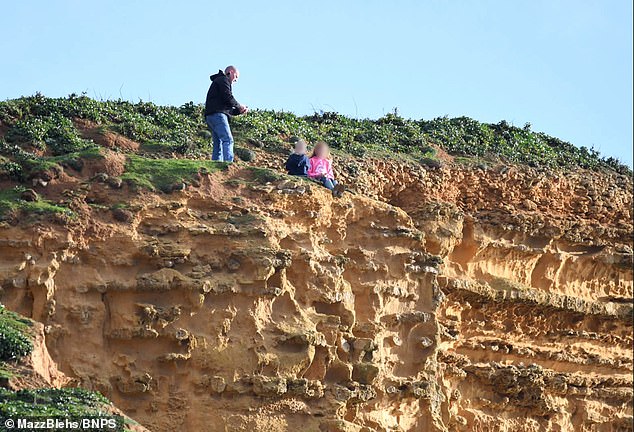 Mazz Blehs, 57, a landlady from Bournemouth who was on a day out with her husband, said: ‘My husband spotted them first with his binoculars and said ‘look at that’.

‘I couldn’t believe it. The man positioned the young girl and boy on the cliff edge for the photo. She even had her feet dangling over the edge.

‘I think the girl must have been seven or eight years old but the boy looked about three.

‘It was so dangerous I felt ill looking at it. There have been rockfalls lately and I feared the worst.

‘After he took the photo they went before anyone had the chance to approach them.

‘The man should really have known better and there are signs up telling people to stay away from the cliffs. I was shocked.’

But the incident does not appear to have put people off as hoards head to the area every year. 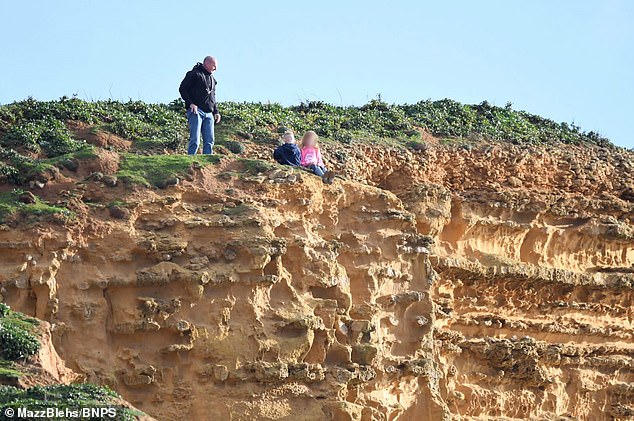 Despite the area being known for his unstable cliff face, the group still risked standing close to the edge 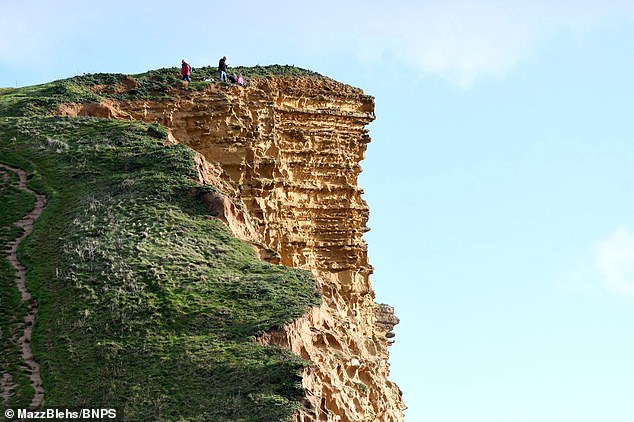 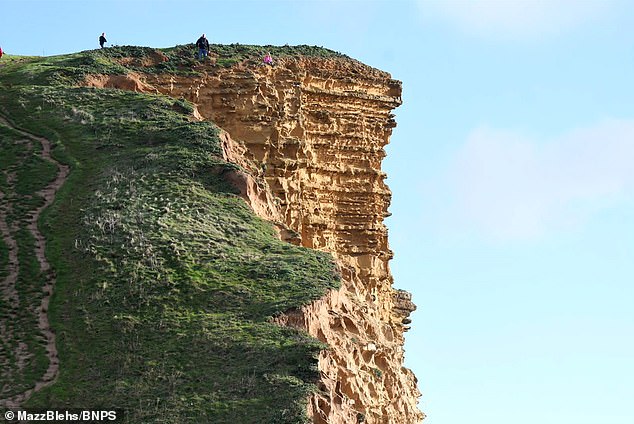 The cliffs, pictured today with the group on the edge, have seen several devastating landslips in recent years

In 2017 a large chunk of the South West Coast Path at the top of the East Cliff tumbled to the ground.

Around 2,000 tonnes of rock careered from the 150ft cliff and despite warnings from the UK coastguard, people still flocked to the beauty spot, which featured in the ITV crime drama Broadchurch, during the hot weather.

They were pictured standing close to where the slip had taken place and some were seen walking up the rubble from the landslip to get photographs.

On several occasions the West Bay coastguard has warned that people are putting their lives at risk by standing close to the edge.

Speaking today, Jake Lanning, deputy station officer for the West Bay Coastguard said: ‘The Jurassic Coast is a beautiful place to come and visit and we understand the desire to want to capture that picture perfect moment.

‘We have seen many instances over the years of individuals and families putting themselves at needless risk trying to take that perfect photo but these images represent one of the most severe examples. 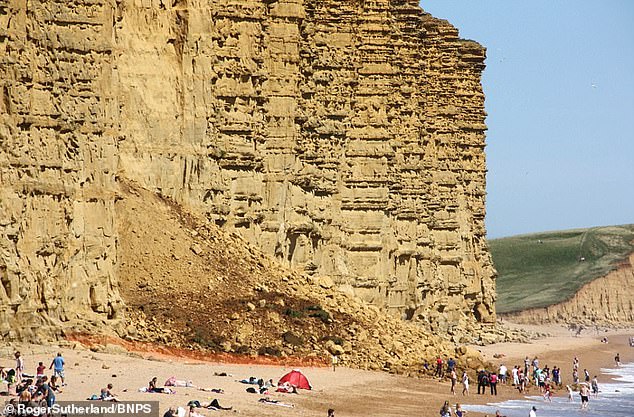 In 2017 lots of tourists still flocked to the popular beauty spot despite a concerning landslip which saw 2,000 tonnes of rock tumble into the bay (pictured in 2017) 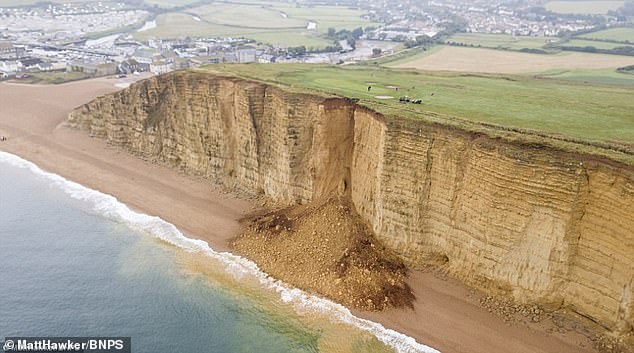 At the time, people were pictured standing close to where the slip (pictured) had taken place and some were seen walking up the rubble from the landslip to get photographs

‘You have to ask the question: ‘What photograph is worth risking your life, or the lives of yours loved ones?’

‘Our advice remains very simple. Stay well away from the edge of the cliff, keep your loved ones close and your dogs on a lead. Make sensible decisions and take home only happy memories.

‘If you find yourself in difficulty or if you see something that gives you cause for concern then do not hesitate. Dial 999 and ask for the coastguard.’