A police car was stolen, a man left stabbed, several cars smashed and police officers bitten by police dogs during a young man’s rampage across Melbourne’s north on Saturday night.

Police have said it was a miracle that nobody died during the series of incidents including a 27-year-old Mickleham man speeding at up to 200km/h in a stolen police car through residential streets. 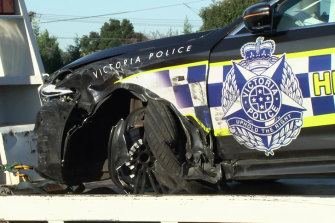 Superintendent Nigel Howard said the crime cavalcade began when the Mickleham man went to a home in Bells Avenue in Kalkallo and slashed the tyres of a car belonging to a 26-year-old Nine News reports was his own brother.

The car’s owner came out to confront the man, and was stabbed four times in the abdomen and fell down in the street outside the house.

The man armed with the knife then chased the victim’s partner into the house where the victim’s young daughter was.

“She shut the front door, and [the offender] tried to gain access,” said Superintendent Howard. 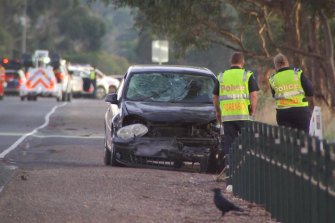 Another car that was damaged during the incident.Credit:ABC

“[He has] then continued in a southerly direction along Mickleham Road towards the city. [At] the same time a passing motorist stopped, had seen what was going on and offered some assistance to our police members and they continued to follow the police car at a safe speed and calling on their portable radios, where they are going and what the police vehicles doing.”

Multiple police cars were sent to intercept the car, and a police helicopter followed it overhead as it sped at up to 200km/h towards the Hume Highway and Sydney Road in Campbellfield.

“They’re the sorts of speeds that we see on racetracks, we don’t expect to see those speeds on the open road,” said Superintendent Howard.

The car sped down Sydney Road and then slammed into three cars that had stopped at the Barry Road traffic lights.

“Thankfully, there was no serious injuries out of that,” Superintendent Howard said.

The driver then got out of the smashed police car “waving a knife at members of the public” and ran on foot towards nearby Stewart Grove.

Police in cars, on foot and the canine unit chased the man into the street and the man was eventually knocked to the ground by a police car. But the drama did not end there.

“The offender wasn’t detained straight away, so we had to go hands-on and whilst going hands-on two of our members were bitten by one of our own dogs sustaining minor injuries,” Superintendent Howard said.

“It was a very, very dynamic incident, particularly the last 30 minutes from about quarter to one in the morning to quarter past one.”

The 26-year-old Kalkallo stabbing victim remained at Royal Melbourne Hospital in a critical condition on Sunday and was undergoing surgery for life-threatening injuries.

One police officer who was bitten by the police dog was also undergoing surgery for their injuries. One of the drivers of the stationary cars hit at the traffic lights was taken to hospital for a check-up.

Despite the stabbing, the damage to the police car and other cars and the dog-biting incident, Superintendent Howard said the night’s events “could have been a lot worse”.

“It is outrageous and it is offending that we’re starting to see now particularly with some of the speeds that we’ve seen in other incidents in recent times with cars,” he said. “As I say, thankfully no one else was killed or seriously injured as a result of it.”

When asked whether police should have shot the offender before he stole the highway patrol car, Superintendent Howard said it was a “very, very dynamic situation”.

“I think it’s a situation that we’re placed in on many occasions. And you know, it’s a difficult decision to make,” he said.

“From our perspective [the ordeal] ended, I think in the best way possible,”

“You can repair cars, replace cars… but to replace a human life, I think is just … enormous.”

The 27-year-old remained in custody on Sunday afternoon and was set to be charged with a number of offences, the main being offences related to the stabbing.

Any witnesses, or anyone with dashcam or CCTV footage is urged to contact Crime Stoppers on 1800 333 000 or make a confidential report at www.crimestoppersvic.com.au