A man has been charged after two women were killed in a crash involving a semi-trailer in Victoria’s west on Tuesday afternoon.

The semi-trailer was travelling north along the Western Highway near Laharum, about 40 kilometres south of Horsham, when it crashed into the rear of a Holden sedan turning into a rest stop about 12.20pm, Victoria Police allege. 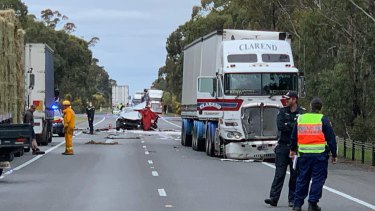 The scene of the crash near Horsham on Tuesday that left two women dead. Credit:Nine News

The car was allegedly pushed into oncoming traffic and collided with the passenger side of another vehicle, a Toyota sedan, which was travelling in the opposite direction.

The female driver, a 71-year-old from Horsham, of the oncoming car and the female passenger, 42 from Ararat, of the turning car died at the scene. The 36-year-old male driver of the turning vehicle, from Black Range, sustained life-threatening injuries.

He was flown to Royal Melbourne Hospital, where police said he remains in a critical but stable condition.

The driver of the truck, a 48-year-old Dartmoor man who was uninjured in the crash, was arrested at the scene on Tuesday. 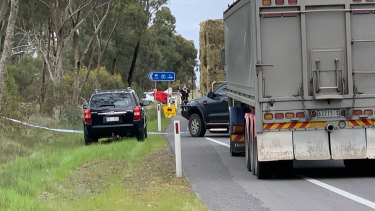 Emergency crews were called to the scene about 12.20pm on Tuesday. Credit:Nine News

He was bailed to face Horsham Magistrates’ Court on January 31, 2022.

The Western Highway was closed for most of Tuesday as detectives from the major collision investigation unit examined the crash scene.

Tuesday’s fatalities took the 2021 death toll on Victoria’s roads to 161.

Anyone who witnessed the crash or has dashcam footage of the incident is urged to contact Crime Stoppers on 1800 333 000, or submit an online report via its website.

Our Breaking News Alert will notify you of significant breaking news when it happens. Get it here.