Up to a third of the people deemed at risk of contracting COVID-19 at major exposure sites in Victoria have not yet been tested prompting concern from a leading epidemiologist that movements of positive cases may be going untraced.

More than 19,000 Victorians are now in strict two-week quarantine because they attended exposure sites or mingled with infected people or their contacts. But the only legal requirement on them is that they have a negative test on day 13, which, if negative, allows them to be released from quarantine. For some that is their first test.

“By day 13 it’s too late and that’s how you miss hidden chains of transmission,” said Deakin University’s chair of epidemiology Catherine Bennett.

Those in isolation include about 6000 patrons at AAMI Park and the MCG, where authorities believe outdoor transmission occurred. Of the 3500 patrons now isolating after the AFL match on July 10, 74 per cent have returned a negative test. And from 2648 close contacts from the rugby match at AAMI on July 13, 67 per cent have tested negative.

About 25 per cent of people who viewed the European Championship football final at the Crafty Squire in the CBD on July 12 have also not returned a test.

Professor Bennett said it was “quite extraordinary” people were not required to get a test soon after being placed into quarantine.

“It’s a major weakness,” she said, adding that it appeared testing rates had plateaued among contacts at the sporting events.

Victoria recorded 26 new locally acquired cases on Thursday, all but two of whom had been isolating while infectious. There are now 133 cases in the outbreak. Sixteen of the positive cases were partially vaccinated and five were fully vaccinated.

Health Minister Martin Foley said the percentage of Victorians who had been in isolation for their entire infectious period had jumped from 6 per cent to 92 per cent in three days, reducing the risk of ongoing community transmission.

Also yesterday the Therapeutic Goods Administration announced that two more people had died after being diagnosed with the rare blood clotting disorder associated with the AstraZeneca vaccine, bringing to five the number of deaths so far.

A 48-year-old woman from Victoria and a 44-year-old man from Tasmania died in the last week after receiving the first dose of the vaccine. Both had confirmed cases of the rare condition thrombosis with thrombocytopenia syndrome (TTS).

NSW on Thursday recorded its highest daily numbers in the current outbreak, with 124 new locally acquired cases. Premier Gladys Berejiklian warned the state needed to brace itself “for cases to go up even higher”.

In Melbourne, Prahran Market was closed and 900 people sent to quarantine on Thursday after one of the two new cases who were infectious in the community visited the market on Saturday morning.

The case, a patron at AAMI Park, tested negative and was released from tier two isolation but was forced back into quarantine when his entrance gate at AAMI was reclassified as tier one. He then tested positive. 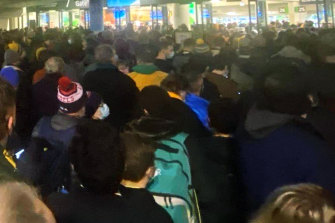 The other person infectious in the community received notification they were a close contact while they were in East Gippsland. They made one stop at a highway service station on their way back to Melbourne to isolate and were praised by authorities for disinfecting their credit card.

COVID-19 commander Jeroen Weimar said contract tracers were making 5000 daily calls to people in isolation, urging them to get tested in order to close off the outbreaks.

“We know who these people are … We continue to chase them,” he said. “It’s entirely possible people would have been put off maybe two or three days ago by long testing queues.”

He confirmed people were not legally obliged to get a test at the beginning of their isolation period.

“Some people choose to wait for that day 13 test, but you have to clear the day 13 test before you can be released from isolation and that’s a pretty big incentive to get a day 13 test done.”

Mr Weimar said he was encouraged that around 80 per cent of contacts in the school clusters have been tested. Mr Weimar hoped the number of people from exposure sites would rise in coming days as pending results were finalised and more people were tested.

But Professor Bennett said it was crucial that contact tracers knew as early as possible whether a person was infected so they could chase down their movements and determine if they had spread the virus.

This was particularly important in situations when the transmission event, such as the rugby of AFL matches, occurred days prior to the lockdown beginning, she said. Early testing became less important as the lockdown progressed because fewer cases had spent any time in the community.

Professor Bennett said the government should be able to mandate testing in the same way it mandated self-isolation.

Unlikely mandating vaccination, she said forcing people to be tested did not open them up to any adverse consequences. Authorities could offer at-home testing to high-risk contacts, or saliva or rapid tests to people who were reluctant to have a nasal swab.

Associate Professor Hassan Vally from La Trobe University said he had assumed close contacts were mandated to get a test and supported incentives to ensure they did.

“If you’re blind to that status of close contacts right up until day 13, that’s a bit of information that could be really useful,” he said.

The number of exposure sites continued to grow, reaching almost 400.

A staff member at Casey Hospital in Melbourne’s outer south-east tested positive on Tuesday. They worked one day while infectious but wore PPE and didn’t interact with patients. Monash Health has furloughed 41 staff.

Residential aged care facility Mecwacare John Atchison Centre in Hoppers Crossing is also on high alert, after a resident came back from Werribee Mercy Hospital potentially infected with coronavirus. A spokeswoman said residents and staff were immediately placed into isolation as a precaution, and staff were wearing full PPE.