Confusion and uncertainty greeted Italy's far-reaching measures to contain the coronavirus outbreak on Sunday after the government failed to fully communicate exactly how measures to isolate the northern region of Lombardy would be enforced. 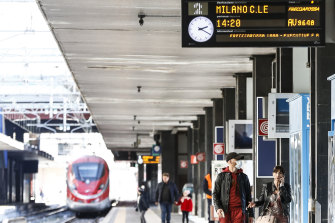 Trains were still leaving Milan for Rome and other destinations across Italy on Sunday.Credit:LaPresse via AP

However it remains to be seen whether Italian society will accept the quarantine, and what the long-term impact will be.

Quarantines can help slow down the peak of an outbreak and relieve pressure on healthcare, said Thomas Frieden, a former director of the US Centres for Disease Control and Prevention. Just as important, though, is getting society to buy into such actions, he said.

"It's crucial – for both ethical and practical reasons – that communities are engaged and supported," he said. "Otherwise communities will have higher costs and the effectiveness will be lower." 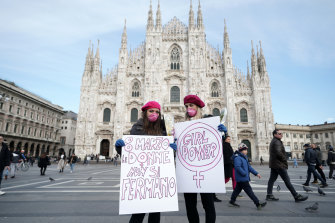 Italy's most stringent measures – included in a decree signed by Conte and published on the government's website – apply to a population of almost 17 million people in Lombardy, the region around Milan that has been hardest hit by infections. The decree affects vast swathes of Piedmont, Veneto, Emilia Romagna and Marche. Venice is part of the affected zone, while Turin, home to the Fiat Chrysler Automobiles headquarters, is outside of it.

Overall, the rules impact a region of 56,000 square kilometres that accounts for about a third of Italy's gross domestic product. 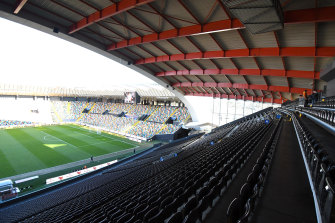 The Serie A match between Udinese Calcio and ACF Fiorentina went ahead behind closed doors at Stadio Friuli in Udine.Credit:Getty Images

The decree also issues new regulations for the rest of the country, including a recommendation to avoid travel outside home towns unless absolutely necessary, enforcing "social distancing" of one metre in all public venues and restricting all public events from demonstrations to theatre shows. Elderly people are advised to stay home, and schools and universities will remain closed nationwide until at least March 15. 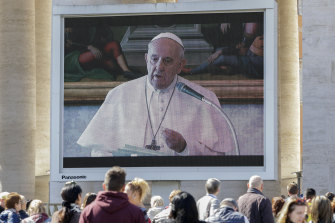 Pope Francis delivered the Angelus prayer via a giant screen in a busy St Peter’s Square on Sunday.Credit:AP

Failing to respect the measures is a criminal offence and might lead to a fine or imprisonment. Some regions voiced resistance. The Veneto region opposes the inclusion of the Padua, Treviso and Venice provinces in the decree.

Maurizio Rasero, the mayor of Asti, which is in the affected zone, called the ban "madness, a disaster we didn't expect."

The south-eastern region of Apulia said that people coming into the area from the affected regions will be subject to a 14-day quarantine. Regional president Michele Emiliano went one step further, telling his northern compatriots to turn around and go back home, according to comments published by Ansa, the Italian wire service.

With Italy's economy already contracting before the outbreak, the crisis has all but paralysed business activity in Lombardy, which accounts for a fifth of the country's gross domestic product, and the rest of the north.

National airline Alitalia said on Sunday it would suspend all international and domestic flights to and from Milan's Malpensa airport from Monday until April 3, with the last plane arriving New York at 10.40am local time. It will also stop international flights from the Milan's Linate airport, instead operating routes through Rome's Fiumicino. Services from Venice to Rome will continue at a reduced level.

The impact is clear even in other regions that aren't subject to the stricter controls. The Pompeii archaeological site near Naples and the Vatican museums are closed until April 3, and an exhibit of Renaissance master Raphael in Rome has been halted.

The government decided on Thursday to double emergency spending to €7.5 billion euros ($12.7 billion) to help cushion the economic impact of the virus.

It is also calling up 20,000 doctors, nurses and medical personnel to help deal with the outbreak. Fallout from the virus' spread is slamming Italy's key tourism industry, worth almost 15 per cent of GDP, at a time when the country is already teetering on the brink of recession.

The European Commission's top economic officials approved Italy's spending plans, saying in a letter to the government in Rome that the stimulus won't be factored in when assessing the country's compliance with the European Union's fiscal rules.

The symptoms of coronavirus include fever, cough, shortness of breath and breathing difficulties. If you suspect you or a family member has coronavirus you should call (not visit) your GP or ring the national Coronavirus Health Information Hotline on 1800 020 080.