Benchmark of pettiness! Council jobsworths tell kindly neighbour who put wooden seat outside his flat for others to enjoy a rest that they will take it away and sell it

A friendly neighbour was given a ‘ludicrous’ note from the council ordering him to remove a bench he placed outside his flat for a rest from walking.

Steve Owens, 60, decorated the small communal area outside his council flat in Poole, Dorset, with flowers and a small two-seater bench.

The father-of-two suffers from health issues that affect his mobility, meaning he can’t walk very far and he would use the bench for having a rest on hot days or when he looked after the plants.

He was shocked when ‘jobsworths’ from the council gave him a deadline to get rid of the bench before they sold or disposed of it, citing health and safety reasons. 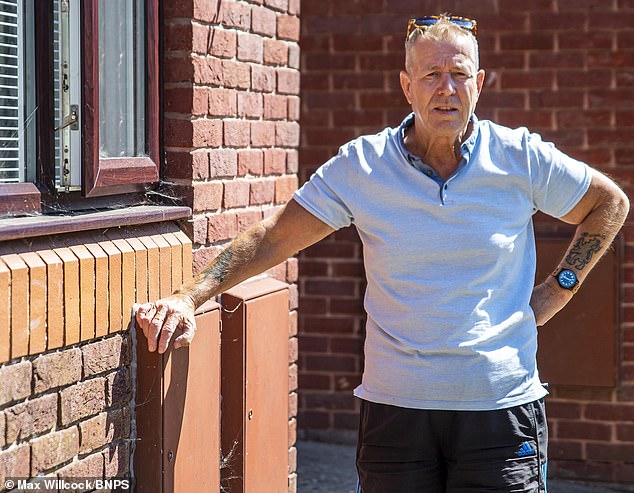 Steve Owens, 60, put a communal bench outside his flat for himself and his neighbours to enjoy. Pictured: Steve standing where the bench used to be

Steve said: ‘I read the notice stuck to the bench and I said “you’ve got to be joking”.

‘It’s a two-seater bench that someone could pick up with one hand. I was only trying to make the communal area look nice. It’s ludicrous.

‘There’s only one council bench for 60 residents. Mine was there for everybody to enjoy.’ 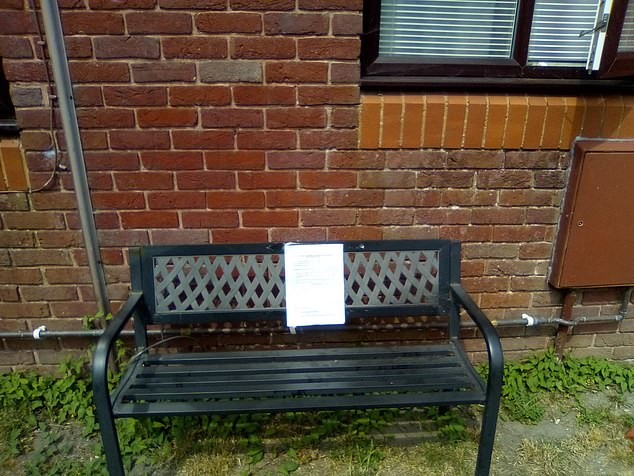 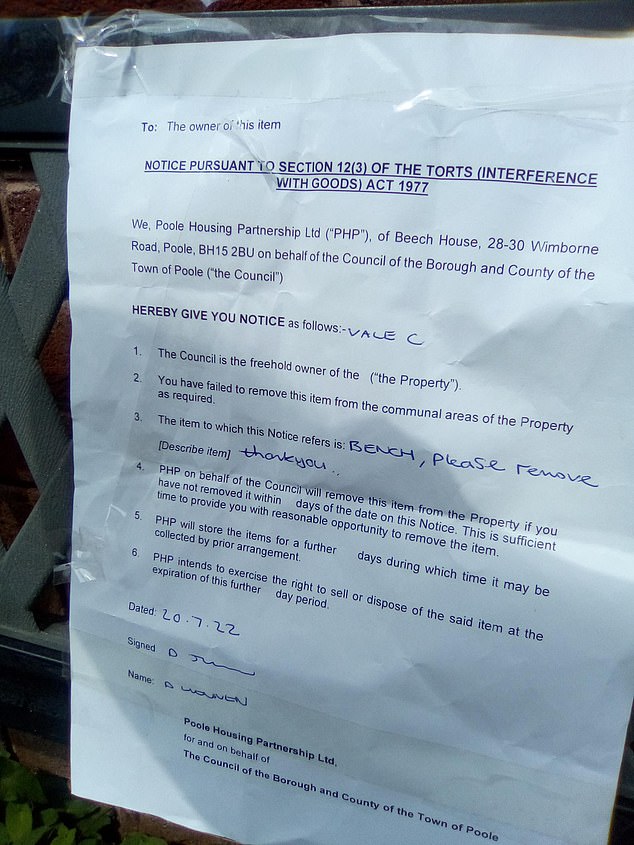 The note, dated July 20, gave Steve a deadline to remove the bench or said Poole Housing Partnership would dispose of it or sell it on

The manager of the apartment complex said the bench posed a risk to the gas pipe fixed to the wall.

But although the retired builder had attached the metal bench to the outside wall of his flat to stop it being stolen, it wasn’t in contact with the gas pipe.

He said there was no health and safety issue because the bench didn’t provide a fire hazard or risk of a gas leak.

Steve said he was told it was illegal to attach anything to the walls while on the phone with the manager. 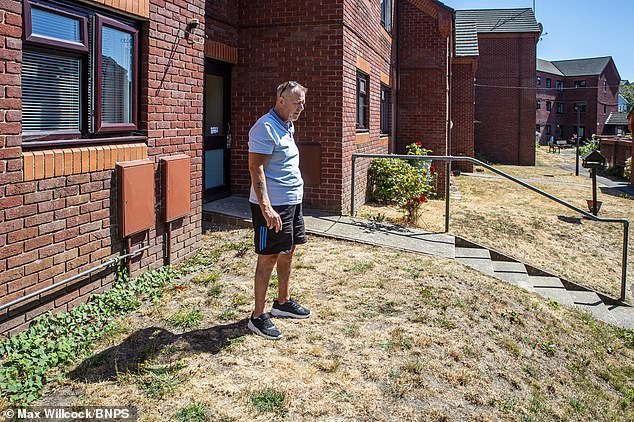 Steve, pictured in the communal area outside his flat, has now removed the bench

Steve said: ‘So I told him he had better go around and get rid of all the hanging flower baskets.’

The 60-year-old has now removed the bench.

The notice on the bench read: ‘You have failed to remove this item from the communal areas of the property as required.

‘PHP (Poole Housing Partnership) on behalf of the council will remove this item from the property if you have not removed it.’ 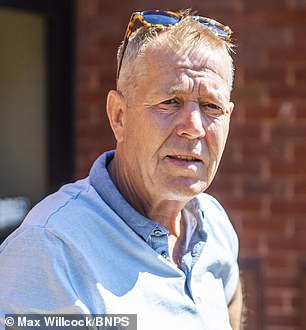 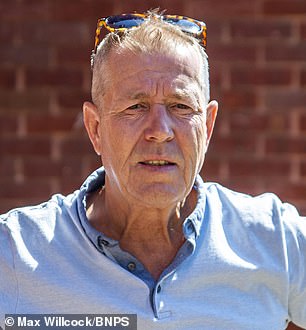 The retired builder suffers from mobility issues and used the bench for a rest, especially on a hot day

Bryony Hide, the daughter of one of Steve’s neighbours, posted on social media: ‘There is absolutely nothing wrong with this bench. It’s on a raised part of grass outside his windows that only him and his friends use.

‘The council and housing are just jobsworths. This is causing no harm or issues at all.’

A Bournemouth, Christchurch and Poole (BCP) Council spokesperson said: ‘The bench in question was placed in the communal grounds without permission. It has been removed, but no eviction notice has been served in relation to this issue.

‘BCP has provided wooden benches elsewhere in the communal grounds at Vale Close to facilitate the mixing and socialising of tenants.’ 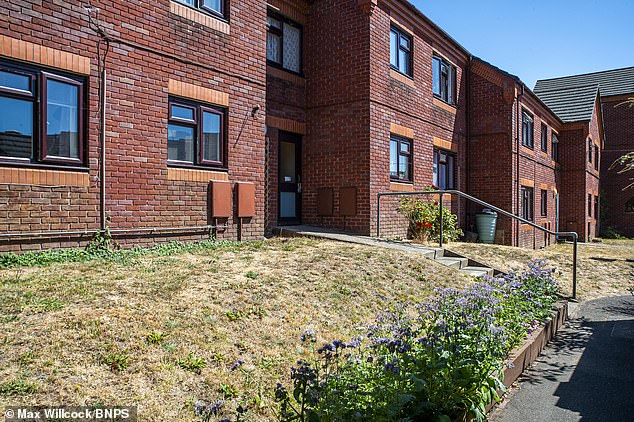 Steve said: ‘It’s a two-seater bench that someone could pick up with one hand. I was only trying to make the communal area look nice. It’s ludicrous.’ Pictured: the communal area outside Steve’s flat in Poole, Dorset 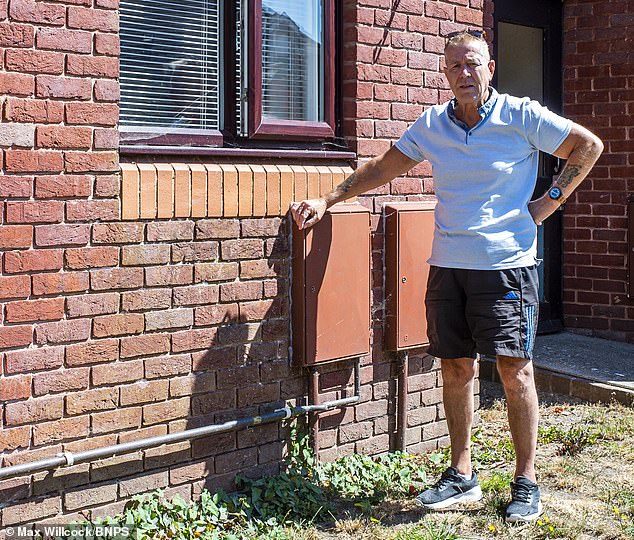 The communal area only has one bench between 60 people. Pictured: Steve where his bench once stood