Brussels: Johnson & Johnson will resume the rollout of its coronavirus vaccine in Europe after the European Union’s drug regulators said a warning should be added to the product indicating a possible link to rare blood clots, but that the shot’s benefits outweighed the risks.

“The reported combination of blood clots and low blood platelets is very rare, and the overall benefits of COVID-19 Vaccine Janssen in preventing COVID-19 outweigh the risks of side effects,” the European Medicines Agency said in a statement, referring to the division of Johnson & Johnson that develops vaccines, Janssen. The rare clots were “very similar”, the agency added, to those associated with the AstraZeneca vaccine, for which the agency made a similar recommendation. 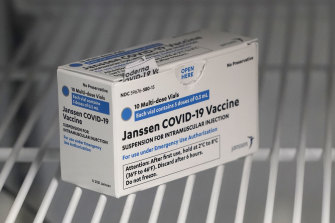 Johnson & Johnson decided to delay its rollout in the bloc’s 27 member states last week, after regulators in the United States called for a pause following concerns about the potential serious side effect.

The EMA’s recommendation is not binding, but it is the first indication of what might happen next with the European rollout of the much-anticipated, single-shot vaccine that’s already been given to nearly eight million people in the United States. The agency said that regulators in individual EU member states should decide how to proceed taking into account their particular case load and vaccine availability.

Meanwhile, a German scientist studying the extremely rare blood clots linked to the AstraZeneca COVID-19 vaccine said Johnson & Johnson has agreed to work with him on his research.

Andreas Greinacher, a transfusion medicine expert at Greifswald University, wants J&J vaccine samples to study in his lab. Since mid-March his team has been analysing specimens from people who suffered clots after getting AstraZeneca’s shot. 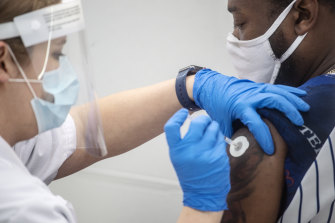 “We agreed today with [J&J] that we will work together,” Greinacher said during a news conference. “My biggest need, which I’ve expressed to the company, is I would like to get access to the vaccine, because the J&J vaccine is not available in Germany.”

Johnson & Johnson did not immediately respond to a request for comment.

On Tuesday (Wednesday AEST) Greinacher released a new paper offering a potential explanation for the complications.

The EMA said it suspected the vaccine may trigger an unwanted immune response, but safety committee chairwoman Sabine Straus said it has not identified specific risk factors.

“It would be very helpful if we know beforehand whether it might be some kind of genetic disorder, or something else in the blood vessels,” Straus told reporters.

Greinacher does not believe such a prognostic test is likely, based on experience with a similar disorder called heparin-induced thrombocytopenia that has defied efforts to identify why some people may be predisposed to the serious condition.

“We even completely gene-sequenced 3000 of these patients, and we couldn’t find a genetic predisposition,” he said.

In Greinacher’s new, not yet peer-reviewed, paper he suggests the technology behind AstraZeneca’s shot, some of its ingredients and the powerful immune reaction it induces, may contribute to a cascade of events that overpowers numerous mechanisms that normally keep the human immune system under control.

Health regulators and scientists are exploring whether the clotting problem may affect the whole class of so-called viral vector vaccines, which EMA’s Straus said was possible while noting differences in the two shots.

Both the AstraZeneca and J&J vaccines use a common cold virus, albeit different ones, to ferry instructions to cells to produce an immune response. J&J’s shot uses a human adenovirus, while AstraZeneca uses a chimpanzee adenovirus.

“Individuals are different, and only if by coincidence, nine or 10 weaknesses are coming together, then we have a [problem],” Greinacher said. “Otherwise, our in-built security systems block it, and keep us safe.”

The EMA said it had come out with its recommendations ahead of US regulators doing so because it had built some confidence in how to respond, after having spent much time reviewing similar cases that arose with the AstraZeneca vaccine.

In its statement, the agency stressed the importance of treating the potential side effect and issued guidelines to healthcare professionals on the lookout for the rare clotting disorder.