Inside Putin’s ‘torture dungeons’: Former nuclear bunkers where prisoners ‘are mutilated with surgical tools’ in Ukraine

Former nuclear bunkers are being used to hold prisoners where they are tortured by Putin-backed thugs in war-torn Ukraine, civil rights groups have claimed.

Photographs have been released allegedly showing chilling torture dungeons where prisoners of Russian-backed rebels are mutilated with surgical tools.

It has been claimed that more than 200 people – including civilians – are being held captive in the facilities found in eastern Ukraine, close to the Russian border.

In the prisons, allegedly being run by Kremlin-backed Ukrainian separatists inside former nuclear bunkers, the prisoners are said to be subject to electric shocks, beatings with hammers and mutilations with surgical tools.

Pictured: A room allegedly inside a torture dungeon in Ukraine run by pro-Russian rebels, where they are said to have been holding and torturing people

The conflict known as the War in Donbas has raged since 2014 and left the former Soviet-state split, and has resulted in the death of more than 13,000 people and to roughly 1.1 million people fleeing their homes.

Justice for Peace (JFP) in Donbas, an alliance of 17 Ukrainian human rights organisations and local media, claimed that a vicious torturer known as ‘the Maniac’ uses one of the dungeons as a torture playground.

The Maniac, whose real name is believed to be Serhiy Konoplytsky, is said to be the one who uses surgeon’s tools on the prisoners, as well as a plastic pipe and a hammer to inflict savage beatings.

The The Centre for Civil Liberties (CCL), based in Kyiv, told the Sun that there are currently 267 people locked up in these dungeons without facing any charges – including 226 civilians.

One of the notorious dungeons is the ‘Isolation Prison’ in Dontesk, while another is called the ‘Batman Prison’ in Luhansk, and is named after the pro-Russian ‘Batman Rapid Response Group’ whose leader – Alexander Bednov – was assassinated in 2015.

The brutality of the dungeons is said to be deigned to terrorise locals and deter opposition efforts, with the ‘Isolation Prison’ being dubbed by locals as ‘The Place Where People Disappear’. 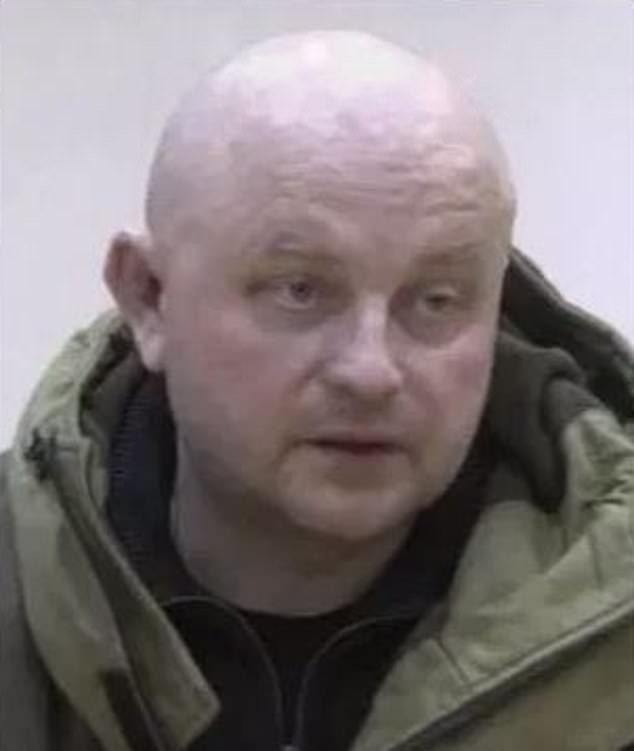 The Maniac, whose real name is believed to be Serhiy Konoplytsky (pictured), is said to use surgeon’s tools on the prisoners, as well as a plastic pipe and a hammer to inflict savage beatings

Prisoners have spoken of being subject to horrific torture methods as well as being witness to other victims being beaten to death.

They have said some had been shocked with wires attached to the genitals, had their fingers bent until they have broken, and have been beaten by former boxers.

Speakers inside the facility play the sounds of prisoner’s screams, it has been claimed, while inmates are stripped naked and left to sleep on wooden pallets beneath blinding lights that are on 24-hours a day.

These is no evidence to suggest that Russia is directly orchestrating the horrific human rights abuses. 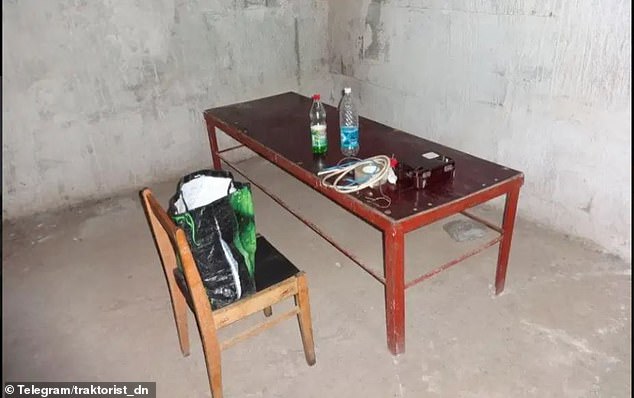 One image shows a military field telephone that is used to electrocute the prisoners, sitting on a table in a dank looking cell (pictured) 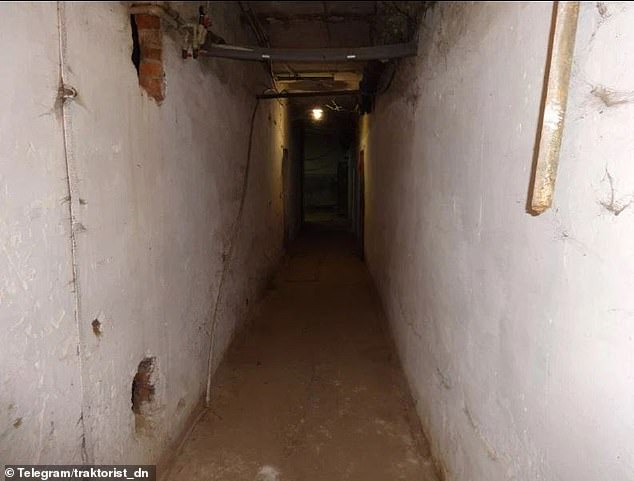 Pictured: A pictured of a corridor allegedly in the basement where prisoners are kept

It is here that the leaked photographs – that have been posted by an anonymous source on Telegram – allegedly show, as well as tools used by the Russian-backed rebels and the mercenaries that fight with them.

One image shows a military field telephone that is used to electrocute the prisoners, sitting on a table in a dank looking cell.

Another appears to show one of the rooms the prisoners are forced to live inside, with concrete slabs on the floor as beds and very few blankets.

A picture taken from over a fence is said to show the tiny outdoor space – covered in barbed wire – that prisoners are allowed to use for outdoor exercise.

A post from the JFP says that people have been imprisoned for a variety of reasons, including ‘denunciations by neighbours’, for holding alleged pro-Ukrainian views, alcohol consumption and curfew violations

In one case, a young man was detained for throwing a firecracker and scaring an elderly woman.

In the ‘Batman Prison’, JFP reported that prisoners received water in plastic bottles twice a day, and were fed twice – once in the afternoon and once at midnight. 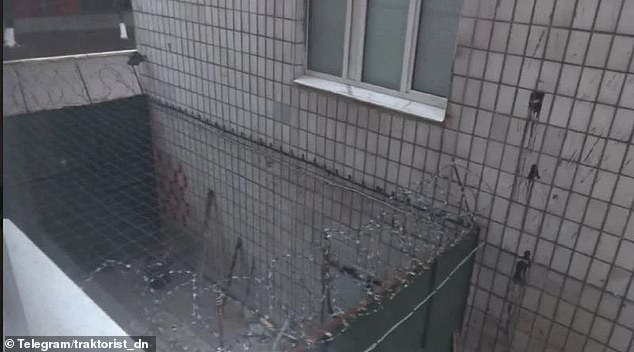 Pictured: A picture taken from over a fence is said to show the tiny outdoor space – covered in barbed wire – that prisoners are allowed to use for outdoor exercise

The meals were made up of a bowl of barley, buckwheat or barley groats, JFP claims, and for some prisoners the food was left to cool before being given.

There was also no medical care, the group claims, with a nurse coming once every few days to dress gunshot wounds.

In some cases, doctors were said to have even helped the torturers to bring round the victims after they passed out so the torture could be resumed.

One man – civil servant Oleksandr Grishchenko – spoke about his experiences in the ‘Batman prison’ where he was tortured after being wrongly accused by being a spy by a henchmen for the Putin-backed Luhansk People’s Republic.

He told Euromaidan Press – that reports on the Russian puppet state – that was beaten by a former professional Boxer.

Then, he said he was stripped naked ad electrocuted before his arms were stretched and tied up, at which point he was introduced to ‘The Maniac’.

The torturer broke one of his fingers, before ”He took out the tarpaulin cover of the surgeon’s field kit, unwrapped it, and started to show me the surgical instruments,’ Grishchenko told the outlet. 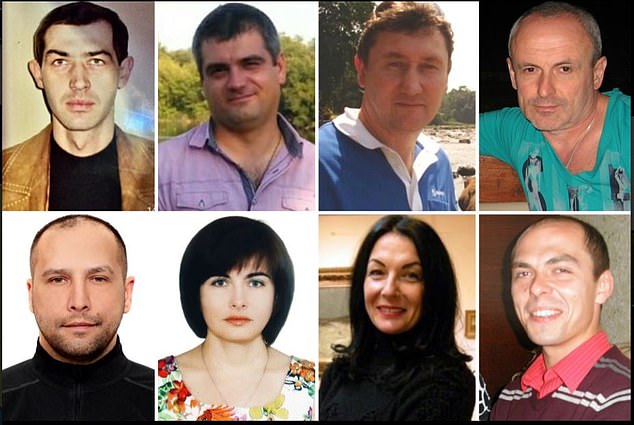 Pictured: Some of the people the Centre for Civil Liberties says are imprisoned in the cells 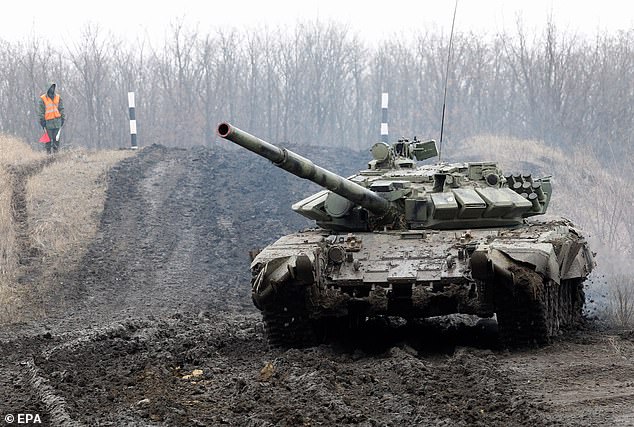 Pictured: A tank of pro-Russian militants of self-proclaimed Donetsk People’s Republic (DPR) rides during a military exercise at a shooting range not far from them controlled city of Gorlivka, Ukraine, 28 January 2020 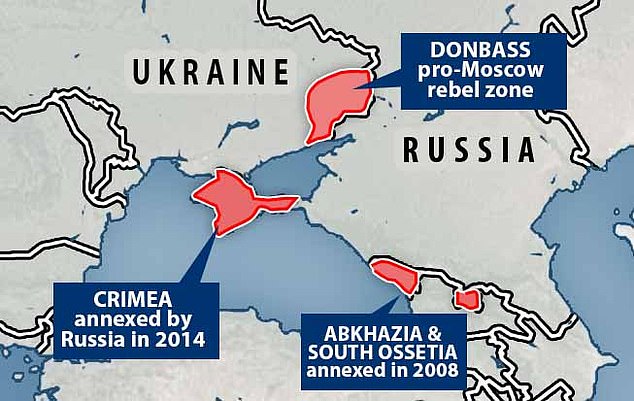 ‘In a few minutes, his assistants brought a door leaf, dumped me on it,’ he racalled. ‘My left arm was fixed… the Maniac started to make a surgical saw cut between the fingers of my left hand.’

The Maniac reportedly told him that he would torture him ‘as much as necessary until we get the desired result’. In another instance, Grishchenko said that The Maniac beat a man to death with a hammer.

A spokeswoman for CCL told The Sun: ‘This is just the tip of the iceberg. ‘Most people who have been suspected of disloyalty to the occupation authorities are prosecuted and sentenced for espionage, sabotage and treason.

‘Their families often do not turn to the state authorities of Ukraine or human rights organizations. They are either intimidated or simply understand that there are no opportunities to evacuate a person to Ukraine.’

As a result, the CCL says that it does not know the full scale of the abductions, illegal detention and torture of people inside the occupied territories.