Having flung himself headlong into the frenetic world of Silicon Valley start-ups, Prince Harry could be forgiven for taking one of the five ‘inner work days’ allotted to staff by his generous new employer and enjoying some time out to ‘completely unplug’ and ‘self-reflect’.

For the past couple of months, the Prince has been working as ‘Chief Impact Officer’ at BetterUp, a US-based professional coaching and mental health app.

And while the 36-year-old’s brand-new fancy job title and rumoured seven-figure salary have been ‘specially crafted’ for him by the company’s CEO, the fast-paced, cut-throat profession he has entered is not for the faint-hearted.

Fortunately for Harry, when the going gets tough at BetterUp’s California HQ, its employees have access to a host of perks and benefits to brighten up their working day. 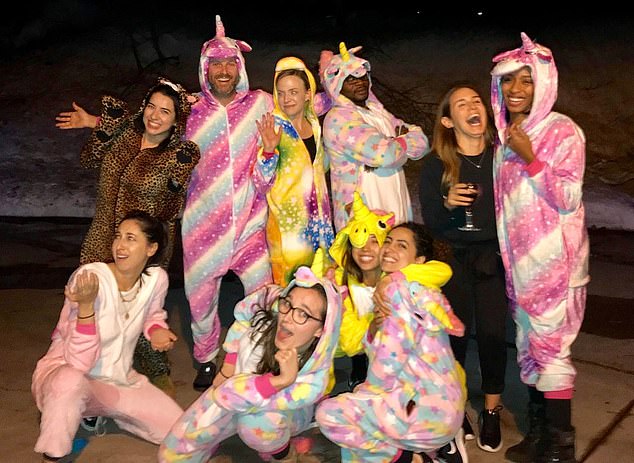 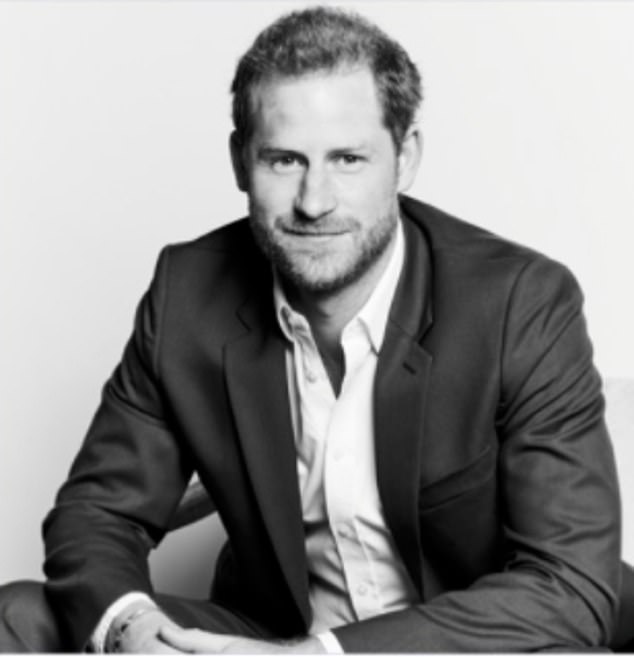 There’s the office dog, Gordo, who hangs around the firm’s open-plan, industrial-chic offices in San Francisco, waiting to be petted.

Filled with plants and brightly coloured furniture, the light-filled office features a library kitted out with armchairs and a studio for yoga sessions.

And while naked billiards for which Harry once showed such enthusiasm may not be on offer, there are plenty of board games to help staff unwind.

Now and then, the BetterUp employees even like to dress up and lark around, although Harry would be ill-advised even to think of resurrecting the Nazi uniform he once hired for a party from Maud’s Cotswold Costumes in Gloucestershire.

At BetterUp, unicorn onesies are more the order of the day for its super-woke staff. But if all of this fails to put a smile on Harry’s face, there’s always the office punch bag, which can be used to let out any pent-up tension he may accumulate in the course of his duties.

However so far, according to his new boss, so good. BetterUp co-founder and CEO Alexi Robichaux said this week that he has been ‘impressed’ with his new recruit’s ‘incredible attitude’ and ‘energised’ by Harry’s ‘model of inspiration and impact through action’. 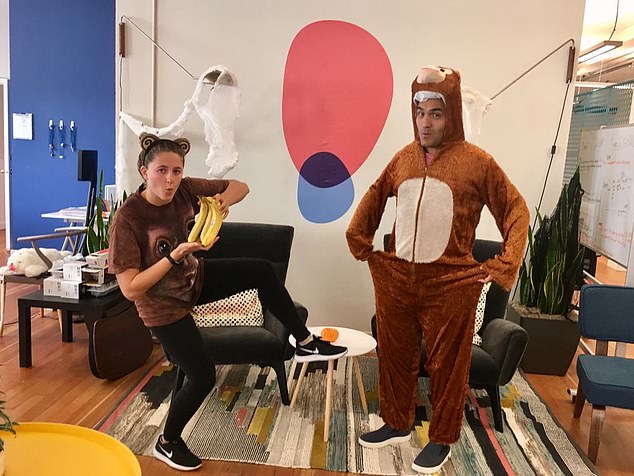 Fortunately, for Harry, when the going gets tough at BetterUp’s California HQ, its employees have access to a host of perks and benefits to brighten up their working day (staff in fancy dress)

Luckily for Harry, there was no stressful interview process when it came to getting his first job since giving up his royal duties and leaving the UK. He and Robichaux ‘crafted’ the Prince’s new role together after an introduction by an unnamed mutual friend.

The American businessman said this week that Harry is ‘helping to change the dialogue around mental health’.

‘Bigger than commercial success, this is about global impact,’ Robichaux enthused.

‘So as we crafted the role together, those four buckets of opportunities, we came to the title “chief impact officer”, really denoting that he’s focused on our mission and he’s focused on ensuring we’re doing everything we can to achieve our mission on a larger and grander scale to impact the lives of more people.’

The Prince certainly appears to have happily settled into his role at the company, which claims to use artificial intelligence to deliver personalised coaching sessions designed to nourish ‘the whole person’.

The app – dubbed ‘life coaching Tinder for millennials’ (Tinder being a global online dating forum) – focuses on performance and wellbeing at work and is designed primarily for corporate use as an employee benefit. 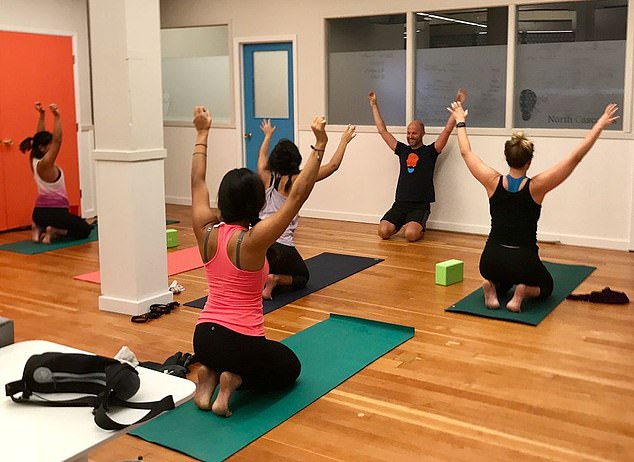 Filled with plants and brightly coloured furniture, the light-filled office features a library kitted out with armchairs and a studio for yoga sessions (pictured)

Previously, it only sold its services to companies with more than 10,000 employees, although it now allows individuals to sign up, giving them one free coaching session before they are matched with a coach and asked to subscribe.

‘Self-optimisation is not about fixing something that’s broken,’ Harry said in a statement about his new job. ‘It’s about becoming the best version of ourselves’.

Despite the fact that the company has trumpeted his arrival on its website by describing him as Prince Harry, the Duke of Sussex, he has humbly requested that his new colleagues address him only by his first name.

And while the company, which has been valued at $1.73billion (£1.2billion) following a $125million investment round, has been accused of wanting to harness his royal profile to promote its product, the Prince has also, apparently, even helped make a business decision.

At a recent strategy meeting to discuss the BetterUp app, Harry is said to have ‘recommended that executives frame the tool in terms of resilience and overcoming adversity and setbacks in challenging times’.

A flying professional start, then, for the Eton-educated Duke, who left school at 18 with two A-levels in art and geography and took a gap year before attending Sandhurst then joining the Armed Forces.

Reflecting on his high-flying and lucrative executive business role this week, he said: ‘What I’ve learned in my own life is the power of transforming pain into purpose.’ He added that his time in the British military had also taught him that ‘we don’t just need to build physical resilience but also mental resilience’.

How to achieve that is, without a doubt, becoming the billion-dollar question of the day for every Forbes-listed, Fortune 500 company.

Employee coaching is one of the fastest growing trends in business thanks to a highly demanding generation of millennial workers who now insist on finding meaning, fulfilment and happiness in the workplace.

BetterUp, founded in 2013, provides professional coaching, counselling and mentorship to your mobile phone, and is one of a handful of apps which promise to improve employee happiness, retention and – all importantly – productivity, through counselling and behavioural psychology.

Its 35-year-old co-founder and CEO Robichaux, a former Walt Disney employee and University of Southern California graduate, says he is on a mission to turn self-improvement into a science and ‘improve human existence’.

Its network of over 2,000 coaches serves more than 100,000 members and offers coaching services to its own staff, including talks on ‘how to beat burnout’ and ‘build mental fitness’. There are sessions on ‘taking bold action for inclusive leadership’ and what to do if you want to ‘be you at your best’.

According to its own outcome surveys, its confidential, on-demand coaching sessions can reduce stress by 24 per cent. Some companies, says BetterUp, reported increases of performance of up to 26 per cent and a reduction in burnout of 15 per cent.

All of this comes at a hefty price for companies, including Facebook, Google, NASA, Hilton, Snapchat owner Snap and oil firm Chevron, all of whom use BetterUp’s services for their employees.

Corporate access to the app, including virtual classes and coaching sessions, costs around £2,600 per person for 12 months’ membership. Those who subscribe can browse options via a Tinder-style swipeable interface and can get access to several specialists dealing with topics such as diversity, inclusion, sleep, nutrition and ‘navigating uncertainty’.

New app users are asked to fill out an initial 157-part ‘whole person model assessment’ with questions ranging from feelings towards colleagues to out-of-work friendships and sleeping habits.

One even asks: ‘How much attention do you pay to the ingredients in your food?’ Workplace Personality scores are given for qualities such as ‘growth mindset’, empathy and ‘cognitive ability’.

But the app has drawn criticism, too, for not explicitly addressing disabilities such as ADHD and autism and referring more generally instead to ‘health and wellness’, ‘mindfulness’ and ‘stress’.

Harry himself, however, has given the app his royal seal of approval, describing how he has found working with a ‘truly awesome coach’ to be ‘invaluable’.

He said his coach had given him ‘sound advice’ and ‘a fresh perspective’ and, explaining why he was joining BetterUp this week, added that ‘focusing on and prioritising our mental fitness unlocks potential and opportunity we never knew we had inside of us’.

But BetterUp is not without its critics. While reviews of the company by current and former employees are generally positive, there is also a significant amount of internal criticism of its workplace ethos, ironically, much of it centring on overwork and burn-out.

Dozens have left anonymous reviews on glassdoor.com, which publishes company ratings and reviews by employees with the aim of increasing workplace transparency.

There are complaints about ‘too much ego at the top’ and the appointment of ‘very inexperienced leaders from a business perspective’. One former unnamed staff member, who spent three years at BetterUp, wrote last month: ‘Talks the talk, does NOT walk the walk’.

The employee went on to cite: ‘Terrible work-life balance, leadership suffered from a general lack of empathy making it hard to ask for help when you need it. You are encouraged to support the mission and push forward, despite the toll it may have on your mental health. Most people are overworked, burnt out.’

In a section headed ‘advice to management’, the ex-employee wrote: ‘Reduce favouritism, eliminate people from positions that don’t deserve to be there.’

Yet another employee, writing in July, described the company as ‘a sinking ship in a blue ocean’.

For the time being, however, Harry is clearly excited about his new job. ‘My goal is to lift up critical dialogues around mental health, build supportive and compassionate communities and foster an environment for honest and vulnerable conversations,’ he said, without explaining how this highfalutin jargon will translate into real-life concrete action.

‘We can and will elevate the global conversation around our mental health. What we’re doing is equipping people to thrive.’

Thriving is something that is clearly of the utmost importance to the Duke and his wife, who famously said during their 2019 tour of Africa: ‘It’s not enough to just survive something… you’ve got to thrive.’

In addition to his new job at BetterUp, it emerged yesterday that Prince Harry has also joined the Aspen Institute, a think tank looking into information and disinformation in the US media. Whether or not both these new roles will bring Harry the fulfilment he has been searching for remains to be seen.