Beijing: They are businessmen, born in mainland China, who serve on top advisory committees to Beijing and profess patriotism for the motherland. One recently travelled to an obscure village in south-eastern China to study Xi Jinping's doctrine for guiding the country to greatness.

Now, they are seeking to bring that ardour to Hong Kong, as the founders of the city's newest political party. They are calling for social stability to unify a deeply fractured society and mend a damaged economy. 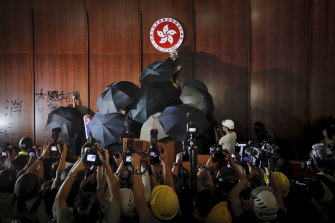 "You cannot have a protest every day," said Li Shan, founder and chairman of the party.

The arrival of the Bauhinia Party has fuelled furious speculation about the future of Hong Kong's once-vibrant, at times unruly, political scene. The party, led by business executives who moved to Hong Kong from the mainland, is entering the fray amid forceful moves by the Chinese government to quash dissent, after huge pro-democracy protests in 2019 challenged its rule.

Already, authorities have ejected opposition lawmakers from the Hong Kong legislature and disqualified and arrested would-be candidates. Many in the pro-democracy camp see the new party as yet another sign that Hong Kong — a former British colony that was promised 50 years of semi-autonomy when it returned to China in 1997 — is becoming just another mainland city.

But the news was equally, if not more, unsettling for Hong Kong's pro-Beijing bloc, the coalition of local business tycoons, established politicians and trade unions that has long been allowed to govern as the central government's proxy. Many have wondered if the emergence of the new party is Beijing's signal that it has less use for those traditional power brokers and may replace them with figures deemed more effective or trustworthy.

While the pro-Beijing camp has always professed loyalty to the central government, its members have taken care to emphasise the differences between their city and the mainland.

The Bauhinia Party appears to be offering itself to Beijing as a new model for allies, ones who are more overt about their ties to the central government and their admiration for its top-down approach. 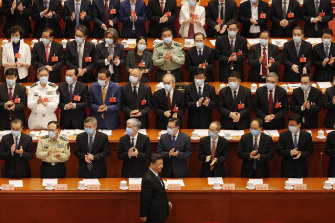 Li Shan, founder of the Bauhinia Party is a delegate to the Chinese People’s Political Consultative Conference, which was attended by Chinese President Xi Jinping in Beijing last May. Credit:AP

Li is a delegate to the national Chinese People's Political Consultative Conference, an advisory body to Beijing, and speaks hardly any Cantonese, Hong Kong's local language. Another co-founder, Chen Jianwen, is a delegate to a regional arm of the advisory body and leads an association for alumni of a training academy for Communist Party officials.

Central planks of the party's platform include combating discrimination against mainland transplants to Hong Kong and fostering a love of Chinese language and culture. Li said he wants to encourage more Hong Kong students to study at mainland universities and undergo "patriotic education," an echo of Xi's own calls for young Hong Kongers to "increase their sense of belonging to the motherland."

Even the way Li established the party nodded to the central government. He officially founded it aboard a cruise ship in Hong Kong's Victoria Harbor, a reference to Mao Zedong's founding of the Chinese Communist Party aboard a boat in eastern China, according to party lore.

Perceived allegiance to Beijing could be the most important factor for securing the central authorities' blessing in the coming years, said Willy Lam, a professor of Chinese politics at the Chinese University of Hong Kong.

If more people with mainland backgrounds participated in Hong Kong politics, Beijing could "rest assured" that the city would be led by those who "would presumably be more loyal to the motherland," he added.

The Bauhinia Party's founders deny that they are puppets of Beijing or that they seek to supplant existing parties. Li said the party is focused on the selection of the city's chief executive, not on winning legislative seats.

The chief executive is chosen by a committee of just 1200 electors, many with close ties to Beijing.

While Li said he was not planning to run in next year's chief executive race, he hinted repeatedly that he was interested in the job someday.

"If the community requires me to devote myself for such a job or responsibility, I'm willing to sacrifice myself," he said in an interview in Beijing last month.

Li said he did not tell the central or Hong Kong authorities that he was starting a party until after he had done so. Then he notified Hong Kong's chief executive, Carrie Lam, and the Central Liaison Office, Beijing's official arm in Hong Kong.

He bristled at suggestions that he was an outsider. "I have been a permanent resident for 20 years," said Li, a financier who moved to Hong Kong in 1993 after completing a doctorate at the Massachusetts Institute of Technology.

The co-founders say they want to reach opponents of the government as well as supporters.

In its stated principles, the party professes a commitment to universal suffrage — a central demand of the pro-democracy camp — and a promise to make Hong Kong "one of the world's most free, democratic and open" cities. Li said he wants to preserve the structure of "one country, two systems," for an additional 50 years.

But the pro-democracy camp has dismissed those overtures as lip service. An editorial in Apple Daily, a fervently pro-democracy newspaper, called the party a "Trojan horse" that would allow the Communist Party to operate openly in Hong Kong. Lo Kin-hei, chairman of the Democratic Party, wrote on Twitter that it was the "Hong Kong branch" of the Communist Party.

The pro-Beijing camp has been equally hostile. Many have sneered at the Bauhinia Party's stated goal of attracting 250,000 members, about five times more than the largest pro-Beijing party in Hong Kong has. Li said on Friday that the party had fewer than 100 members so far.

"It is easy to start a party, but it is not that easy to establish your party as a viable political force," said Jasper Tsang, founder of that largest party, the Democratic Alliance for the Betterment and Progress of Hong Kong.

Tsang dismissed the idea that the Bauhinia Party had Beijing's backing or that Li could become chief executive. He pointed out that Hong Kong's two major state-backed newspapers had paid little attention to the new party, which he said suggested a lack of official support.

Regina Ip, the founder of another pro-Beijing party, said Li had approached her about possible collaboration and that she was "not in any way interested."

"I don't think he begins to understand how complex the job is," she said of Li's hints about running for chief executive. "If you have some financial credentials, it doesn't mean you are qualified."

Li acknowledged that he was not fluent in Hong Kong politics, despite his long residence in the city. He said he had never voted until late 2019. Asked about his position on a contentious proposal to allow Hong Kong residents living in mainland China to vote in the city's elections, he said he had not heard of the issue.

Some have been more amenable to the Bauhinia Party.

Christine Loh, a former pro-democracy lawmaker who also worked in the administration of a pro-Beijing chief executive, said she did not know much about the new party. But she said that Hong Kongers should be more open to political figures more aligned with the mainland system.

"It isn't that it's going to be extended to Hong Kong, but it's not totally unconnected," she said of the mainland system. It is possible, she said, that people with ties to it might be able to help Hong Kong.

While Li insists that he did not consult any Chinese officials before establishing his party, he acknowledged discussing some of its proposals with officials since then.

Last month, he visited a museum in Xiadang, a village where Xi worked as a young Communist Party cadre in the 1980s. Li said he wanted to learn more about the early development of "Xi Jinping Thought," Xi's ideological manifesto.

Another co-founder, Wong Chau-chi, demurred in an interview with The South China Morning Post when asked whether Bauhinia Party members were secretly Communist Party members.

"It's not correct to judge our party on whether we have underground members or not," he said. "It's something not relevant to our governance."